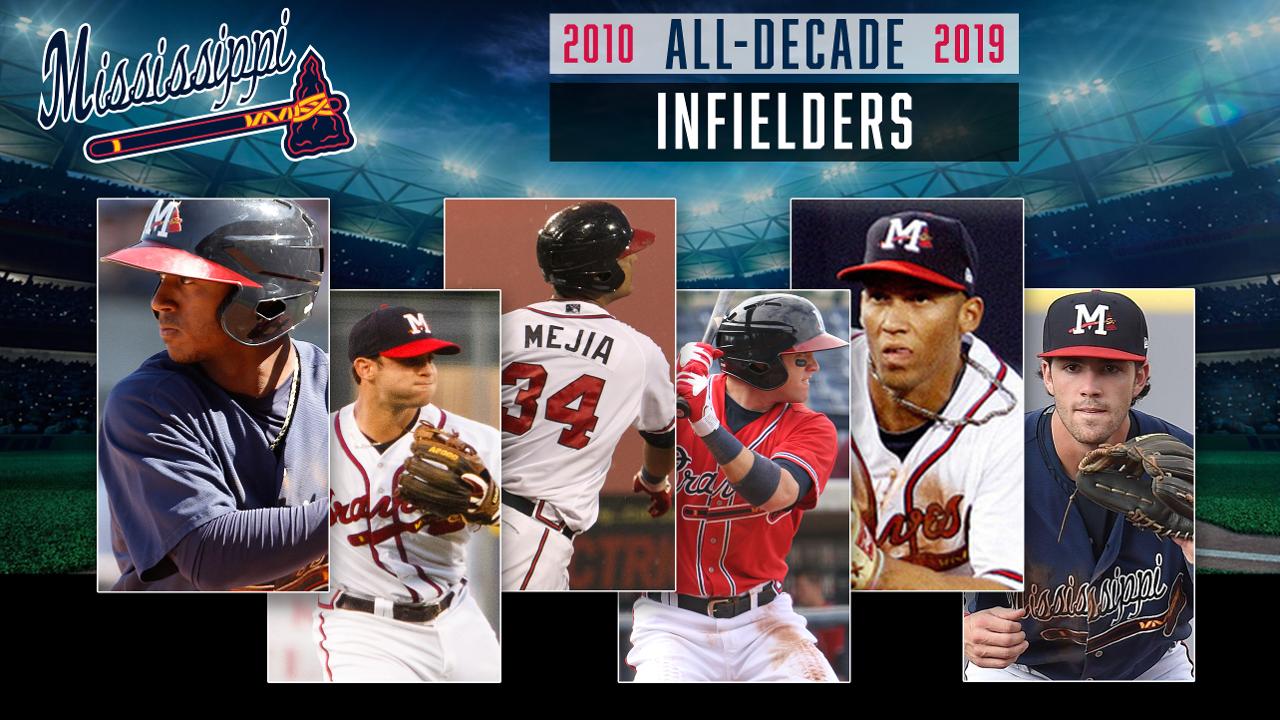 We move to the top infielders of the decade.

Ozzie Albies - The 2016 Southern League batting champ and Baseball America Double-A All-Star hit a club-record .321 for the M-Braves with 22 doubles, seven triples, four home runs, 33 RBI, 21 stolen bases and a .858 OPS over 82 games before a promotion to Triple-A.

Tommy La Stella - Had La Stella tallied 21 more plate appearances in his 2013 season for the M-Braves, he would have held the Southern League batting title and posted the best average in franchise history. Over 81 games, La Stella hit .343 with 21 doubles, two triples, four homers, 41 RBI, seven steals and a .896 OPS. After the season, he was named a Topps Double-A All-Star. The former eighth-round selection out of Coastal Carolina posted a club-record 23-game hitting streak from July 5 to August 5.

La Stella debuted at the major league level on May 28, 2014, hitting two singles in his first game. La Stella hit his first major league home run on August 8 against Stephen Strasburg of the Washington Nationals. He finished the year with a .251 batting average in 93 games. On November 16, 2014, the Braves traded La Stella, along with an international signing bonus slot, to the Chicago Cubs for Arodys Vizcaíno and three international signing bonus slots. Over 476 games with the Braves, Cubs, and Angels, La Stella is a .272 career hitter with 58 doubles, two triples, 26 home runs, and 138 RBI. He was named to the 2019 AL All-Star squad but did not play because of a tibia fracture. Before the injury, La Stella had been one of the Angel's most productive players. He had a .300 batting average with 16 homers and 44 RBIs in 78 games.

Ernesto Mejia - The only infielder on the All-Decade team to not make a big-league debut is Mejia. Regardless, the power hitter made the most of his 137 games in Mississippi during the 2011 campaign. With a two-homer night on September 3, 2011, the first baseman became the M-Braves career home run leader with 25 home runs. He broke Matt Esquivel (2006-07) and Michael Rosamond's (2005-06) previous number of 24 career home runs. Mejia finished the season with 26 homers, raising the bar for both career and single-season records. The Southern League All-Star is the club's single-season record holder in homers, games (137), hits (148), runs (82), RBI (99), slugging (.531) and OP (.906).

Tyler Pastornicky - The star shortstop capped off his stellar tenure with the M-Braves by completing what is still the only cycle in club history on July 5, 2011. He did so with an eighth-inning triple to right-center against the Jackson Generals. After striking out in his first at-bat, Pastornicky launched a homer to left in the third inning, singled in the fourth and doubled in the fifth. He lined out in the seventh before the history-making triple. Pastornicky led the club with five triples and 20 stolen bases during an All-Star season. On July 15, 2010, the Blue Jays traded Pastornicky along with Álex González and Tim Collins to the Braves for Yunel Escobar and Jo-Jo Reyes. The fifth-round pick of the Jays finished 2010 with Mississippi. In total, he hit .257 in 115 games with 35 stolen bases in 44 attempts. Pastornicky played 2011 mostly with Mississippi, but also played 27 games for Triple-A Gwinnett. With Mississippi, he hit .299 in 90 games and stole 20 of 28. He was named to the Southern League All-Star Game. In 127 games in Mississippi, Pastornicky hit .286 with 18 doubles, seven triples, eight home runs, 51 RBI, and 31 stolen bases.

Pastornicky was called up to the majors for the first time on September 28, 2011. He made his major league debut on April 5, 2012, as the Opening Day shortstop for the Braves against the Mets. Pastornicky recorded his first hit that day, a triple off of Ramón Ramírez. He was sent back down to Triple-A Gwinnett and was replaced by Andrelton Simmons, who was called up from Mississippi on June 2. Pastornicky was designated for assignment on January 8, 2015, and never played in the majors again. In parts of three seasons, he posted a .243 MLB batting average with 11 extra-base hits, 15 RBI, and two stolen bases in 124 career games for Atlanta.

Andrelton Simmons - The run of top prospect shortstops continued for the M-Braves in 2012 with Simmons. The Braves' second-round selection in 2010 was promoted to Atlanta on May 31 after just 44 games in Double-A. He became the 12th M-Brave to be promoted straight to Atlanta. The youngster made the most out of those 44 games, batting .293 with nine doubles, two triples, three homers, 21 RBI, ten stolen bases, and a .791 OPS.

The Curacao native made his Major League debut on June 2 against the Washington Nationals. He got his first hit, a double, on June 3. Simmons was named National League Rookie of the Month for June 2012 after hitting .333 with six doubles, three home runs, and 14 RBIs in June. He led all NL rookies in batting average and on-base percentage. In 2014, the Braves signed Simmons to a seven-year deal worth $58 million. On November 12, 2015, Simmons, along with catcher José Briceño, was traded to the Angels for Erick Aybar, Sean Newcomb, and Chris Ellis. The M-Braves alum is a four-time Gold Glove award winner and five-time Wilson Defensive Player of the Year. In 1,030 games for Atlanta and LA, Simmons has a .268 career batting average with 67 homers, 396 RBI, and 65 stolen bases.

Dansby Swanson - It's only fitting that another M-Braves star shortstop is the final member of this list. After 84 games in 2016, the former first overall pick in 2015 became the 20th M-Brave to be promoted to Atlanta, directly from Pearl. He joined the M-Braves at the end of April and posted a .261 average with 13 doubles, five triples, eight home runs, 45 RBI, six stolen bases and .745 OPS. The former Vandy star represented the M-Braves in the MLB Futures Game and Southern League All-Star Game in 2016.

On August 16, the Braves announced that Swanson would be promoted to the major leagues the next day. Upon his call-up, He went 2-for-4 in his MLB debut, including his first career hit off of Twins pitcher Kyle Gibson. Swanson hit an inside-the-park home run against the Nationals on September 6, his team's first such home run since 2001. With the hit, Swanson followed Paul Runge as the second Brave to make an inside-the-park home run his first career home run. Swanson finished the year in the majors, recording a .302 batting average, .361 on-base percentage, and a .803 OPS. So far, Swanson holds a career .245 batting average with 81 doubles, ten triples, 40 homers, 192 RBI, 26 stolen bases in 445 career games.