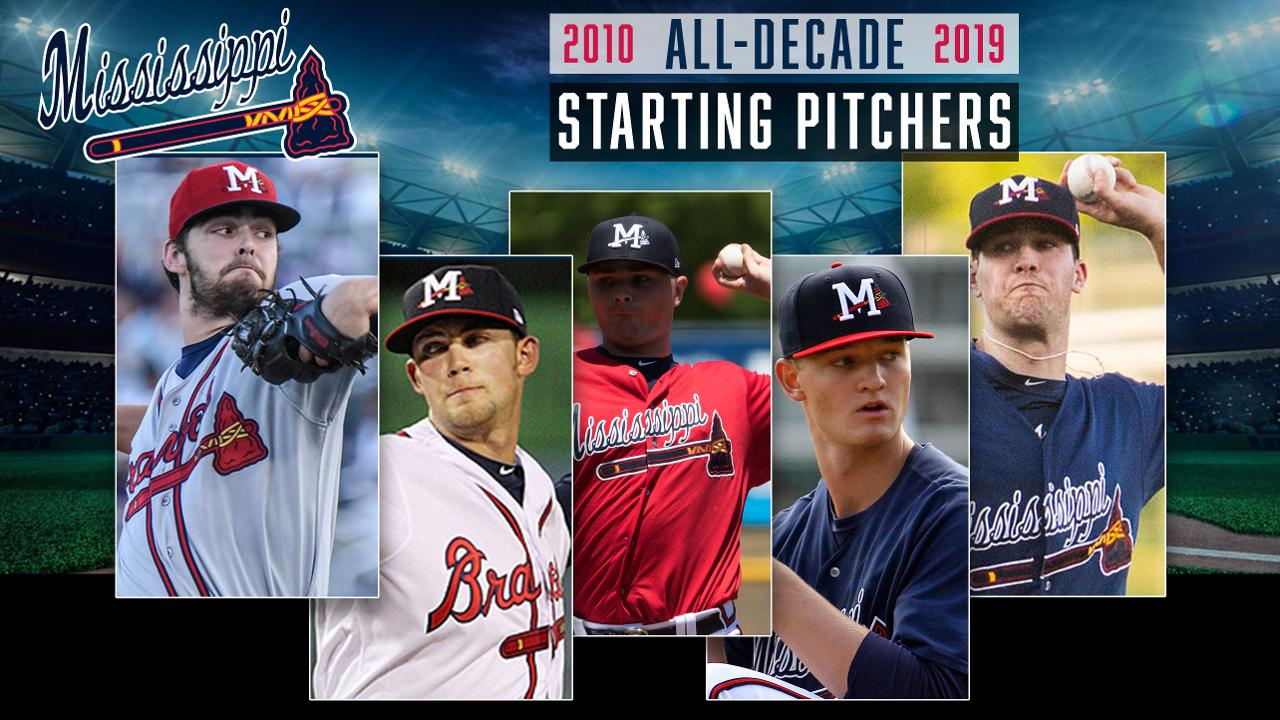 PEARL, MS - As the decade comes to a close later this month, the Mississippi Braves will be announcing their All-Decade squad from 2010 to 2019. The criteria for being named to the team are production while playing in Mississippi - weighed equally to results in major league baseball. The players selected were compiled by current and former M-Braves staff, broadcasters, and the fans.

We begin with what was the most challenging category to trim to a five-man rotation. Arguably, the Braves have produced the best starting pitchers in baseball for the last three decades. During the decade, no M-Braves pitching staff finished worse than fifth in the Southen League in pitching - ending the year second, four times, and first, twice. These five pitchers have combined for three Futures Game selections, three Baseball America Double-A All-Star selections, three MLB All-Star Selections, and 160 MLB wins.

Ian Anderson - The top pitching prospect for the Atlanta Braves went 7-5 with a 2.68 ERA, 147 strikeouts, 47 walks in 111.0 innings during the 2019 season. Anderson started the past July's Futures Game in Cleveland, was named a Southen League Midseason All-Star and a Baseball America Double-A All-Star and Braves Minor League Pitcher of the Year. Anderson, who turned 21 in May, limited opponents to a .202 average, the second-lowest mark in the Southern League, while leading the league in strikeouts through Aug. 4. He made the third-most starts in the league, logged the eighth-most innings, and the sixth-best WHIP (1.16). Anderson capped his season combining with Jeremy Walker for a combined no-hitter on June 28, matching Tommy Hanson's club record with 14 strikeouts in a single game.

Mike Minor - The two-time M-Braves Opening Day starter (2010 and 2014) was a no brainer for this spot, more so because of what he has done since leaving Double-A. Ironically, despite just 15 M-Braves starts, Minor is the only player to make two Opening Day starts for the club. The seventh overall pick in the 2009 draft out of Vanderbilt went 2-6 with a 4.03 ERA in 87.0 innings over 15 starts for the M-Braves, logging 109 strikeouts to just 34 walks over that period. Minor represented the Braves in the 2010 Futures Game.

Minor is coming off an All-Star season in 2019 for the Rangers, joining Lance Lynn on their pitching staff with 200 innings and 200 strikeouts. It's the first Rangers duo to do so since 1990 when Nolan Ryan and Bobby Witt both accomplished the feat. Minor threw 126 pitches in his final start, the most since Yu Darvish threw the same more than five years ago. Since making his major league debut in 2010, Minor has posted a 70-60 record and 3.90 ERA and six saves over 1,095.2 innings for Kansas City, Texas, and Atlanta in 236 games and 170 stars. He has posted 986 strikeouts and 315 walks.

Sean Newcomb - The big left-hander pitched one season for the M-Braves and set the single-season strikeout record with 152 punch outs during the 2016 campaign. He led the league in strikeouts and topped the club in virtually every pitching category. Newcomb made 27 starts and went 8-7 with a 3.86 ERA, 152 strikeouts, 71 walks over 140.0 innings.

Mike Soroka - Like Newcomb, Soroka made the most of his one season in the Southern League. The right-hander is currently fourth in M-Braves history with a 2.75 ERA, which was second-best during the 2017 campaign. Over 26 starts, he was 11-8 with 125 strikeouts, 34 walks over153.2 innings pitched, Soroka represented the Braves in the Futures Game and was a Baseball America Double-A All-Star. Soroka posted the longest scoreless streak in club history at 27.1 innings from June 5 to June 15.

In Soroka's first two MLB seasons, he is 15-5 with a 2.79 ERA, 163 strikeouts, 48 walks over 200.1 innings in 34 starts. After a shoulder injury limited his 2018 season, Soroka was named to the Baseball America All-Rookie Team in 2019, was an NL All-Star, and finished third in the NL in ERA at 2.68. His 13 wins were good enough for 10th in the NL. Soroka's 2.68 ERA led all rookies and ranked fifth in the major leagues, and he did it while holding up over 174.2 innings, tied for third-most among rookies. He proved especially adept at keeping the ball in the park. His home run rate of 0.72 per nine innings was second-lowest in the majors.

Alex Wood - The final starting spot goes to Wood, who only made ten starts for the M-Braves during the 2013 season, but made the most of the opportunities. Wood was 4-2 with a 1.26 ERA, 57 strikeouts, 15 walks over 57.0 innings. Wood was a Southern League Pitcher of the Week and was promoted to Atlanta directly from Mississippi, becoming 13th player to do so in club history. He also worked 19.1 consecutive
innings without allowing a run (33.2 IP without giving up an earned run) during his M-Braves tenure.

On July 30, 2015, in a three-team trade, the Dodgers acquired Wood, Mat Latos, Michael Morse, Bronson Arroyo, Jim Johnson, Luis Avilán, and José Peraza, while the Marlins acquired minor league pitchers Victor Araujo, Jeff Brigham, and Kevin Guzman, and the Braves received Héctor Olivera, Paco Rodriguez, minor league pitcher Zachary Bird and a competitive balance draft pick for the 2016 draft. What a trade. His 2017 season began in the bullpen and moved to the rotation after an injury to Rich Hill. He won the National League Player of the Week Award for the week of May 8-14 after he pitched 11 scoreless innings with 21 strikeouts over two starts that week. A few weeks later, he was also awarded the NL Pitcher of the Month Award after he went 5-0 with a 1.27 ERA and 41 strikeouts in May. Wood eventually had his scoreless innings streak snapped at 28 on June 10. On July 5, Wood became the first Dodgers starting pitcher to begin the season 10-0 since Don Newcombe in 1955.