TinCaps starter Brett Kennedy (W, 2-1) went a career-long six innings and struck out a career-high 10 batters. The only earned run he allowed came in the first inning when Cougars first baseman Trevor Mitsui hit a two-out solo home run. That was the last highlight for Mitsui, however.

Kane County (16-12) equalized with an unearned run in the home fourth. But again, the TinCaps had a quick answer with a pair of runs in the fifth to go in front, 4-2.

That pattern continued when the Cougars pulled to within a run, 4-3, in the seventh and the TinCaps got the run back in the eighth to lead by a pair once more, 5-3.

Kane County rallied with a run in the ninth and had the tying run at third and winning run at first with two outs when Mitsui grounded out to Gerardo Reyes (S, 1). Mitsui also struck out once and grounded into two double plays after his homer.

TinCaps second baseman Peter Van Gansen and left fielder Rod Boykin both had three-hit games. Van Gansen executed a suicide squeeze in the fifth that scored right fielder Mason Smith from third and broke the 2-2 tie. Smith reached base three times, including in the second when he tied the game, 1-1, with a single to left field off Joel Payamps (L, 0-3). Third baseman Kodie Tidwell put Fort Wayne in front, 2-1, with a groundout to second.

In the fifth, catcher Austin Allen added an RBI-infield single that made it 4-2. Smith's second RBI of the night came on a fielder's choice groundout in the seventh.

Reliever Trey Wingenter made his TinCaps debut as he worked the seventh and eighth innings. The 6-foot-7 righty struck out five. The run he allowed came on a passed ball. Reyes got two batters looking in the ninth.

The Fort Wayne victory forces a rubber match on Saturday. Kane County won the series opener, 6-2. The TinCaps are now 3-2 on their six-game road trip. 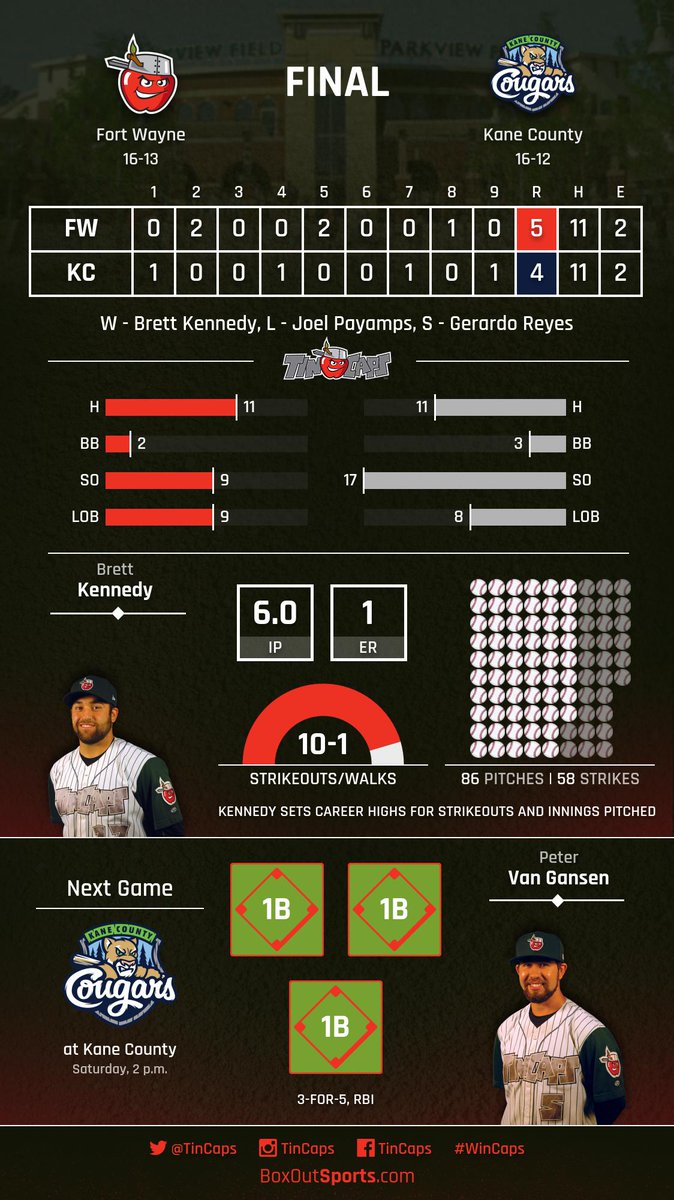