Austin Hedges was ready to pursue his dream of a major league baseball career as soon as possible.

The catcher from Junipero Serra Catholic HS (San Juan Capistrano, CA) had already signed with UCLA and was planning to use college baseball to fine-tune his skills. When the pro opportunity came Hedges would be ready to go.

Before Hedges became a Bruin, the San Diego Padres changed his plans by selecting him in the second round of the 2011 Major League June Amateur Draft.

Being thrust into rookie ball a few weeks after high school was a major challenge, but Hedges passed the test with flying colors.

The good grades keep coming. During the past four years, the Missions catcher is not only the Padres' top prospect at his position, but he's considered by many experts as the best in minor league baseball.

"Going to rookie ball was different, but I was ready for it," Hedges said. "I don't think I would have signed if I wasn't ready maturity-wise. My parents raised me the right way and helped me to prepare for taking such a huge step. They always helped to do whatever I needed to succeed in life.

"It was awesome getting drafted. I had dreamed of being a big league baseball player all my life and that was bringing me closer. It couldn't have turned out better."

Being thought of so highly is appreciated by Hedges, but he takes the accolades with a grain of salt. After all, it's still minor league baseball. The only way he'll consider his career successful is by being called up to the majors.

Looking at the way the Padres feel about the 6-foot-1, 190-pounder, Hedges is on his way. "Austin is strong on the defensive side," Missions' manager Rich Dauer said. "He has a strong arm and stays in tuned with the game. He remembers the hitters. He's someone you can trust back there. He's improving his hitting. He's making movement forward."

Hedges has succeeded at each level. The biggest adjustment came last August when making the jump from Single-A Lake Elsinore to Double-A San Antonio.

Once Hedges, started feeling comfortable, things started to fall into place. He contributed with the bat and showed confidence behind the plate while working with the pitchers.

Hedges was at his best while starting eight of the Missions' 10 playoff games. He batted .241 with three RBIs and kept things secure behind the plate. Not only did Hedges gain valuable experience, but he was part of a Texas League championship.

That made the time with Missions more gratifying.

"That was awesome," Hedges said. "Coming here in August was different. But we had a great group of guys. They accepted me and I established a good relationship with the pitching staff. Being able to do that helped me.

"We kept rolling and won a championship. Getting those games under my belt made me more comfortable coming into this year."

Now that he has a better idea of Double-A baseball, Hedges expects to do more this season. He's currently sporting a .242 batting average with ten RBIs, which isn't his idea of success. However, he expects that to change as the season grows.

Defensively, Hedges is looking sharp as ever. He has the strong arm to erase runners trying to steal. He's familiar with all the hitters the Missions face by keeping a journal on whoever comes to the plate. No doubt that comes in handy when calling pitches, but his biggest asset is making sure the Missions' pitchers feel comfortable.

He knows which pitches they feel confident throwing in certain situations. He also knows how to light a spark when needed or how to keep things calm when the pressure rises.

That's the approach Hedges has taken since the beginning and he plans to keep it that while climbing up the ladder.

"I've tried to become more consistent in every aspect of my game each year," Hedges said. "I want to do all the little things the right way."

From his experience, building the pitcher-catcher relationship is most important. 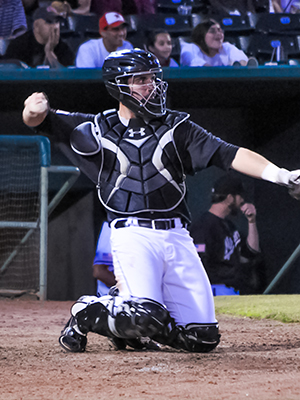 Looking at the quality staff, it's easy to see why the catcher loves his work. Although the bats have struggled in the first month of the season the pitching has been on the mark for the most part. Having starters like Matt Wisler, Jesse Hahn, Josh Geer, Justin Hancock and James Needy as battery mates excites Hedges.

"Being able to catch all these guys with outstanding arms makes my job easier," Hedges said. "I try to make them comfortable. You have to establish that relationship on and off the field. Each pitcher is different. Some guys need to be pumped up. Some need to be calmed down. It's all about knowing their personalities in the situation of the game.

"You want to get that trust level. The more we trust each other, the more success we'll have. I've caught a handful of these guys a few years now. It's good to grow with them as ballplayers and men off the field."

At the same time, the Missions' pitchers have confidence in Hedges. They know he is going to make their time on the mound comfortable.

"Austin is young, but he knows the game really well," Geer said. "He reads hitters well and knows their swings. He knows the pitchers. That's always important. You want to be on the same page with your catcher. We have that with Austin."