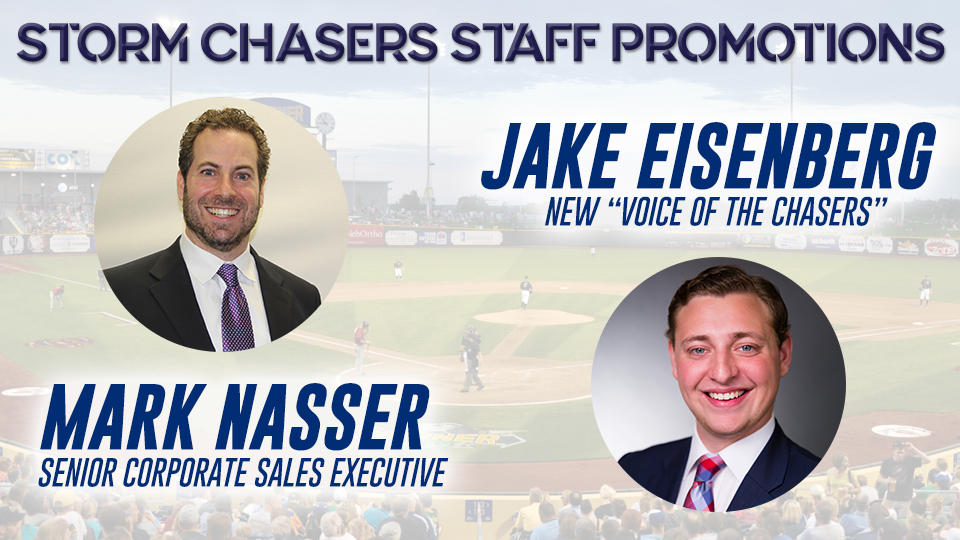 "I'm thankful to the organization for allowing me to make this transition," said Nasser. "I want to express my sincere gratitude to anyone who listened to a single pitch. It's been a tremendous privilege being your connection to the game. To be a part of this sport, experience so many fun and memorable moments, all because I was doing something I love, I feel incredibly lucky."

"We applaud and greatly appreciate all of Nasser's efforts over the past 19 seasons as the voice of the Omaha Royals, Golden Spikes and Storm Chasers," said Chasers General Manager Laurie Schlender. "We are also very excited about the variety of new aspects and insights that (Eisenberg) will bring to the broadcast for the 2020 season."

2019 marked Nasser's 19th season with the Omaha organization, as well as his 26th in professional baseball. Baseball America named Mark one of the Top Ten broadcasters in all of Minor League Baseball, and he has also called select games for the Kansas City Royals.

During his tenure Nasser, has been the voice of some of the organization's most memorable moments in its history, including four division crowns, three Pacific Coast League titles, and Back-to-Back Triple-A National Championships in 2013 and 2014. He also was a member of the broadcast team for the 2015 First National Bank Triple-A All-Star Game at Werner Park, as well as the Royals Exhibition Game presented by Cobalt Credit Union in 2019. In his 19 years with the club, Nasser has called over 2,700 Omaha Golden Spikes, Royals and Storm Chasers contests.

Eisenberg joins the Chasers after serving as the Broadcast and Communications Assistant with the Richmond Flying Squirrels where he hosted their Pre- and Post-game shows and shared duties as play-by-play announcer for all Flying Squirrels home games and select road games. Eisenberg has three years of minor league baseball experience, working for the Brooklyn Cyclones and Winston-Salem Dash before his stop in Richmond.

"I'm thrilled to join the Storm Chasers and tremendously grateful to Gary Green, Martie Cordaro, Laurie Schlender, and the rest of the organization for the opportunity to chronicle the next chapter of Omaha's rich Minor League Baseball tradition," said Eisenberg. "I'm especially excited to get to know the community and share the stories of the Chasers with the fans at Werner Park and beyond."

In addition to his Minor League Baseball experience, Eisenberg works as a studio host for Learfield IMG College and as a freelance play-by-play broadcaster for the Atlantic 10 Conference, Davidson College, and Wake Forest University.

All 2020 Storm Chasers games can be heard on 1180 Zone 2 for the 12th consecutive season, which they will kick off on the road on April 9 against the Memphis Redbirds.