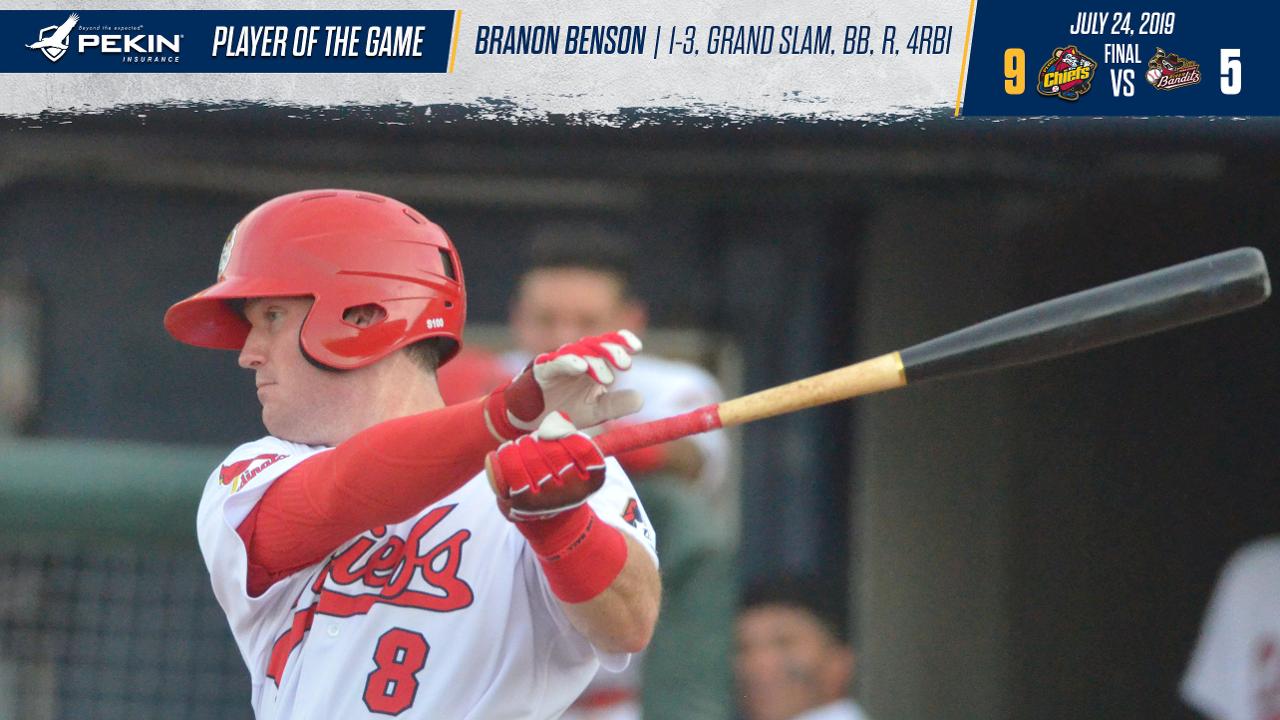 Davenport, IA - The Peoria Chiefs scored seven runs in the seventh inning, highlighted by a Brandon Benson grand slam to beat the Quad Cities River Bandits 9-5 Wednesday night. In addition to the go-ahead slam, Benson drew a walk and was named the Pekin Insurance Beyond the Expected Player of the Game.

Down 2-0 after six innings the Chiefs offense got into gear against reliever Matt Ruppenthal in the seventh. Brady Whalen and Ivan Herrera started the inning with consecutive singles and both moved up 90 feet on a wild pitch. Brandon Riley got the Chiefs on the board with a RBI single to left and Leandro Cedeno walked to load the bases. Newcomer Imeldo Diaz singled to plate Herrera and tie the game 2-2. Benson gave the Chiefs the lead for good with a grand slam into the left-field berm for a 6-2 advantage. Quad Cities went to the bullpen and Luis de Paula loaded the bases as Delvin Perez was hit by a pitch, Whalen singled again and Herrera walked. With Riley batting, Herrera got caught in a run-down long enough for Perez to score from third for a 7-2 Chiefs lead.

An unearned run for Quad Cities got them to within four before the Chiefs scored again in the eighth. Riley led off with a walk and stole second with one out. Diaz and Benson both walked to load the bases and Riley scored on a wild pitch for an 8-3 Chiefs lead. Diaz came home on a groundout from Edwin Figuera to put the Chiefs up 9-3.

Colin Schmid allowed one earned run on four hits over five innings as he walked two and struck out four in the no-decision. Tony Locey earned the win with one unearned run allowed over two innings and he struck out five. Freddy Pacheco got a strikeout with the bases loaded in the eighth and threw a shutout ninth to earn his first save of the season.

Whalen had two hits in the seventh, the first time a Chiefs player had two hits in an inning since Alexis Wilson did May 20 at Wisconsin. Benson has four homers on the season, two against Quad Cities. The Chiefs have five grand slams this season, tied for the 2009 team for the most since the 2004 squad hit a team-record nine slams. Locey earned his first professional win and he now has 18 strikeouts in eight innings of work. Pacheco's last save came in August of 2018 for the GCL Cardinals. He has 73 strikeouts in 40 2/3 innings and leads the MWL with a 16.2 K/9. The Chiefs are 5-6 against Quad Cities this season, the second most wins they hae against any team (Wisconsin, 6). Perez stole his team-leading 15th base and Riley stole his 10th. Whalen leads the Chiefs with 23-multi hit games and he is now 15-for-38 against QC this season, a .395 average.

The series continues at 6:35 p.m. Thursday in Davenport with RH Michael Brettell on the mound against QC RH Brett Daniels. The broadcast begins with the Pre-Game Show at 6:20 p.m. on the Peoria Chiefs Tune-In Page, which is free and also has a free app for smartphones and tablets. The game is also available on MiLB.TV for subscribers.