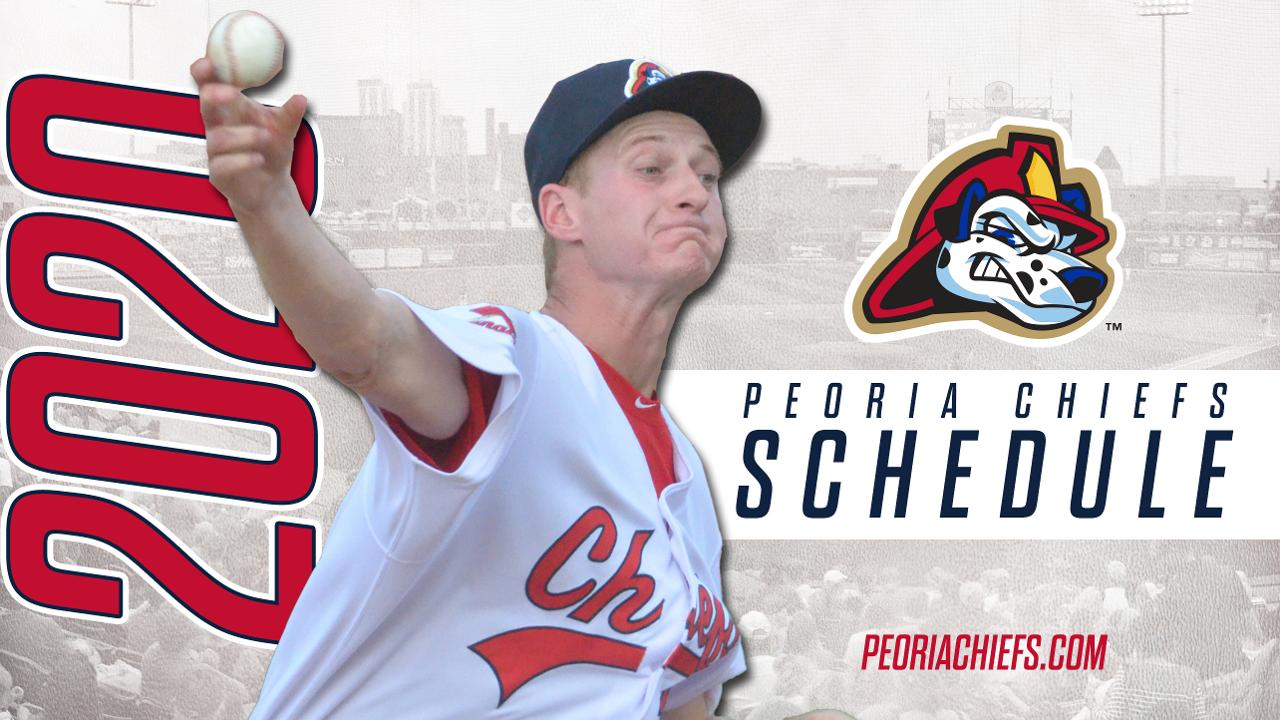 PEORIA, IL - The Peoria Chiefs have announced their 2020 Midwest League schedule with the first pitch of their 38th season coming on the road in Davenport, Iowa Thursday, April 9 with the home opener set for Monday, April 13 against the Beloit Snappers. Game times and promotions will be announced during the off-season and the first 2500 fans through the gates on Fan Appreciation Night (August 30, 2019) will get a 2020 Magnet Schedule.

The Chiefs open the 2020 season April 9-11 with three games in Quad Cities against the River Bandits marking their fifth straight season opener in the state of Iowa. The first homestand includes three games against Beloit and a four-game series against the Kane County Cougars. The Chiefs are home for 10 games in April, 15 in May, 12 in June, 13 in July, 13 in August and seven in September. The final regular season home game is on Labor Day, September 7, marking the first time the Chiefs have finished a regular season at home since 2011. The longest homestand of the season is seven games, which happens multiple times. The longest road trip is also seven games. The Chiefs end the first half at home on Father's Day, June 21 against Clinton and also open the second half in Cedar Rapids, Iowa on Thursday, June 25.

After a one-year absence, the Chiefs are scheduled to be at Dozer Park on the Fourth of July with a Saturday night game scheduled against Wisconsin. The Midwest League will not hold games on Easter Sunday (April 12) or Mother's Day (Sunday, May 10) and the Chiefs are on the road for Memorial Day (at Cedar Rapids). The 2020 Midwest League All-Star game is in Bowling Green, Kentucky on Tuesday, June 23.

The Chiefs play Beloit 20 times, the most of any opponent with 13 of those games in Peoria. The Chiefs also host Kane County 13 times in 2020, followed by seven home games each against Burlington, Quad Cities and Clinton. The Chiefs go to Clinton and Burlington three times each for a total of 10 games in each spot. They also play nine games each in Wisconsin and Quad Cities. The Chiefs face Kane County 19 times, Burlington and Clinton 17 each, Quad Cities 16 and Wisconsin 14 times. The least the Chiefs will play a team next season is 13 games against Cedar Rapids.

The Midwest League schedule again features just three games against each of the eight Eastern Division squads. The two-week inter-divisional games are scheduled for April 28 - May 9 and July 15-26. The Chiefs change opponents in 2020 and will host West Michigan (Tigers) and South Bend (Cubs) April 28 - May 3. The games against South Bend will be Friday, Saturday and Sunday May 1-3. The Chiefs then travel to Bowling Green (Rays) May 4-6 and Dayton (Reds) May 7-9. The second half the Chiefs are on the road in Michigan against Lansing (Blue Jays) July 15-17 and Great Lakes (Dodgers) July 18-20. The Chiefs host Lake County (Indians) July 21-23 and Fort Wayne (Padres) July 24-26.

Promotions, game times and more information on the 2020 season will be announced this fall and winter. New season tickets are on sale by calling 309-680-4000 while current season ticket holders can renew their ticket plans with their account representative. Group tickets will also go on sale this fall while individual game sales will go on sale as the season approaches.