Chiefs Avoid Sweep With Run in 9th for 5-4 Win 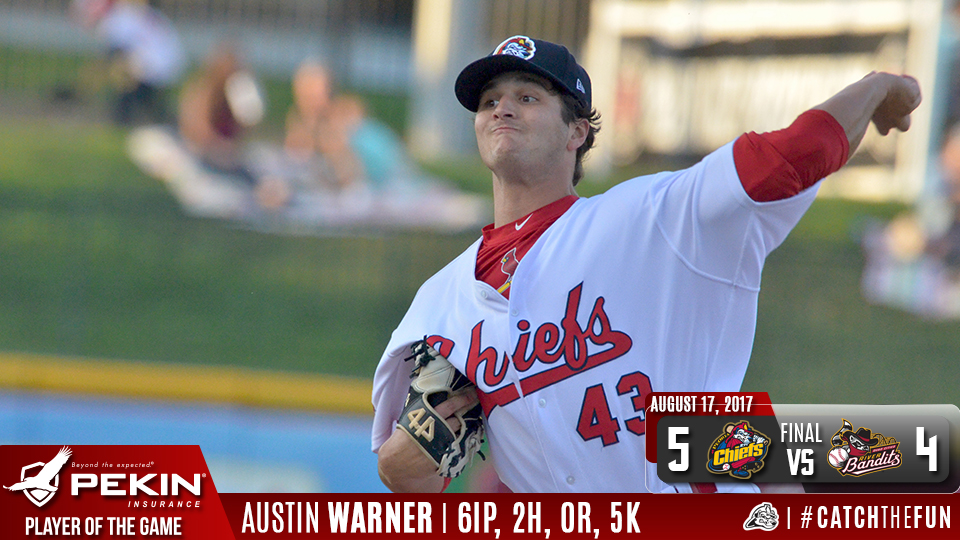 Davenport, IA - The Peoria Chiefs lost a three-run lead in the eighth inning but bounced back for a run in the top of the ninth in a 5-4 win over the Quad Cities River Bandits. The win moves the Chiefs to 28-25 in the second half with a half game Wild Card lead over the Beloit Snappers with 17 games left.

For the second night in a row the Chiefs took the lead in the second inning, this time against Bandits starter Ronel Blanco. Dylan Carlson singled with two outs and came around to score as Brian O'Keefe doubled to right-center for a 1-0 advantage.

Austin Warner kept the River Bandits bats quiet and the Chiefs doubled the lead an inning later. Stefan Trosclair launched a 407-foot home run to center field, his 11th of the season, for a 2-0 lead.

The bottom of the order came through again in the fourth as the Chiefs added on. Carlson walked with two outs and again scored on a double by O'Keefe for a 3-0 lead.

Warner allowed just two hits over six shutout innings though the Chiefs lost O'Keefe in the fifth inning to a foul ball off the mask. Bryan Dobzanski took over on the mound for the Chiefs in the seventh and Quad Cities scored a run to cut the Chiefs lead to 3-1.

Peoria got that run back in the top of the eighth against Lucas Williams. Trosclair doubled off the wall in left-center and moved to third on a deep fly out by Ryan McCarvel. Danny Hudzina was intentionally walked and the Chiefs took a 4-1 lead as Matthew Fiedler delivered a sacrifice fly to right.

The Chiefs lead didn't make it through the eighth with Yeison Medina on the mound. An error by Kramer Robertson started the inning and Chuckie Robinson doubled to left for a 4-2 Chiefs lead. Abraham Toro-Hernandez delivered a double to right to cut the Chiefs lead to 4-3 and Ronnie Dawson singled to left to tie the game with one out. Medina struck out the next two batters to send the game to the ninth, tied 4-4.

With one out in the top of the ninth, new Bandits reliever Devon Carr hit Mick Fennell with a pitch. Fennell's errant pickoff throw to first base sent Fennell to third and Robertson was hit by a pitch. Robertson stole second as Trosclair struck out and the Bandits intentionally walked McCarvel to load the bases. Danny Hudzina drew a RBI walk on a 3-1 pitch to force home Fennell and give the Chiefs a 5-4 lead. Austin Sexton retired the Bandts in order in the ninth to finish off the win.

Warner took a no-decision as he allowed just two hits over six shutout innings while walking two and striking out five. Dobzanski allowed one run on three hits over 2/3 of an inning while walking one and striking out one. Medina (5-0) suffered a blown save, but got the win as he allowed three runs, two earned, on three hits over 1 1/3 innings as he struck out three. Sexton retired all three batters he faced for his first professional save.

Notes…Trosclair is the first Chiefs player this season to 100 hits and the multi-hit game gives him 101…Warner has not allowed a run in 19 2/3 innings over his last three starts…His last two starts have included 13 shutout innings but no win as the Chiefs blew 1-0 and 3-0 leads...The home run by Trosclair was the 109th of the season for the Chiefs, tied with the 2004 team for fourth most in team history…With two doubles, his 51st and 52nd career doubles, O'Keefe moved into a tie for fifth on the franchise list and he moved into sixth on the hits list with 252…The last time O'Keefe started a game batting 8th was his first game with the Chiefs on July 19, 2015…Peoria is 21-16 in the final game of a series, 11-8 on the road…The Chiefs have more wins on Thursday (11) than any other day…The Chiefs have only been swept once this season, May 11-13 at home against South Bend…The last time the Chiefs were swept in a four-game series was August 24-27, 2013 in Cedar Rapids…The Chiefs are 5-9 against Quad Cities, 3-8 in Iowa an the teams will play in Peoria August 30 - September 1…The Chiefs return home for a four-game series against Clinton starting at 7:00 p.m. Friday…The Chiefs will send RH Anthony Shew (1-0, 4.26) to the mound against Clinton RH Steven Ridings (0-2, 4.84)…There will be a post-game Fireworks show…Friday is Super Villain Night with appearances by The Joker and Harley Quinn…The broadcast can be heard, starting with the pregame show at 6:45 p.m. on www.peoriachiefs.com/listenlive which also has downloads for a free app on the iPhone, iPad, Blackberry, and Android… The broadcast is also available on the Peoria Chiefs Radio Network in the Tune-In Radio App.