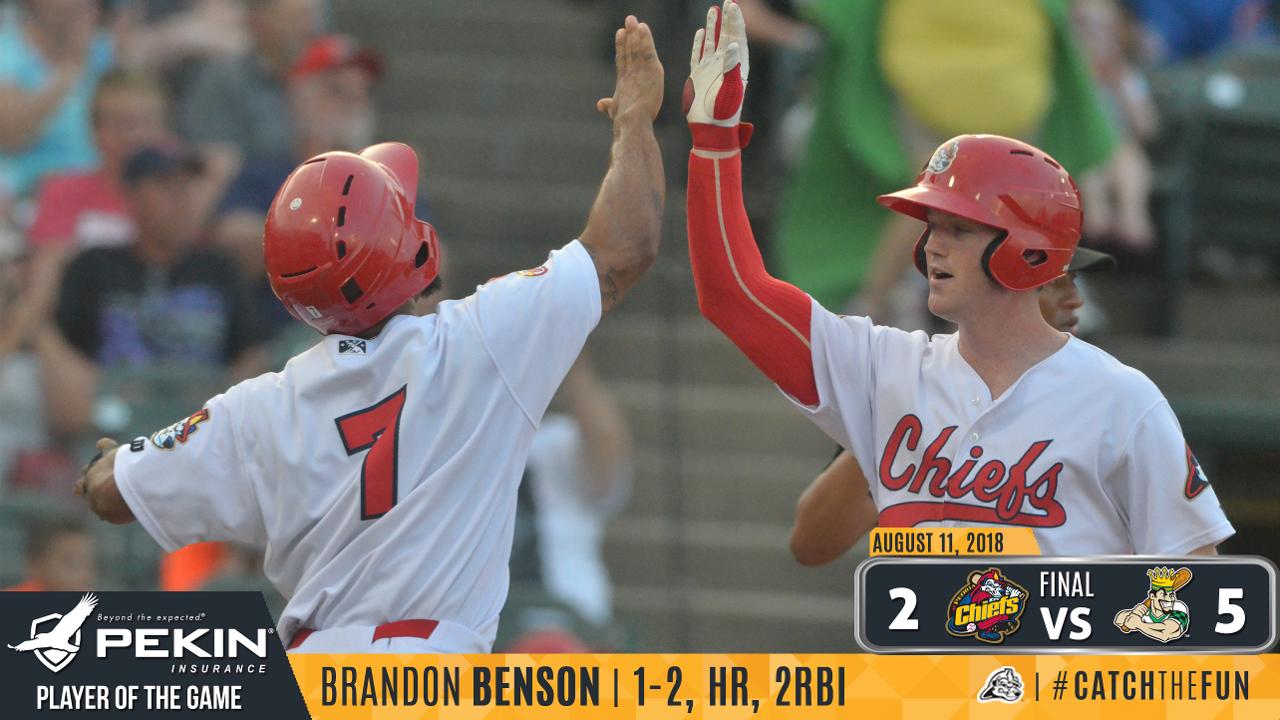 The Peoria Chiefs fell into an early hole and lost to the Clinton LumberKings 5-2 in the opener of a four-game series on Saturday night. The Chiefs fell to 28-18 in the second half and 67-49 on the season as the series continues 2:00 p.m. on Sunday.

The LumberKings jumped out to an early lead in the top of the first on Chiefs starter Alvaro Seijas. Billy Cooke was hit by a pitch to lead off the game and advanced to second on a wild pitch. Connor Hoover drove in Cooke on a single to right for a 1-0 lead. McGovern walked to put two runners on as Eugene Helder plated Hoover on a two-out double to right. Dimas Ojeda hit a comebacker to Seijas who threw the ball away at third on a fielder's choice plus an error to score McGovern for a 3-0 advantage.

The long ball widened the margin for Clinton in the top of the fourth. McGovern led off the inning with a solo homer over the right field wall. Ojeda doubled to the gap in right center with one out and Johnny Adams reached on a fielding error. With two down, Adams stole second and Ojeda stole home as part of a delayed double steal for an unearned run that pushed the LumberKings lead to 5-0.

Peoria answered in the bottom of the third against Clinton starter Clay Chandler. JR Davis punched a single to right center and Brandon Benson lifted his second home run of the season over the wall in left to cut the deficit to get on the board behind 5-2.

Notes… Gorman made his Dozer Park debut and recorded his first hit in Peoria this season on a single to left in bottom of the fifth…He has hit safely in two straight...Kirtley had his nine-game hit streak snap…Benson has a seven-game hit streak...Davis has three multi-hit games in his last four starts…The Chiefs are 13-7 in the first game of a series at home...Peoria has been outscored 87-49 in the first inning this season...Peoria is 7-5 against the LumberKings this season…The series continues on Sunday at 2:00 p.m. against Clinton on Jurassic Park Day featuring a Velociraptor and other dinosaurs....PNC Family Sunday features $5 tickets for kids 12 and under…All fans can play catch on the field pre-game in the outfield, starting when gates open…Player autographs are post-game on the concourse and available to all fans…The first 1,000 fans through the gates receive a Luken Baker player poster…Seniors 55 and over can get $5 tickets on Senior Sunday…Sunday is also Bark in the Park as fans can bring their dogs to Dozer Park…The Chiefs probable starter is TBA against Clinton LH Ray Kerr (4-10, 4.40)…The broadcast can be heard, starting with the Pre-Game Show at 1:45 p.m. on www.peoriachiefs.com/listenlive and is also available on the Peoria Chiefs Network in the Tune-In Radio App…The game is also available to subscribers on MiLB.TV.