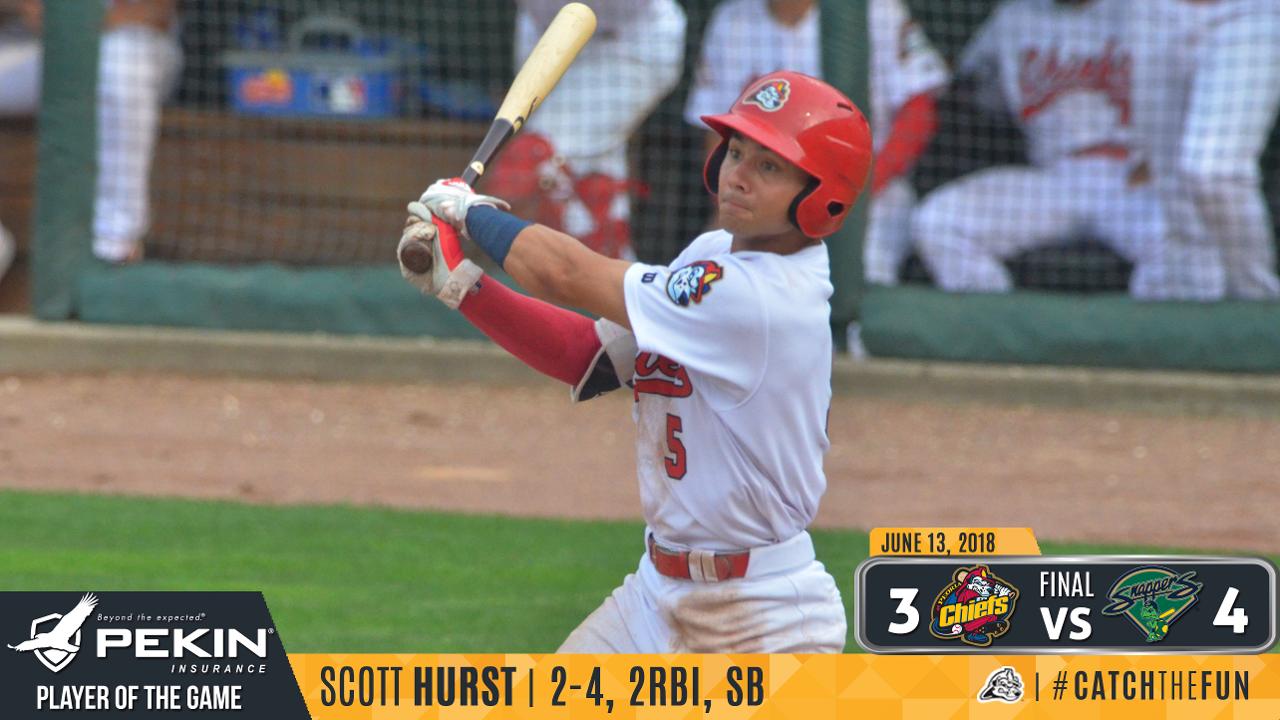 Peoria, IL - The Peoria Chiefs battled back to tie the game in the third but fell by a run to the Beloit Snappers 4-3 on Wednesday night in the second game of the series. The Chiefs are now 36-30 overall and tied with Quad Cities in the wildcard race with the series finale set for 7:00 p.m. on Thursday.

The Snappers started off the slugfest in the top of the first against Chiefs starter Johan Oviedo. Mickey McDonald led off the game with a single to left followed by a Trace Loehr single up the middle and an Austin Beck single to load the bases. Logan Farrar brought in McDonald for the first run of the game with a sacrifice fly to center. Jesus Lopez singled home Loehr and Jack Meggs doubled to score Beck for a 3-0 lead.

Peoria answered in the bottom of the first against Snappers starter Bryce Conley. Nick Plummer drew a leadoff walk and Irving Lopez singled to put runners at the corners. Elehuris Montero delivered again in the first inning with a single to right to put the Chiefs on the board trailing 3-1. Dennis Ortega lined a one-out single over the shortstop's head to load the bases. Scott Hurst ripped a single to the left side of the infield that ricocheted off the base umpire Gabe Alfonzo into left field scoring Lopez as the gap narrowed to 3-2.

A leadoff walk came back to bite the Snappers in the bottom of the third. Montero walked and moved to second on a one-out wild pitch. Dennis Ortega's fly out to center advanced Montero to third as Conley exited the game. Reliever Josh Reagan entered and Hurst drove in Montero on a single to tie the game 3-3.

Beloit got some help from a Chiefs error to regain the lead in the top of the fifth. Loehr reached on a dropped third strike and Farrar singled with one out to put two runners on. With two outs, a Montero fielding error on a groundball from Meggs allowed Loehr to score an unearned run for a 4-3 advantage.

Notes… The Chiefs are 13-9 in one-run games…Montero has a six-game hit streak…He has a first inning RBI in the last three games and recorded his team-high 21st multi-hit game…Hurst has a six-game hit streak…He recorded his 13th multi-hit game and third multi-RBI game of the season…Gonzalez had his six-game hit streak snap…Saylor struck out a career high five batters…The Chiefs are tied for the wild card spot at 36-30 with Quad Cities and both teams are one game behind 37-29 Clinton with four games left in the first half…The Chiefs conclude the seven-game homestand and the series against Beloit on Thursday at 7:00 p.m. on Game of Thrones Night with post-game Fireworks…Thursday is a Baumgarten Distributing Beer & Brat Thirsty Thursday featuring $2 12 ounce domestic cans and soda, $3 16 ounce craft drafts and margaritas, and $3 brats…Students with a valid college ID can purchase $5 Lawn seats…Thursday is also a Taco Bell Live Mas Thursday as fans can show a Taco Bell receipt within the last seven days to receive a buy one, get one free ticket, limit four free tickets per transaction… The Chiefs will start RH Alex Fagalde (1-2, 2.76) against Beloit RH Wyatt Marks (3-5, 4.66)…The broadcast can be heard, starting with the Pre-Game Show at 6:45 p.m. on www.peoriachiefs.com/listenlive and is also available on the Peoria Chiefs Network on the Tune-In Radio App as well as MiLB.tv.