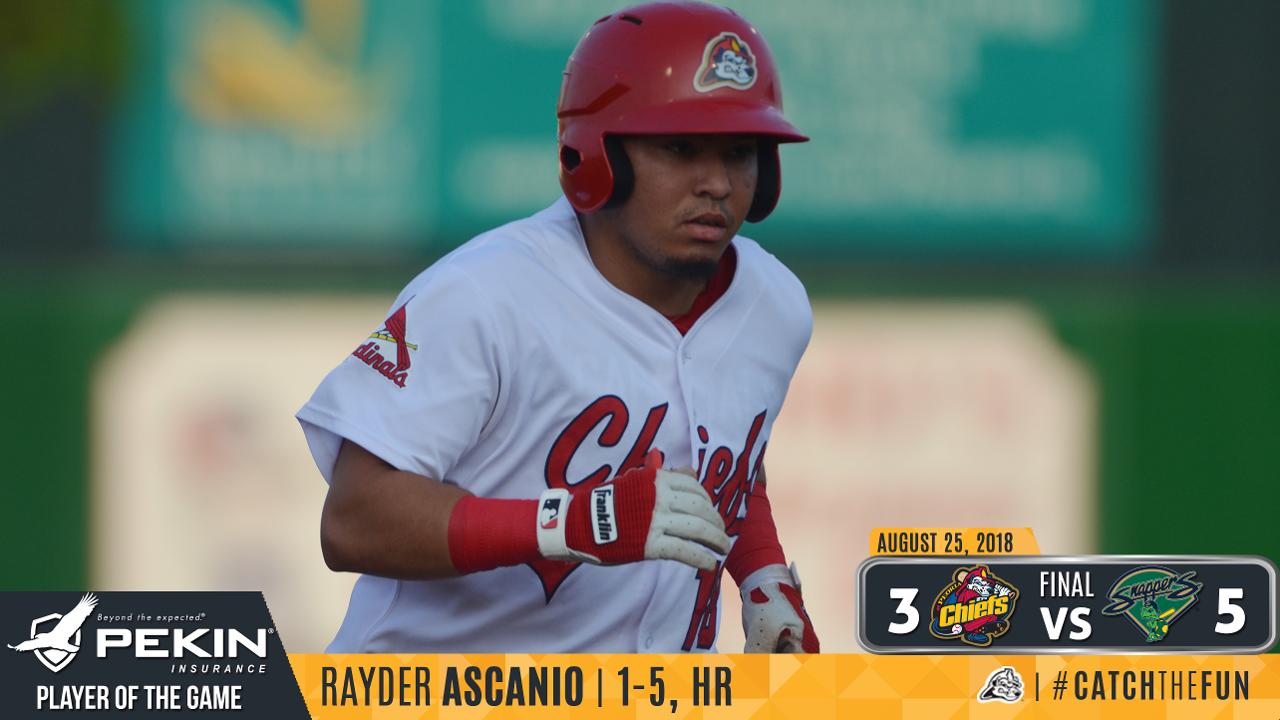 Peoria, IL - The Peoria Chiefs dropped the middle game of the series 5-3 to the Beloit Snappers on Saturday night. The Chiefs fell to 35-26 in the second half and 74-57 overall as the series continues at 2:00 p.m. on Sunday.

A leadoff homer helped the Chiefs jump out to an early lead in the bottom of the first inning against Snappers starter Jared Poche. Rayder Ascanio cranked a solo homer that stayed fair down the left field line for his third third long ball of the season and a 1-0 lead.

The Chiefs extended their lead in the bottom of the fourth with two outs. Zach Kirtley drew a leadoff walk and Wood Myers smacked a two-out double to right field to score Kirtley from first. Brandon Benson singled home Myers from second for a 3-0 advantage.

The Snappers moved ahead in the top of the sixth against reliever Thomas St. Clair. Logan Farrar was hit by a pitch and Jack Meggs singled with one out to put two runners on. Ryan Gridley drew a two-out walk to load the bases and St. Clair walked Jesus Lage as Farrar scored to tie the game 3-3. Patrick Dayton entered out of the bullpen with the bases loaded and walked Beck to allow Meggs to cross home plate as the Snappers snagged a 4-3 lead.

A Beloit insurance run came across in the top of the ninth. With one down, Lazaro Armenteros reached on a fielding error by Nolan Gorman. Gorman's second error of the inning and season high seventh error of the season with two outs as he threw the ball away from first after a single by Farrar and Armenteros scored from first to add to the margin 5-3.

Notes: Game time was 3:21...Blanco leads the team with 41 appearances...The Chiefs turned five consecutive inning ending double plays throughthe first five innings of the game...Five double plays turned is one shy of the season high six on June 14 also against Beloit...Peoria's pitching staff now has 1103 strikeouts this season which is fifth in franchise history...The series continues on Sunday at 2:00 p.m. against Beloit on Homer's Birthday Bash presented by City Link....The Chiefs blue throwback jersey will be auctioned off during the game on Sunday...Visit chiefs.gesture.com where you can bid on the jerseys and other items...PNC Family Sunday features $5 tickets for kids 12 and under…All fans can play catch on the field pre-game in the outfield, starting when gates open…Player autographs are post-game on the concourse and available to all fans…The first 1,000 fans through the gates ages receive a Peoria Chiefs team photo poster…Seniors 55 and over can get $5 tickets on Senior Sunday…Sunday is also Bark in the Park as fans can bring their dogs to Dozer Park…The Chiefs will start RH Zach Prendergast (6-3, 2.82) against Beloit RH Bryce Conley (3-6, 3.99)...The broadcast can be heard, starting with the Pre-Game Show at 1:45 p.m. on www.peoriachiefs.com/listenlive and is also available on the Peoria Chiefs Network in the Tune-In Radio App…The game is also available to subscribers on MiLB.TV...Tickets are available online at www.peoriachiefs.com or at the Dozer Park Box Office… Video of the game is available to subscribers on MiLB.TV…Chiefs Playoff tickets are also on sale with Dugout and Field Box Seats available for $9 as the Chiefs host Quad Cities in Game One Wednesday, September 5…The Chiefs announced their entire 2019 schedule last Friday and the entire schedule is available at www.peoriachiefs.com.