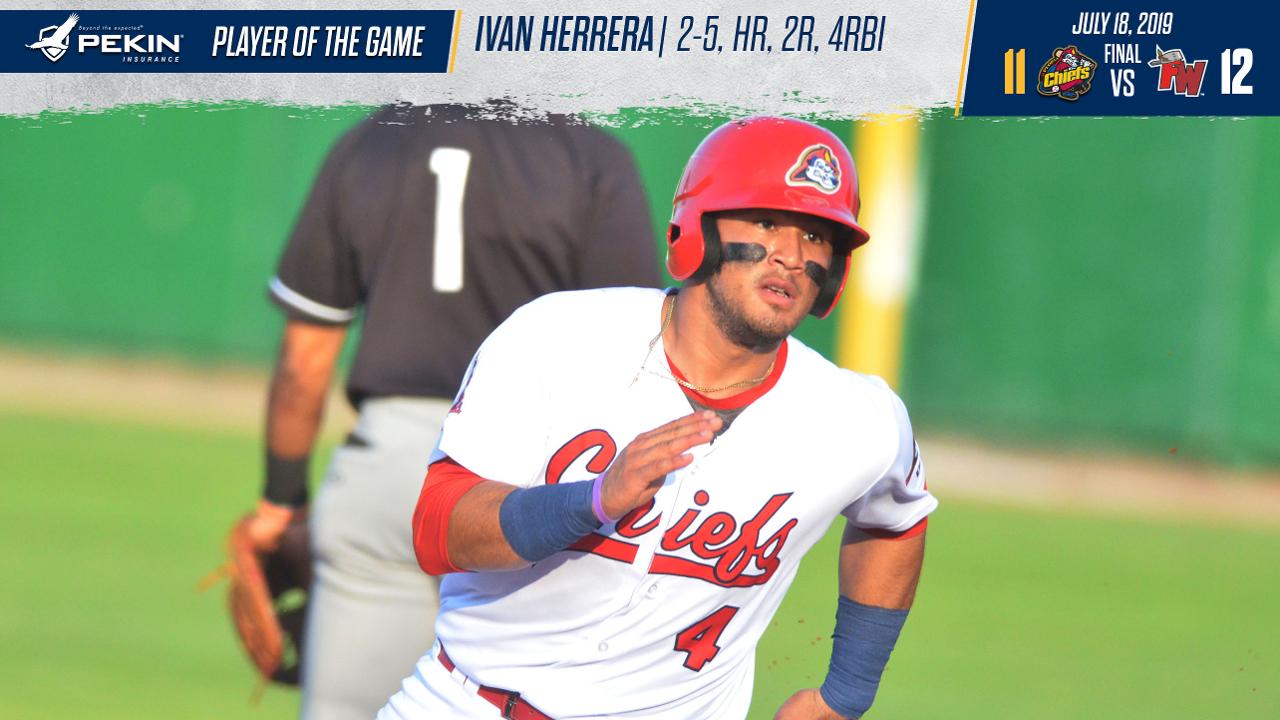 Fort Wayne, IN - The Peoria Chiefs got big nights at the plate from Brendan Donovan, Ivan Herrera and Brandon Benson as they scored 11 times, but ultimately fell to the Fort Wayne TinCaps 12-11 Thursday night. With two hits, a 3-run homer and four RBI, Herrera was named the Pekin Insurance Beyond the Expected Player of the game.

Peoria scored in the top of the first inning for the second straight game, this time knocking around Sam Keating. Donovan led off with a single and scored from second on a two-out single by Herrera for a 1-0 lead. Brandon Riley walked and Alexis Wilson put the Chiefs on top 2-0 with a single to left-center.

Peoria piled on in the second inning Benson led off with a single, Edwin Figuera was hit by a pitch and Benson scored on a single by Donovan for a 3-0 Chiefs lead. Delvin Perez knocked a single off the leg of Keating to bring home a fourth run and with two outs, Riley singled home Donovan for a 5-0 Chiefs lead.

Two innings later the Chiefs added on. Perez was hit by a pitch to start the frame and Whalen singled to put runners on the corners. Herrera unloaded on a 2-0 pitch for a 408-foot home run to left-center, his seventh of the season. The blast came off the bat at 105 MPH and put the Chiefs on top 8-0.

Fort Wayne changed pitchers in the fifth but the Chiefs offense kept swinging away. Benson doubled to start the inning against Austin Smith and scored on a single by Figuera. Donovan's third hit of the game was a triple off the wall in right-center to put the Chiefs on top 10-2. Whalen's team-leading seventh sac fly of the year extended his MWL-leading RBI tally to 57 as Donovan trotted home from third. Fort Wayne scored the final 10 runs from there to clinch the series.

Lefty Colin Schmid struck out a career-high eight batters over five innings and left with an 11-6 lead. Donovan extended his hit streak to nine games and he has scored 13 runs during that stretch. Both Donovan and Benson tied their season highs with three hits while Herrera tied his career high with four RBI.

The Chiefs will have RH Mike Brettell on the mound Friday against Ft. Wayne LH Omar Cruz with a 6:05 Central Time start. Friday's broadcast, beginning with the Pre-Game Show at 5:50 p.m. (CT) on the Peoria Chiefs Tune-In Page, which is free and also has a free app for smartphones and tablets. The game is also available on MiLB.tv to subscribers.

The Chiefs return home on Saturday, July 27 to start a seven-game homestand. Individual game tickets, group tickets and season ticket packages, including full-season, a 35-game ticket package, an 18-game ticket package or a Flex Plan are currently on sale by calling 309-680-4000. Individual game tickets are also on sale with the Dozer Park Box Office open Monday - Friday from 10:00 am - 5:00 pm and online at www.peoriachiefs.com which also lists all of the season's promotions. Game times and promotions are subject to change.