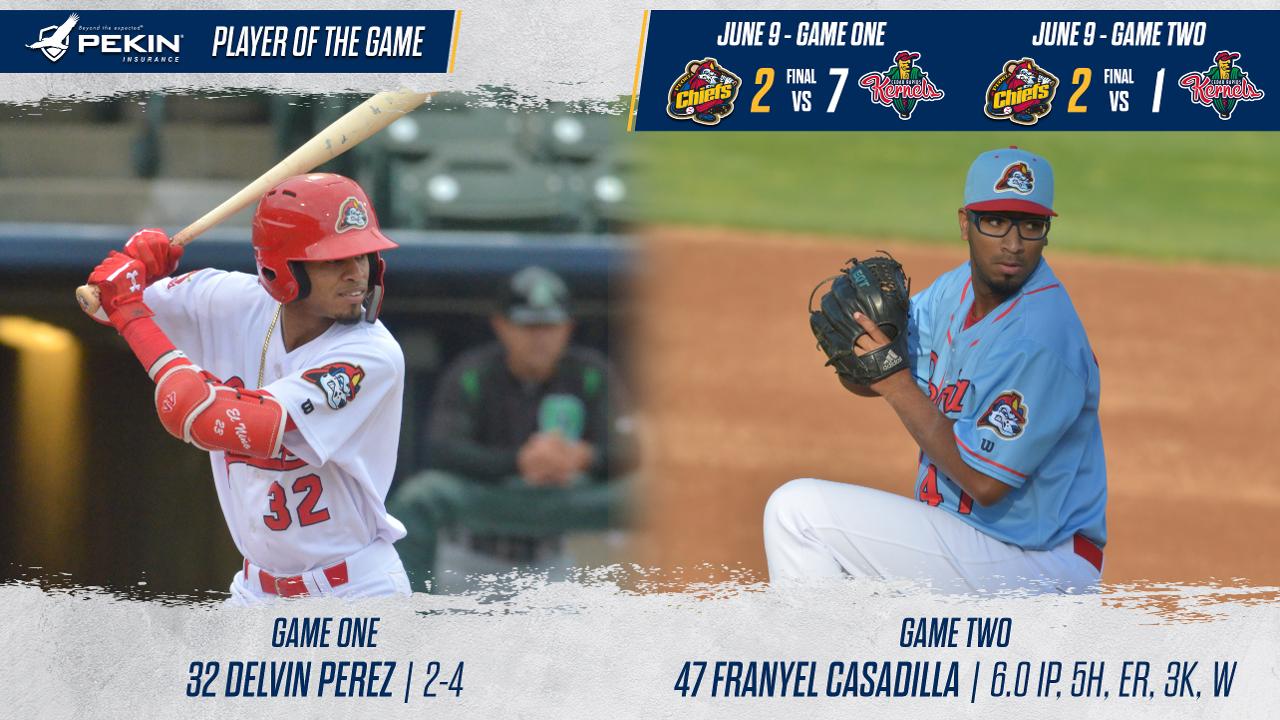 Peoria, IL - The Peoria Chiefs split their doubleheader with the Cedar Rapids Kernels Sunday afternoon falling 7-2 in game one and winning 2-1 in game two. The split moves the Chiefs to 27-34 on the season with the series finale set for Monday at 11:05 a.m.

The Kernels opened the scoring in game one against Chiefs starter Colin Schmid. With runners on first and second, Jacob Pearson hit a two-out bloop single to score the first run of the game.

The Chiefs tied the game in the bottom of the second against Kernels starter Andrew Cabezas. Alexis Wilson singled and Bryce Denton reached on a throwing error which put runners at the corners. During Josh Shaw's at-bat, Wilson scored on a wild pitch to tie the game at one.

Cedar Rapids regained the lead in the top of the fifth. The Kernels loaded the bases with one out and hit a sac fly off Chiefs reliever Freddy Pacheco to take a 2-1 lead. They plated four in the sixth and one in the seventh for the 7-1 lead.

The Chiefs got one back in the bottom of the seventh against Kernels reliever Moises Gomez. With one out, Brendan Donovan walked and advanced to second on a single from Delvin Perez. With two outs, Brady Whalen singled to center-field to score Donovan and cut the deficit to 7-2. The Kernels got the final out to secure the win.

In game two, the Chiefs struck first in the bottom of the fifth against Cedar Rapids starter Zach Neff. Ivan Herrera led off with a single and advanced to third on a double from Bryce Denton. Juan Yepez hit a sac fly to score Herrera and give the Chiefs a 1-0 lead.

The Kernels evened the score in the top of the sixth against Chiefs starter Franyel Casadilla. Ricky De La Torre hit a solo homerun to tie the game at one.

Peoria regained the lead in the bottom of the sixth against Kernels reliever Frandy Torres. Delvin Perez walked and stole second before Nolan Gorman was intentionally walked to put runners on first and second. Brady Whalen singled to center-field and Perez scored the go-ahead run for the 2-1 lead. The Kernels loaded the bases in the top of the seventh, but Cole Aker struck out Gabe Snyder to end the game and secure the Chiefs win.

Casadilla (2-1) earned the win pitching six innings allowing one run on five hits with three strikeouts. Aker pitched the final inning notching two strikeouts en route to his first save of the season.

The Chiefs conclude their series with the Cedar Rapids Kernels Monday at 11:05 a.m. Promotions can be found on the team website or social media accounts. Peoria will start RH Michael Brettell (2-2, 3.90) against Cedar Rapids RH Kai-Wei Teng (0-0, 4.91). The broadcast can be heard, starting with the Pre-Game Show at 10:50 a.m. on the Peoria Chiefs Tune-In Page, which is free and also has a free app for smartphones and tablets. The game is also available on MiLB.tv to subscribers.