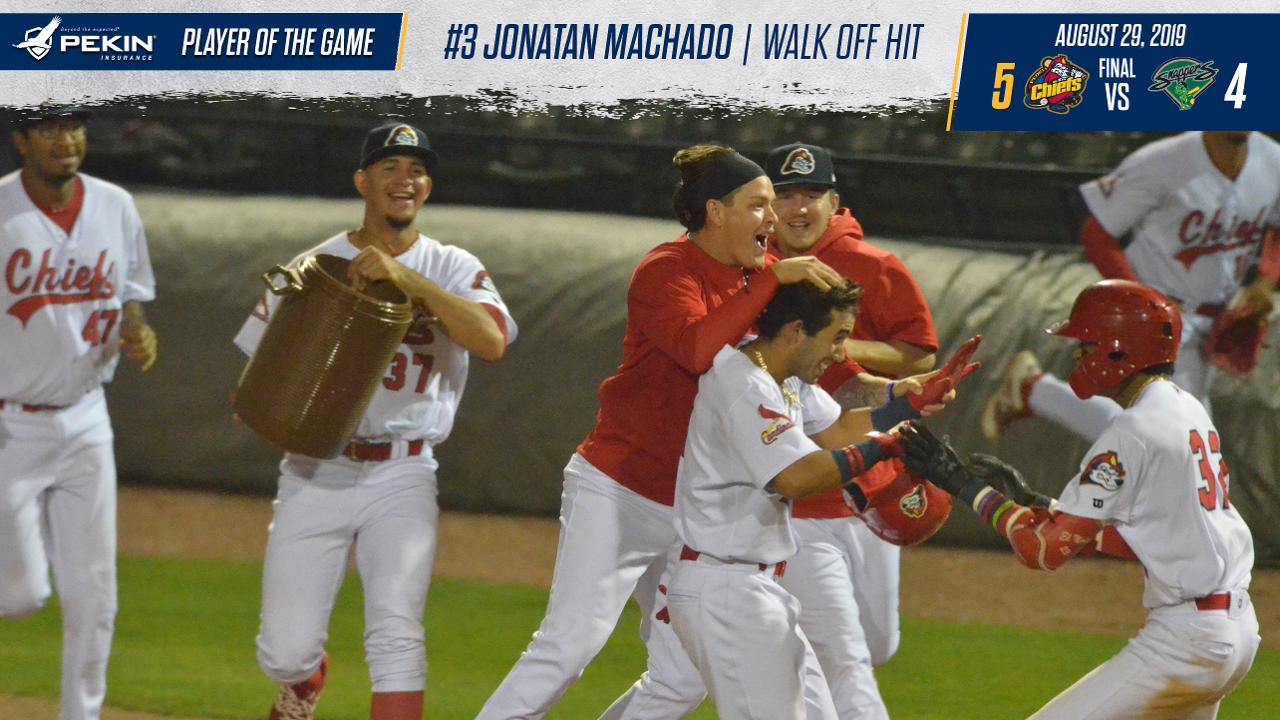 Peoria, IL - After entering the ninth trailing by one, the Peoria Chiefs rallied to get the 5-4 walk off win against the Beloit Snappers Thursday night at Dozer Park. Jonatan Machado went two-for-five with a double, RBI and a run scored earning the Pekin Insurance Beyond the Expected Player of the Game.

After three scoreless innings, the Chiefs drew first blood against Beloit starter Reid Birlingmair. With two outs, Brady Whalen drew a walk and scored from first on a double by Leandro Cedeno for the 1-0 lead.

Peoria added to their lead in the bottom of the sixth, knocking Birlingmair out of the game. With two outs, Whalen led off with a single and advanced to third on Cedeno's second double of the game. Brandon Riley followed with a single to score Whalen to put the Chiefs ahead 2-0.

The Chiefs entered the bottom of the eighth trailing but scratched across a run against Beloit reliever Charlie Cerny. Jonatan Machado led off with a double and advanced to third on an infield single by Delvin Perez. After Perez stole second, Machado scored on a sac fly by Whalen to cut the deficit to 4-3, but Perez was thrown out trying to advance to third to end the inning.

Peoria trailed by one entering the ninth, but got the walk off win. Cedeno was hit by a pitch to start the inning and advanced to third on a double by Riley. Alexis Wilson reached on a fielder's choice as Cedeno was thrown out at home trying to score. With runners at first and second, Riley scored on a single by Ynfante to tie the game but Wilson was thrown out trying to advance to third. Josh Shaw entered as a pinch runner for Ynfante and advanced to second on a single by Edwin Figuera. With runners on first and second, Machado singled to score Shaw to give the Chiefs the 5-4 walk off win.

Dalton Roach took the no decision pitching seven innings allowing three runs, two earned on five hits with two walks and four strikeouts. Connor Coward pitched two-thirds of an inning allowing one run on one hit with one walk and one strikeout. Evan Sisk (3-6) earned the win pitched a perfect 1 1/3 innings.

The Chiefs conclude their homestand with the Beloit Snappers Friday, August 30 at 6:35 p.m. The broadcast can be heard, starting with the Pre-Game Show at 6:20 p.m. on the Peoria Chiefs Tune-In Page, which is free and also has a free app for smartphones and tablets. The game is also available on MiLB.TV for subscribers.

Friday is also Fan Appreciation Night! Join us as we honor the fans all game long. Among the prizes fans can win on Friday are TV's, headphones, gaming systems, kitchen appliances, electronics, gift cards, and more! There will also be a Cardinals 2020 Ticket Voucher Giveaway for the first 1000 fans through the gates. The vouchers are good for two 2020 St. Louis Cardinals tickets (Some exemptions apply, see voucher for details).

The Chiefs will also be giving away a Chiefs 2020 Magnet Schedule, presented by CityLink, for the first 2500 fans through the gates. It is also the final fireworks night of the season presented by Central States Fireworks set to music by Stratus Networks and a pitch-in for charity benefitting St. Jude Rides. Make sure to join us at 6:05 p.m for the player awards, including team MVP and the Ryne Sandberg Award. Plus it's Happy Hour Friday with drink specials from gates open until first pitch. 16 oz Corona, 16 oz Miller Lite, 16 oz Summer Shandy and Cape Line are all $4 and it's Family Four Pack Friday: Get four tickets, four sodas and four hot dogs for just $70.