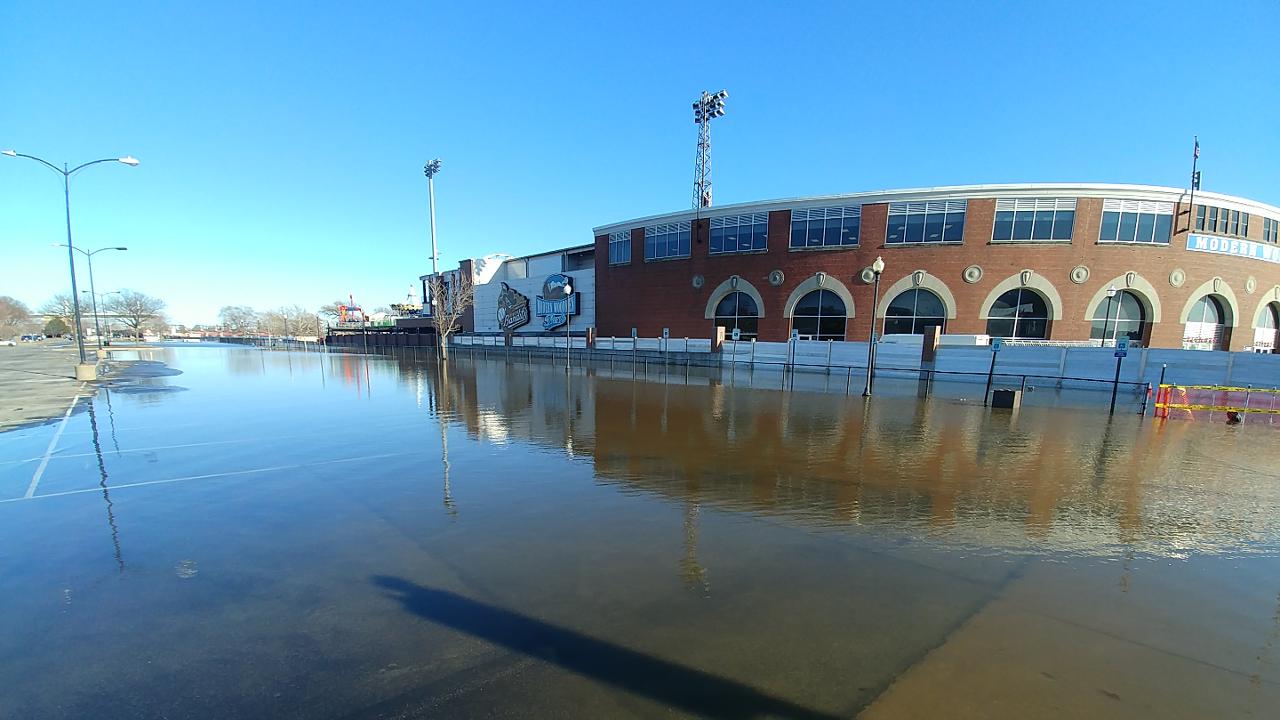 The Quad Cities River Bandits, Class-A Affiliate of the Houston Astros, will open their season in Burlington, Iowa, because of heavy flooding and new improvements to the railroads, the team announced today. The ballpark itself remains in pristine condition, well protected from the floods, but getting the players, staff, equipment and fans in and out of the ballpark remains a challenge. The games on Thursday, April 4 and Friday, April 5 will both begin at 6:00 p.m.

At this point, only the first two games of the season have been moved. The next River Bandits' home stand is scheduled to begin April 15 at Modern Woodmen Park. Those games are still planned to be played in Davenport; the city, the league and the team will make a decision about whether those games are able to be played at Modern Woodmen Park the week of April 8 based on weather and flood conditions at that time.

The City of Davenport installed a flood wall system in 2004 to provide protection to the ballpark allowing baseball to be enjoyed in the Quad Cities during river flooding, a system that was expanded and approved in 2010. Unfortunately, the particular nature of this 2019 flood has caused delays in preparing the ballpark for Opening Night as the rising flood waters have made it difficult for the team to receive food and beverage shipments as well as necessary equipment.

Additionally, for the first time Canadian Pacific Railroad is making last-minute improvements to lift the railroad track along Davenport's riverfront. These improvements allow its trains to continue operating during higher flood stages. The continuation of train operations prevents the City from installing the pedestrian bridge into the ballpark.

The flood wall at Modern Woodmen Park is an innovative and unique system that protects this valuable community asset and allows the rapid reuse of the ballpark once flood waters recede. Baseball will resume in the Quad Cities as soon as the ballpark can be safely accessed by the public.  In the meantime, the first two games of the season will be played at the Bees' home park, Community Field in Burlington, with the River Bandits as the home team.

"Davenport's Modern Woodmen Park is the greatest place to watch a baseball game," said Brandon Wright, CFO/Assistant City Administrator for the City of Davenport. "We look forward to it being open as soon as possible and appreciate the partnership the city has with the River Bandits and Minor League Baseball so that the games this week will still be played while we deal with the flood."

"We appreciate so much all of the great work being done by the City of Davenport Public Works Department to protect Modern Woodmen Park," said River Bandits owner Dave Heller. "The ballpark looks great and has been untouched by the flood waters surrounding it. Unfortunately, though, without the pedestrian bridge we are unable to receive any deliveries of food and supplies and we have no way for our staff or the public to access the ballpark. We are grateful to Kim Parker and all of our friends with the Burlington Bees for opening up their park to host our first two games and invite all of our fans to join us in making the drive down to Burlington to see the Bandits open their season."

"I continue to be impressed how well the City of Davenport and the River Bandits are able to navigate the challenges the Mississippi River sometimes throws their way," said Midwest League President Dick Nussbaum. "It is a beautiful backdrop 99% of the time but that other one percent requires everyone to work together. You all have done it again. I am also thankful to the Burlington Bees for their willingness to help in this opening series. It is going to be a great season in the Midwest League."

"We look forward to opening in Burlington and appreciate the work of the City of Davenport, the Burlington Bees and our friends at St. Ambrose during this time," said River Bandits general manager Jacqueline Holm. "We have the best fans in baseball and look forward to bringing baseball back to Modern Woodmen Park very soon."