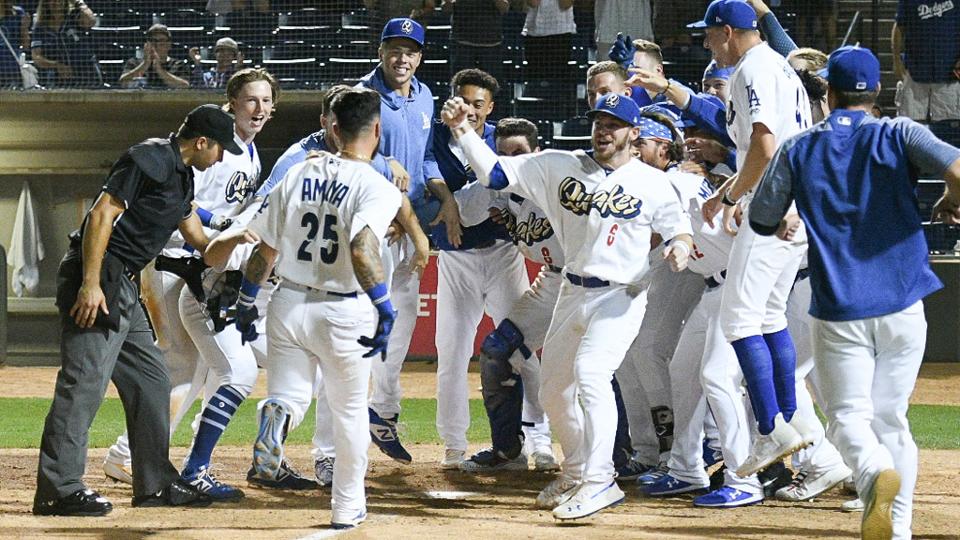 Rancho Cucamonga, CA - In what will be remembered as one of the greatest comeback wins in franchise history, the Rancho Cucamonga Quakes stayed alive in the South Division Finals and forced a game four, rallying for a 6-5 win over the Lake Elsinore Storm at LoanMart Field on Friday night.

Trailing 5-4 entering the last of the ninth inning, pinch-hitter Starling Heredia greeted Storm closer Mason Fox (0-1) with a first-pitch blast that went 428 feet down the left-field line, tying the game at 5-5.

Fox would throw just one more pitch, as Jacob Amaya slugged his very next offering 392 feet to left-center field for the walk-off blast, sending the Friday night crowd of over 3,100 fans home happy.

For Amaya, it was his second long-ball of the night, as he led off Friday's contest with a home run just two pitches into the game.

The Quakes and Storm traded blows early, as Amaya's first homer gave Rancho a 1-0 advantage after just one inning.

The Storm would answer in the second though, getting to starter Andre Jackson for three runs to take a two-run advantage.

Jeren Kendall started a three-run rally in the third though, as his solo-shot to right field made it a one-run game at 3-2. Devin Mann then reached on an error and moved to second base on a walk to Miguel Vargas. After a walk to Tre Todd loaded the bases, Brayan Morales followed with a two-run single, putting Rancho up 4-3.

That lead held until the seventh, when reliever Wills Montgomerie allowed a solo homer to Eguy Rosario, tying the game at 4-4.

In the ninth, Luis Campusano led off with a double against Montgomerie (1-0) and was lifted for pinch-runner Lee Solomon. Solomon moved to third base on a flyball to right, then scored on Rosario's sac fly to center field, giving the Storm a 5-4 lead and moving them three outs away from advancing to the Cal League Championship Series against Visalia.

Pinch-hitting for Garrett Hope, Heredia, who smashed ten homers in the regular season, absolutely pummeled the first pitch of the ninth and didn't have time to celebrate before Amaya ended the game one pitch later with the walk-off shot.

The Quakes, now trailing 2-1 in the series, will send Michael Grove to the hill on Saturday night at 7:05pm, as he'll start opposite Lake Elsinore right-hander Adrian Martinez.

Fans will enjoy Happy Hour on Saturday night from the time gates open at 6:05pm, to first pitch at 7:05pm, as Thirsty Thursday pricing will be in affect with two dollar Pepsi products, three dollar 16-ounce domestic drafts and four dollar premium drafts, wine and margaritas. Purchase your tickets at rcquakes.com or by calling (909) 481-5000… Go Quakes!