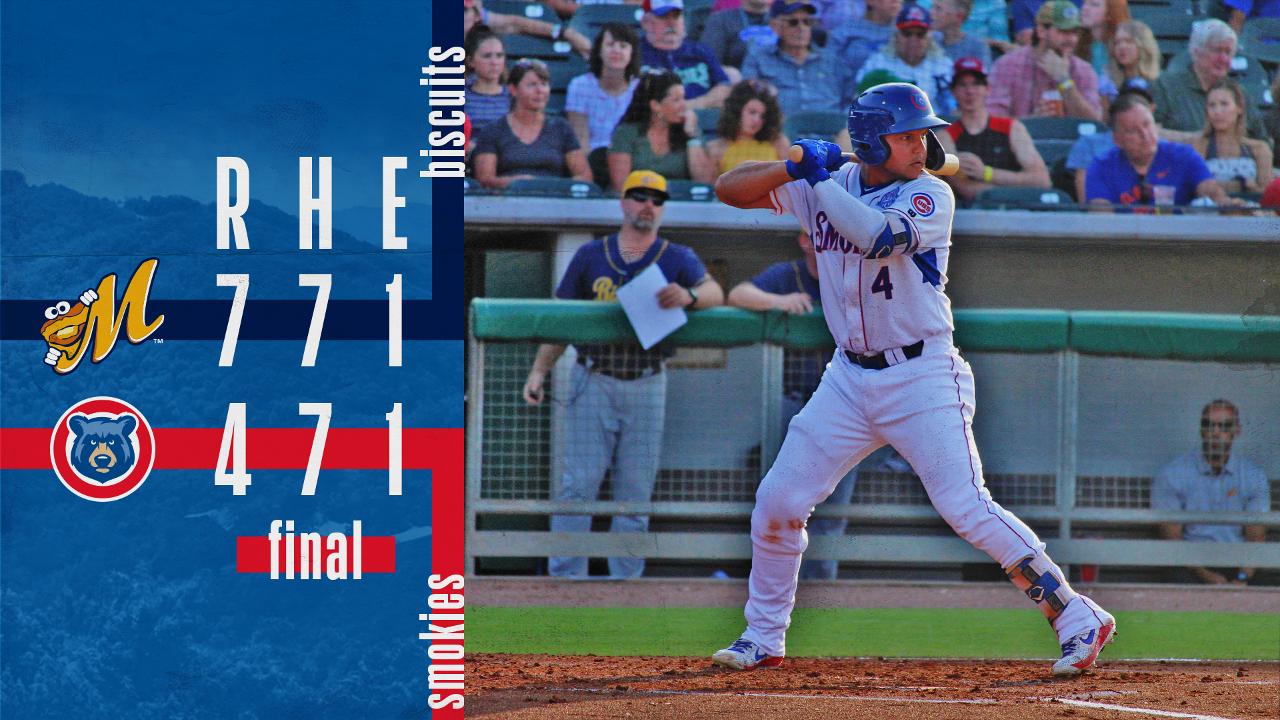 The Smokies opened the ballgame with a pair of runs in the first inning. Zach Davis ripped a double and stole third to lead off the frame. He represented the first run of the night on a fielder's choice RBI from Jared Young. Davis has now registered 14 runs in 13 total starts since joining the Smokies on 7/11.

Tennessee tallied their second run of the inning when Gioskar Amaya punctured a double down the third base line to score Young. Amaya tallied three hits in four at bats on the night and leads the Smokies this series with four total RBI's.

Smokies starter RHP Alex Lange (L, 2-3) zipped seven strikeouts and did not allow a single hit in his first four innings. That all changed as Montgomery knocked three straight singles to lead off the fifth. In total, the Biscuits tallied six runs in the frame on four hits with a pair of walks. Brett Sullivan capitalized the inning with a bases loaded double off the right field wall to clear to bases and run the score to 6-2.

Lange concluded his night after five full frames. He gave up six total runs on four hits and struck out a season high eight batters in a losing effort. In his last three outings, he has now given up 17 runs in 15 innings.

Sullivan caused more damage in the seventh inning. With two outs in the inning, he launched his second home run of the series in to left center field to run the score to 7-2. Sullivan has tallied 16 RBI's and 15 extra base hits in 19 games against the Smokies this season.

Montgomery starter LHP Kenny Rosenberg (W, 10-1) pitched six solid innings with six strikeouts and allowed just two earned runs. It was his ninth quality outing of the season and his team-leading tenth win, which is also good for second in the Southern League. He turned the ball over to RHP Blake Bivens in the seventh and the Smokies were able to capitalize. Jhonny Pereda plated Davis on a groundball to second. Amaya followed with his second RBI of the night to score Nico Hoerner and cut the deficit down to 7-4.

LHP Manuel Rondon provided two hitless and scoreless innings out of the bullpen, but it was not enough. RHP Phoenix Sanders (S, 15) sealed a game four win for the Biscuits with his second save of series.

The series finale between the Smokies and the Biscuits is scheduled for Friday night with first pitch scheduled for 7:00 EDT. RHP Erick Leal (1-1, 5.28) makes his fourth start of the season for the Smokies, while RHP Jason Garcia (3-0, 2.81) will get the ball for Montgomery. Come out to the Smokies Stadium for kids takeover night presented by Smile Doctors. The first 500 kids 12 and under through the gates will receive a Smokies lunchbox