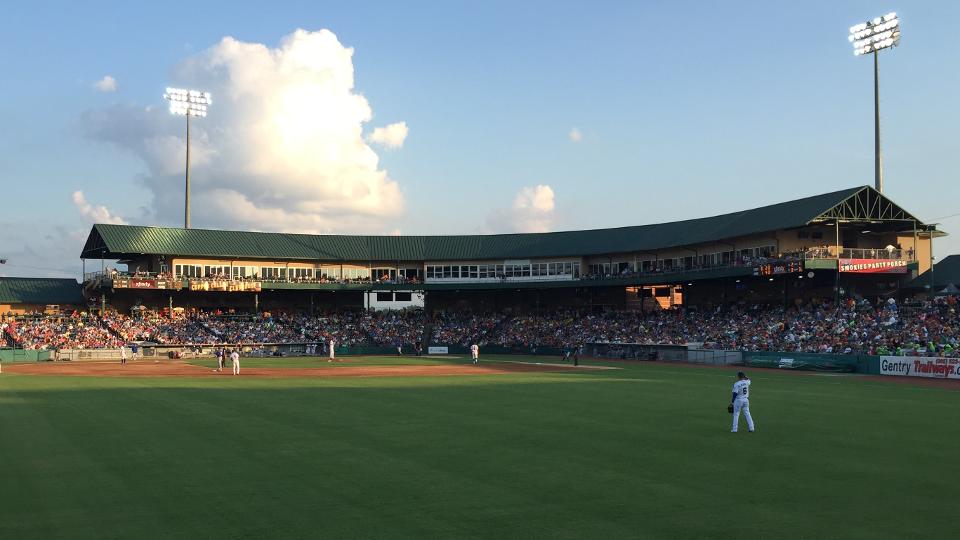 The Smokies broke a single-game attendance record for the third time this year on Friday night. (Andrew Green/Tennessee Smokies)

With the victory, the Smokies improved their second half record to 12-15, in addition to a 51-45 overall tally in 2015. The defeat dropped Chattanooga to 9-17 since the Southern League's All-Star break, as well as a 52-42 mark throughout the entire campaign. The record crowd marked the third time this season the club has welcomed a record-setting crowd to Smokies Stadium this year, besting the previous stadium record of 7,805 that was set on June 19 versus the Mississippi Braves.

Hannemann (4-5, 3 R, 2B, 2 3B, 2 RBI) recorded his second four-hit effort of the year for the Smokies, falling a home run short of the cycle while tallying one double and two triples while scoring thre runs and driving in two. The outfielder previously tallied four hits on June 13 at Jacksonville, incidentally coming a single shy of hitting for the cycle in that contest.

For the fourth consecutive game, the Smokies jumped out to an early advantage, plating a tally in the opening frame. Hannemann got the first of his four hits by leading off Tennessee's order with a double to right, and then would come around to score via C Willson Contreras' run-scoring two-bagger down the left field line to make it a 1-0 lead.

The Lookouts would leap ahead of the Smokies in the third, however, thanks to a double of their own. CF Shannon Wilkerson started the frame with a double just inside the third base bag, while SS Heiker Meneses and 1B Kennys Vargas drew a free pass to load the bases for LF Adam Brett Walker, who slammed a two-run double off the leff field wall, plating Wilkerson and Meneses to move Chattanooga ahead 2-1.

Tennessee, would strike right back, though, with a two-spot of their own in the bottom of the third. Almora Jr. began the inning on a high note, lacing a solo home run down the left field line and just under the Calhoun's At The Yard pavilion, his fourth of the season, to even the contest before the Smokies later took the lead. SS Elliot Soto immediately followed Almora Jr. with a double to right, and later moved to third on a groundout before 3B Jeimer Candelario's clutch RBI base hit to left, pushing Tennessee ahead 3-2.

That margin would increase even further in the sixth when the team doubled their run total with a three-spot. 2B Stephen Bruno and 1B Wes Darvill each drew one-out walks to send up Hannemann, who brought both home with a two-run triple into the right-center field gap to make it a 5-2 ballgame. Almora Jr. would later drive in his second run of the evening with an RBI groundout to raise that lead to four.

Chattanooga would cut their decifit back down to three in the seventh, though they were held without more thanks to a fine web gem. Wilkerson drew a one-out walk, and then moved from first to third via Meneses' base knock to left, before coming across on a wild pitch to make it 6-3. After DH Max Kepler slapped a single to right to put runners on the corners with two outs, Vargas lofted a fly ball into shallow center field, but Hannemann charged in and made a diving face-first grab to end the threat and preserve the three-run cushion.

The Smokies would answer back with a single tally in the seventh. Contreras began the frame with a single and then took second on a groundout before coming home when Bruno ripped a run-scoring single into left field to put the lead back to four at 7-3.

Both teams then traded single tallies again the eighth frame to close out the scoring. 2B Levi Michael drew a bases-loaded walk to cut Chattanooga's margin to three temporarily, while Hannemann in the bottom of the frame led off with a triple to left-center field before coming across on Almora Jr.'s sacrifice fly, his third RBI of the night.

Tennessee continues their three-game homestand Saturday evening against the Lookouts, with first pitch scheduled for 7:05 p.m. against the Minnesota Twins' Double-A affiliate. The Smokies are expected to give the nod to RHP Andres Santiago (1-3, 4.42), while Chattanooga is slated to counter with LHP David Hurlbut (6-4, 4.25).

The Smokies will be celebrating Christmas in July at the ballpark, with the first 1,000 fans in attendance receiving a Smokies Snow Globe featuring Homer the Hound. In addition, the team will be wearing special Ugly Christmas Sweater themed jerseys that will be raffled and auctioned off to benefit Remote Area Medical. There will also be Christmas themed music, games, graphics and more at the ballpark, with gates opening at 5:45 p.m.

Tickets for all remaining home contests at Smokies Stadium, are on sale and can be purchased online at smokiesbaseball.com, or by calling the Smokies Ticket Office at 865-286-2300.