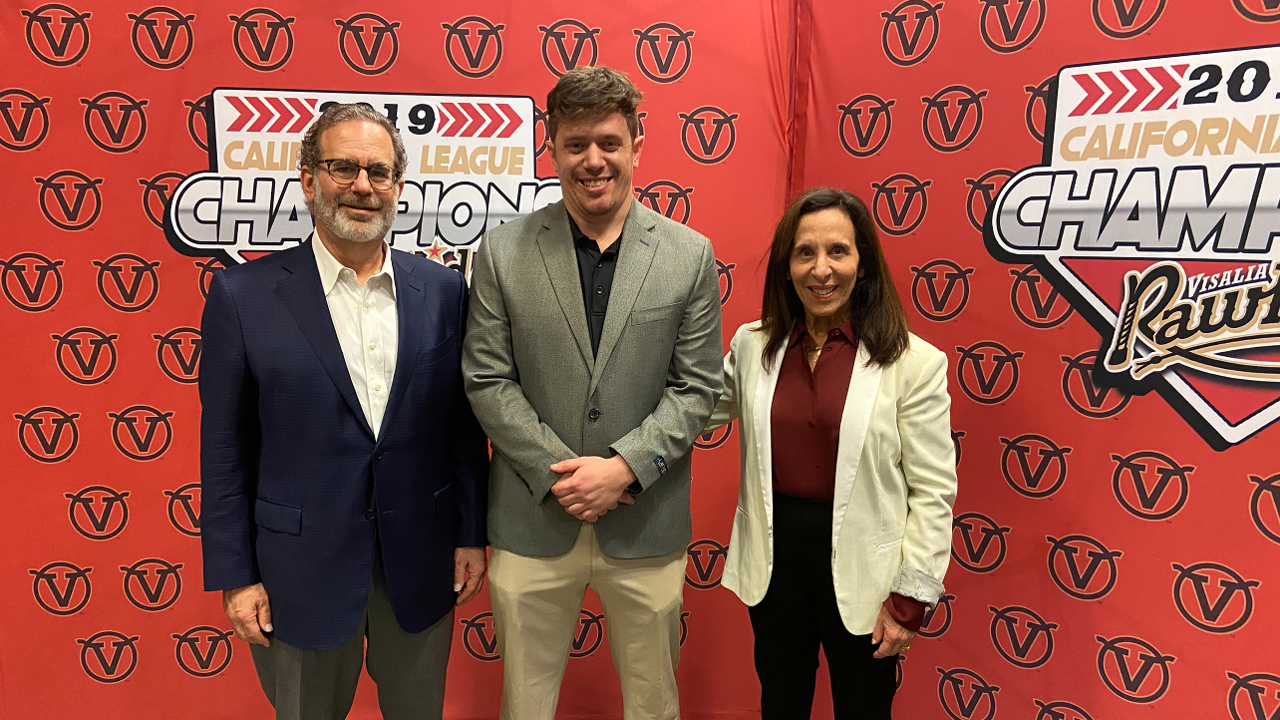 VISALIA, CA - First Pitch Entertainment, LLC is set to become the new owners of the Visalia Rawhide, subject to final approval of Major League Baseball. After a long, successful stewardship in Visalia, Top of the Third, Inc., representing the Seidler-O'Malley family ownership group, is selling the team to another family ownership group, the Sigal family.

Sam Sigal, Vice President and Co-Owner of First Pitch Entertainment has moved to Visalia to be an active member of the community and the on-site representative of the ownership group. He will work closely with the current team management.

In addition to Sam, the ownership includes his parents, Ruth and Elliott Sigal, M.D. Elliott serves as Manager of First Pitch Entertainment, LLC.

"During our extensive search for the perfect team, we fell in love with the Visalia community & the rich history of the ballclub," says Sam. "As we attended games, we felt like we became part of the Rawhide Family & knew this was the team for us. We are thrilled to inherit such an established organization & its community values. We look forward to our family becoming a part of the fabric of the community and extending the tradition of professional baseball in Visalia for years to come."

"Looking into 2020 and beyond," Sam continued, "We are working closely with current Rawhide staff, fans, the City of Visalia, and the Arizona Diamondbacks to formulate our plans for the future. We are pleased to announce the addition of a videoboard at the ballpark for the 2020 season. The videoboard will be in left-center field, 17' tall by 35' wide, and will represent a state-of-the-art digital experience for fans attending the ballpark for games or events."

As Top of the Third steps down, First Pitch Entertainment and the Visalia Rawhide remember the legacy of the Seidler and O'Malley family. Top of the Third owned the Rawhide for 18 years, the longest tenure in the 73-year history of professional baseball in Visalia. The team is entering the 14th year with the Arizona Diamondbacks, which is the 2nd-longest MLB affiliation in club history. In the final season of their ownership, the Rawhide brought home the California League Championship, but that was not the first year of success. Visalia was crowned Northern Division Champions in 2006, 2014, 2016, 2018 and 2019. During the 18-year ownership, 135 players came through Visalia and went on to play for a MLB team.

Top of the Third also left its mark on the ballpark and in the community involvement of the club. The ownership group invested over $1,000,000 in ballclub funds to the city-owned facility. They broke the 62-year-old attendance record in 2009 and again in eight of the last 11 seasons, including this past 2019 season as 129,118 fans enjoyed regular season Rawhide games before the great post-season championship run. The Rawhide Host Family program has become one of the best in the country by housing 100% of the players and coaches with generous local families. In addition, the Play Ball program, which provides baseball equipment and instruction to children in the community, and the Rawhide Readers program, which promotes literacy to area youth, were established in Visalia under the leadership & vision of Top of the Third.

"We spent over a year on our search for new ownership because we wanted to make sure whoever came in would be the right fit for the future of the ballclub, the city, and the staff. We are thrilled to be passing ownership from one family to another. The Sigal family will be a great fit for the Visalia community & and the ballclub for years to come," explained Tom Seidler, Team President.

With this change in ownership comes change in the front office staff.

Five-year veteran, Julian Rifkind, has been promoted to Assistant General Manager. Rifkind is originally from Brooklyn, NY and moved to Visalia for the 2015 season as an intern, working his way up the ladder on the baseball/ballpark operations side of the organization.

Mike Candela has been welcomed back to the front office, also as an Assistant General Manager. Like Rifkind, Candela is originally from Brooklyn, NY and moved to Visalia in 2008 to take over the ticketing operations at that time. He spent five years in Visalia before joining the team in Bakersfield and working his way up to General Manager of that organization. After the re-location of the Bakersfield team, Candela accepted a Vice President position with the Quad Cities River Bandits in Iowa. Wanting to be closer to his wife's family in the Visalia-area, Candela recently accepted the position with the Rawhide & re-joined the staff in October.

"It means so much to me that the Sigal family shows the same dedication to the community that the Top of the Third ownership group did. Both of these families share similar values & vision for the direction the ballclub is going. You can expect the same care & passion for the community as you've seen the past decade from the Rawhide staff. We are excited to see what is in store for the next generation of our Rawhide Family," stated Rawhide General Manager, Jennifer Reynolds.

Ownership of the Visalia Ballclub over the years

About the Visalia Rawhide
The Visalia Rawhide are a professional baseball team in the Class A Advanced California League and are the only professional sports team in Tulare and Kings counties. The team has been an affiliate of the Arizona Diamondbacks since 2007 and is entering their 74th year of play in 2020. The Rawhide renovated their home at Recreation Ballpark in 2009 and have since become the largest gathering of individuals in Tulare County. In 2020, the Rawhide look to continue their reputation for hosting competitive baseball while providing affordable family entertainment and defending the 2019 California League Championship. Opening day for the 2020 season is Thursday, April 9th against the Stockton Ports. To be a part of the 2020 Visalia Rawhide season, please contact the Visalia Rawhide Ticket Office at 559.732.4433, visit us online at rawhidebaseball.com, or follow us on Facebook (TheRawhide), Instagram (@VisaliaRawhide), and Twitter (@VisaliaRawhide).