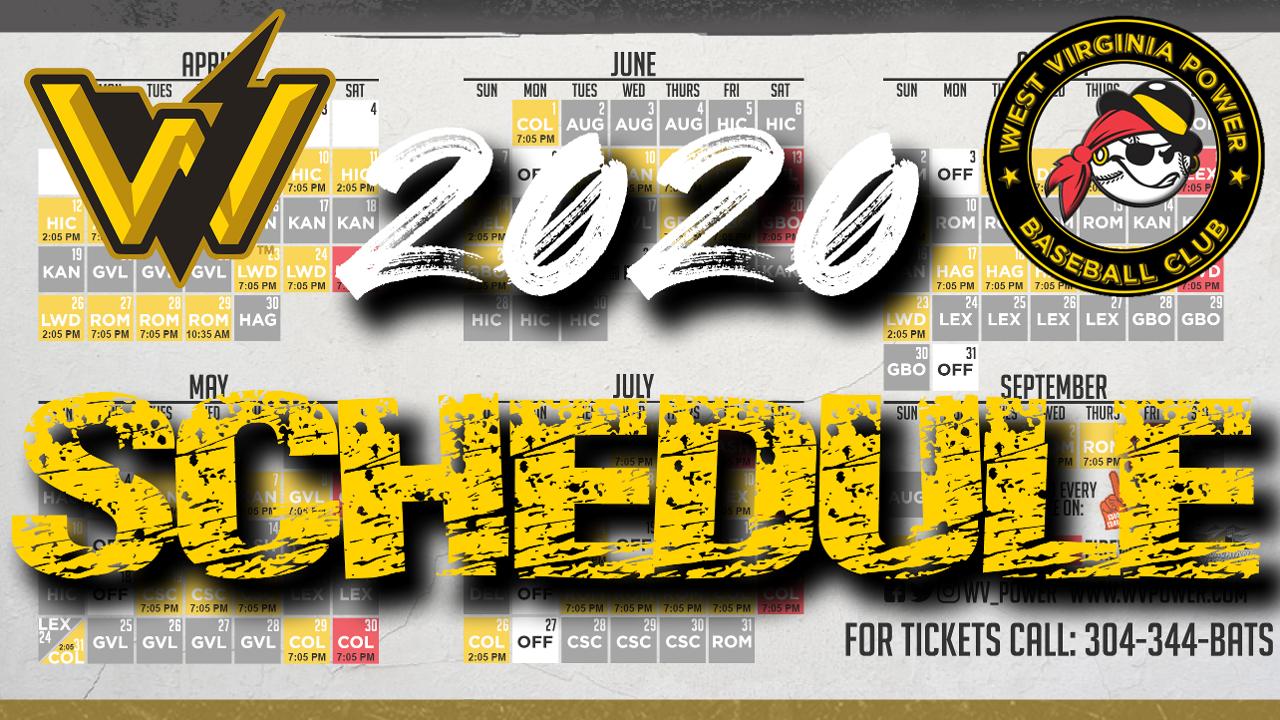 The Power is set to open their 16th season on Thursday, April 9, 2020, at Appalachian Power Park.

CHARLESTON, W.Va. (October 2, 2019) - The West Virginia Power, Low-A affiliate of the Seattle Mariners, is excited to release its 2020 schedule and home game times for the 16th season of baseball at Appalachian Power Park. The 2020 campaign begins Thursday, April 9, when the Power welcomes the Hickory Crawdads to Charleston for a four-game series. West Virginia will host 12 of the 13 opposing South Atlantic League teams at Appalachian Power Park in 2020, as the Augusta GreenJackets will not make the trip to The Capital City next season.

Similar to the 2019 season, all Monday through Friday home games, with a few exceptions, will have a 7:05 p.m. first pitch. New in 2020, all Saturday home games, minus the first Saturday home contest of the year, April 11, will also start at 7:05 p.m. to accommodate nine of the team's 12 fireworks shows. Sunday home dates will maintain a 2:05 p.m. first pitch slot, while the Power will have four special early weekday start times. Wednesday's games on April 15, April 29 and May 6 will begin at 10:35 a.m., while Tuesday's game on July 14 will commence at 12:05 p.m.

The season's opening month includes 14 home games, starting with a seven-game homestand against Hickory and the Asheville Tourists. The Power will then hit the road to face the Kannapolis Intimidators in North Carolina for the first time since 2018. West Virginia will also be the first visiting team to experience Kannapolis' new facility, which is set to open Thursday, April 16.

The Power will play 20 of their first 31 games in Charleston, dating through the team's first May homestand, a six-game duel with Kannapolis and the Greenville Drive. West Virginia then hits the road for 19 of their next 26 games through June 7, a trek that will include the team's first departures to Asheville, Augusta, Greenville, Hickory and Lexington. The Power wraps up the first half with 10 of their 11 home games in June, with all 10 home contests featuring Northern Division opponents (Delmarva, Greensboro and Kannapolis).

West Virginia continues its interdivisional bouts in the second half with a six-game trip to Hickory and Kannapolis, closing out the month of June. The Power then embarks on their heaviest home-scheduled month of the 2020 season, a 16-game July slate that includes the team's Independence Day Extravaganza on Friday, July 3, and three fireworks shows, the most in any month during the year.

Starting July 21, the team will play 19 of their next 22 games against Southern Division opponents, with 11 of those bouts coming against the Rome Braves. The month of August features 13 home games, while 13 of the Power's final 17 August games are versus Northern Division opponents. West Virginia concludes its 2020 home slate with a four-game series against Rome from September 1-4, while the team finishes the season on the road with a three-game series in Augusta, South Carolina.

Overall, the Power will host 38 divisional games at Appalachian Power Park in 2020. Rome is the lone team to make three visits to Charleston next season, with 10 contests scheduled in the Power's friendly confines. West Virginia will face off with seven teams in double digit match-ups in 2020, with a league-high 20 games against Kannapolis (only six at home).

Season tickets for the 16th season of West Virginia Power baseball will be available online soon. For more information on the upcoming 2020 season at Appalachian Power Park, call the Power at 304-344-2287 or visit www.wvpower.com.