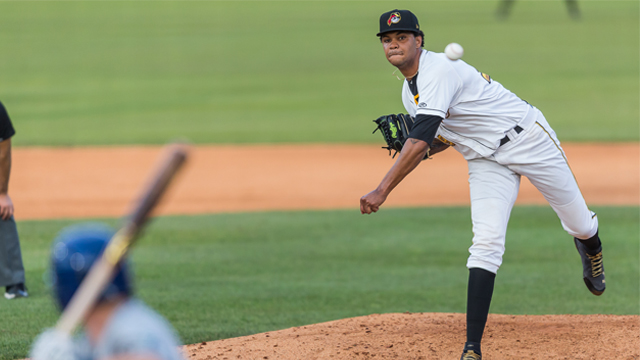 CHARLESTON, S.C. (September 2, 2018) - Oddy Nunez spun a quality start for West Virginia, but it was not enough for the Power, as they fell, 3-2, to the RiverDogs Sunday afternoon at Joseph P. Riley, Jr. Park, keeping their magic number to clinch a playoff spot at one.

West Virginia (34-32, 71-61) waited until the sixth to crack the scoreboard. Lolo Sanchez led off the frame with a base knock. He advanced to second on a Connor Kaiser single. With runners on first and second, Calvin Mitchell drilled a double off the wall in right-center to plate Sanchez and move Kaiser to third. The Power shortstop would scamper home on a wild pitch from RiverDogs starter Shawn Semple (2-0) to bring West Virginia within one.

Nunez (1-1) worked West Virginia's seventh consecutive quality start. He spun 7.1 frames, a season-high for him with the Power, while allowing three runs (two earned) on eight hits and striking out four batters. The lefty set down the first 10 men that came to the plate against him.

Joel Cesar relieved Nunez with two runners on and one out in the eighth. Cesar fanned Oswaldo Cabrera and forced Dermis Garcia to fly out to end the frame without allowing any more damage.

The RiverDogs (30-37, 63-72) scored their runs in the fourth and the fifth. With one out in the fourth, Cabrera drew a walk, and then three consecutive Charleston batters, D. Garcia, Chris Hess and Leonardo Molina, singled. Molina's single sent in both Garcia and Hess to open the scoring at 2-0 RiverDogs.

In the fifth, David Metzgar came home from third on a sacrifice fly to center field from Jerry Seitz, increasing Charleston's lead to 3-0. That run ended up being the decisive tally for the RiverDogs.

Semple ended up tossing six innings and ceding two runs on five hits while striking out seven batters in his second South Atlantic League start. Alexander Vargas (S, 4) twirled three scoreless innings and fanned two to pick up his fourth save of the season.

The Power concludes their regular season schedule against the RiverDogs at Joseph P. Riley, Jr. Park Monday afternoon, with first pitch set for 2:05 p.m. RHP Sergio Cubilete (5-5, 5.23 ERA) takes the hill for West Virginia, while Charleston counters with righty Miguel Yajure (4-3, 3.62 ERA). Pregame coverage begins at 1:45 p.m. on The Jock 1300 and 1340 AM, as well as online at www.wvpower.com and via the TuneIn Radio App and MiLB First Pitch App.

The Power is in a playoff push. Should they make the playoffs, Appalachian Power Park would host game one of the Northern Division Championship Series on Wednesday, September 5, at 7:05 p.m. For tickets and more information, call the Power at 304-344-2287 or visit wvpower.com.