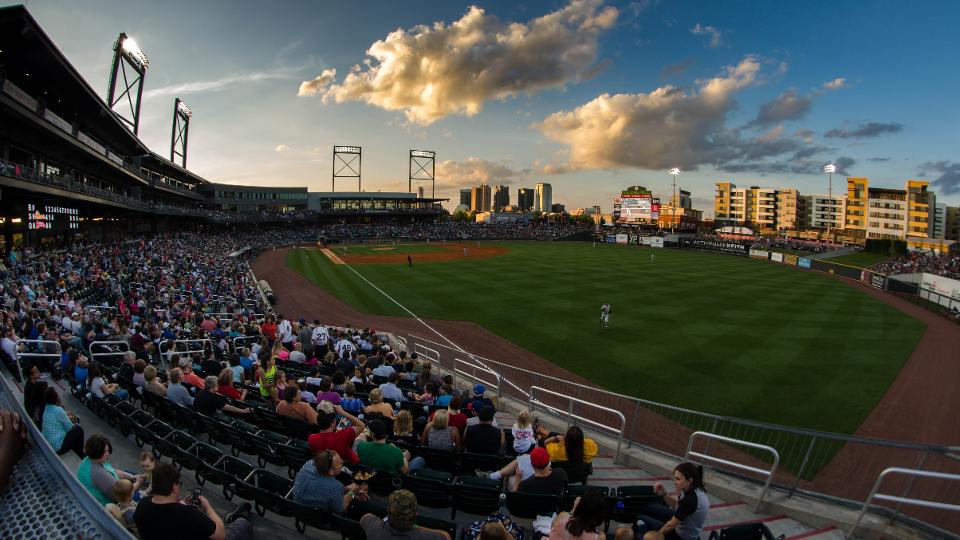 BIRMINGHAM, AL - The Birmingham Barons return to Regions Field Tuesday, May 31st to open a five game series with the Chattanooga Lookouts that includes the 21st edition of the Rickwood Classic, presented by Levy's Fine Jewelry.

The annual Rickwood Classic will take place at Rickwood Field, with a scheduled first pitch at 12:30 p.m. Hall-of-Fame pitcher Rollie Fingers will be the guest of honor, throwing out a ceremonial first pitch and signing autographs throughout as the Barons celebrate the 1967 Birmingham A's team.

Prior to the Classic, 50-cent Hot Dog Night brings the Barons back to Birmingham for a 7:05 p.m. first pitch on the 31st of May, presented by Kayem, Flowers Baking Co., Birmingham Zoo, MINI of Birmingham, WIAT 42, and O'Charley's. The Barons will once again host a Social Media Night theme at Regions Field, where fans in attendance can win a variety of prizes throughout the evening.

Following the return to Rickwood, the Barons head back to Regions Field for the fifth Thirsty Thursday of the season, presented by Miller Lite, Woodbridge and Buffalo Wild Wings; with a pregame concert along the first base concourse brought to you by Birmingham Mountain Radio. First pitch is slated for 7:05 p.m.

The Barons will once again host a postgame Friday Night Fireworks show presented by Hibbett Sports, Alabama Power, and Coca-Cola, as FIAT Friday, presented by FIAT of Birmingham, continues the five game series into the weekend. Friday, June 3rd also marks a Church Night at Regions Field, with space still available for congregations looking to hold group outings at the ballpark.

The first 1,000 fans inside Regions Field Saturday evening will receive a Regions Field mini-bat presented by Mezrano Law Firm, as the Barons and Lookouts wrap up their series with a 6:30 p.m. first pitch. June 4th will be a special night at the ballpark as the Barons will don custom jerseys as part of a "Los Barons Night" theme, presented by HICA!

Birmingham welcomes in Mobile as the Barons and BayBears start a five game series Sunday, June 4th with a Salute to Armed Forces Sunday presented by NAPA. First pitch is scheduled for 6:00 p.m.

The first Kids Camp Day of the season is slated for Monday, May 6th, with first pitch of the latest YP Monday matinee scheduled for 11:30 a.m. Wednesday's penultimate game of the series, a AAA Wednesday presented by AAA of Alabama, will also feature an early start as the Barons and BayBears are set to get underway from Regions Field at 11:00 a.m.

Sandwiched between the two day games is the second Social Media Night of the 10-game stretch at Regions Field, with Birmingham and Mobile facing off for a 50-cent Hot Dog Night matchup presented by Kayem, Flowers Baking Co., Birmingham Zoo, MINI of Birmingham, WIAT 42, and O'Charley's at 7:05 p.m.

The first 10-game homestand of the season wraps up Thursday, June 9th, as the Barons and BayBears duke it out on a Thirsty Thursday, brought to you by Miller Lite, Woodbridge, and Buffalo Wild Wings. Follow the Barons on Twitter and Facebook for further details on that night's edition of the Thursday Night Concert Series, presented by Birmingham Mountain Radio. First pitch is once again scheduled for 7:05 p.m.

About the Birmingham Barons

The Birmingham Barons hit the road for a five game series against the Pensacola Blue Wahoos before returning to Regions Field May 31st for a ten game series that includes the 21st edition of the Rickwood Classic Wednesday, June 1. For further information about the Barons and the 2016 season at Regions Field, please call (205) 988-3200 or visit www.barons.com, www.facebook.com/birminghambarons or on Twitter: @bhambarons.