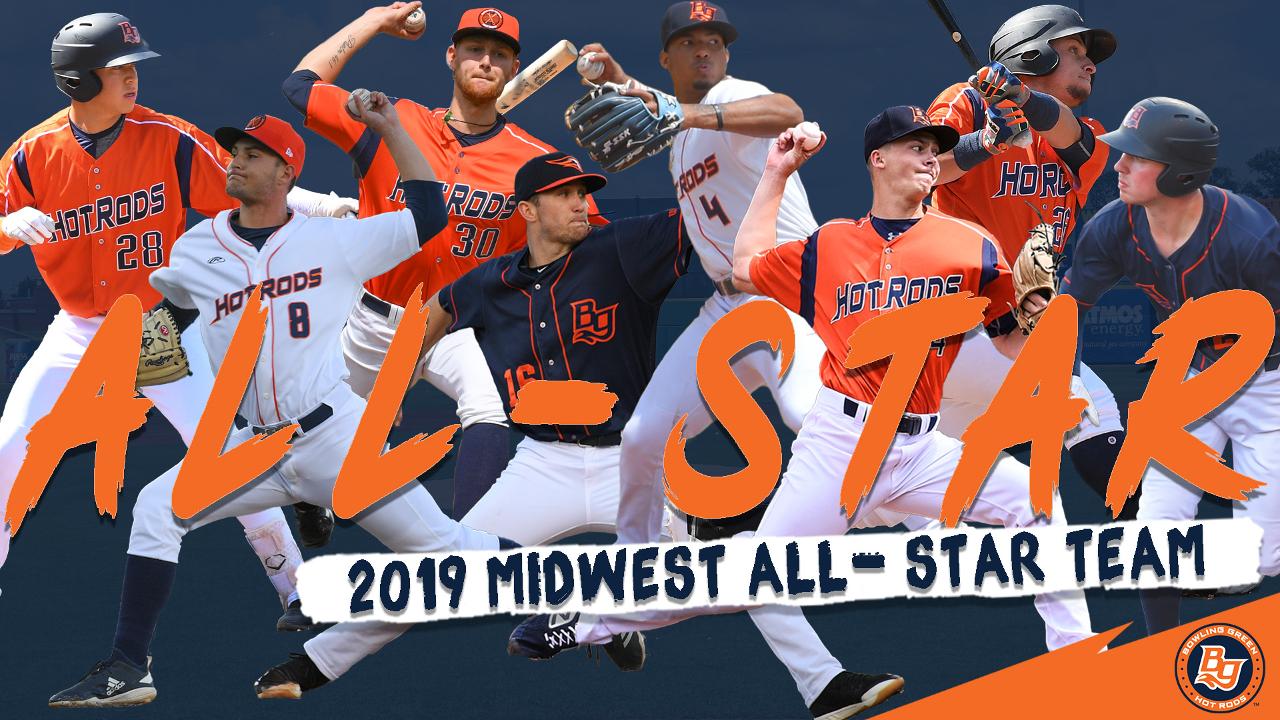 Bowling Green, KY- The Bowling Green Hot Rods, Class-A affiliate of the Tampa Bay Rays, and the Midwest League announced that eight players have been selected to the 2019 Midwest League Eastern Division All-Star Roster on Wednesday. Four position players, three of which will start, and four pitchers will take part in the MWL All-Star Game on June 18 in South Bend, IN.

Eighteen-year-old Wander Franco is in fourth-place in the Midwest League with a .321 batting average. The Dominican native is in his first year of full-season baseball and is top-five in the league in average, slugging (3rd, .527), OPS (3rd, .916), and extra-base hits (5th, 23). He's also top-10 in on-base percentage (9th, .389), hits (T-7th, 59), doubles (T-8th, 14), and total bases (7th, 97). Franco has six home runs with 25 RBI in 2019, while adding 11 stolen bases. He's also the top prospect in the Tampa Bay Rays system and is the number-five prospect in baseball according to MLB.com. 2019 is Franco's second-straight all-star selection, having been named to the 2018 Appalachian League Post-Season All-Star team where he was also Player of the Year.

McClanahan is the Rays number-11 prospect and is in his first year of full-season work, as well. The southpaw boasts the sixth-lowest batting average allowed in the league (.202) and is second in the MWL in strikeouts as of Wednesday with 68. The 31st overall pick in the 2018 draft, McClanahan earns his first-career All-Star nod with a 4-3 record and a 3.38 ERA through 10 games and nine starts this season. He's struck out nine in a game four times and at least five in all but one appearance for Bowling Green.

Betts will be the Eastern Division's backstop in South Bend a year after earning a Mid-Season All-Star selection with the Hudson Valley Renegades in the New York-Penn League. The left-hand hitting catcher has a .229 average this season while accumulating 11 home runs, good for third in the league, with 32 walks - a number that has him tied for fifth. A second-round selection in the 2015 draft, Betts has impressed behind the plate, committing just three errors while holding a 2.90 catcher's ERA this season. Betts homered twice in a game twice this season and is just the third Hot Rod batter in team history to have more than one such game in a season.

McGee is having a breakout season in his fourth year as a pro and earns the first All-Star selection of his career. Drafted out of Hopkinsville High School (Kentucky) in the fourth round of the 2016 draft, McGee has 4-1 record with a 2.70 ERA (10th in the league) and a 1.14 WHIP this year through 11 appearances, all of which are the lowest totals of his career. McGee has an .800-win percentage this season, which is tied for the third-best mark on the circuit.

Alvarez, who joins Betts as Bowling Green's tandem of catchers selected, will start the 2019 Midwest League All-Star Game as the Eastern Division's designated hitter. Just 19-years-old, Alvarez is batting .254 with two home runs and 17 RBI, adding 17 runs to his credit this season. The Venezuelan native joins Franco and Betts as a two-time All-Star, having earned the honor in 2018 with the Princeton Rays in the Appalachian League.

Sampen has been a revelation for the Hot Rods and Rays since coming over from the Los Angeles Dodgers in an off-season trade. The righty has logged the fourth-most innings in the league with 58.0 while owning the 10th-best WHIP (1.12) and holding opponents to a .213 batting average in 2019. He also earned MWL Pitcher of the Week honors in May after holding the Peoria Chiefs to one-hit over seven shutout innings, racking up eight strikeouts.

Witherspoon, the Rays 4th-round pick in the 2018 draft, will be the Eastern Division's reserve outfielder. The left-handed hitter has a .276 batting average through 48 games this season and has logged 15 multi-hit games in 2019. That total includes a four-hit effort on May 24 against the Dayton Dragons. A product of Tulane, Witherspoon has scored 29 runs while driving in 25 and has homered six times in his second season as a professional to go along with 11 stolen bases.

Last, but not least, is Strong. The right hander has been a rock in the Hot Rods rotation, going 4-1 with a 2.45 ERA which is good for sixth in the league. He's tied with McGee in win percentage while his super-low 0.97 WHIP is the best in the Eastern Division and second in all of the MWL. Strong has 48 K's in 51.1 innings of work and has walked just eight batters this season. A 10th-round pick in 2018 by Tampa Bay, the righty earns the first All-Star nod of his career.

The eight selections are tied for the second-most in franchise history, having reached that total two other times while 2013's nine selections are the team record. A total of 63 Hot Rods have been selected to the MWL All-Star Game since joining the league in 2010 and have a total of 65 All-Stars since the franchise began in 2009 as a member of the South Atlantic League. The 2018 MWL Championship team had seven selections.

The Hot Rods finish their series with the South Bend Cubs on Thursday and return to Bowling Green Ballpark for the final home stand of the first-half from June 7-13. June 7 is Hall of Fame Night, where former Hot Rod and 2018 American League Cy Young Award winner Blake Snell will become the third member in the Hot Rods Hall of Fame. The first 999 fans through the gates will receive a Snellzilla bobblehead presented by Reinhart Foodservice. Tickets are available now by calling the Hot Rods Front Office at 270-901-2121 or by visiting www.bghotrods.com.