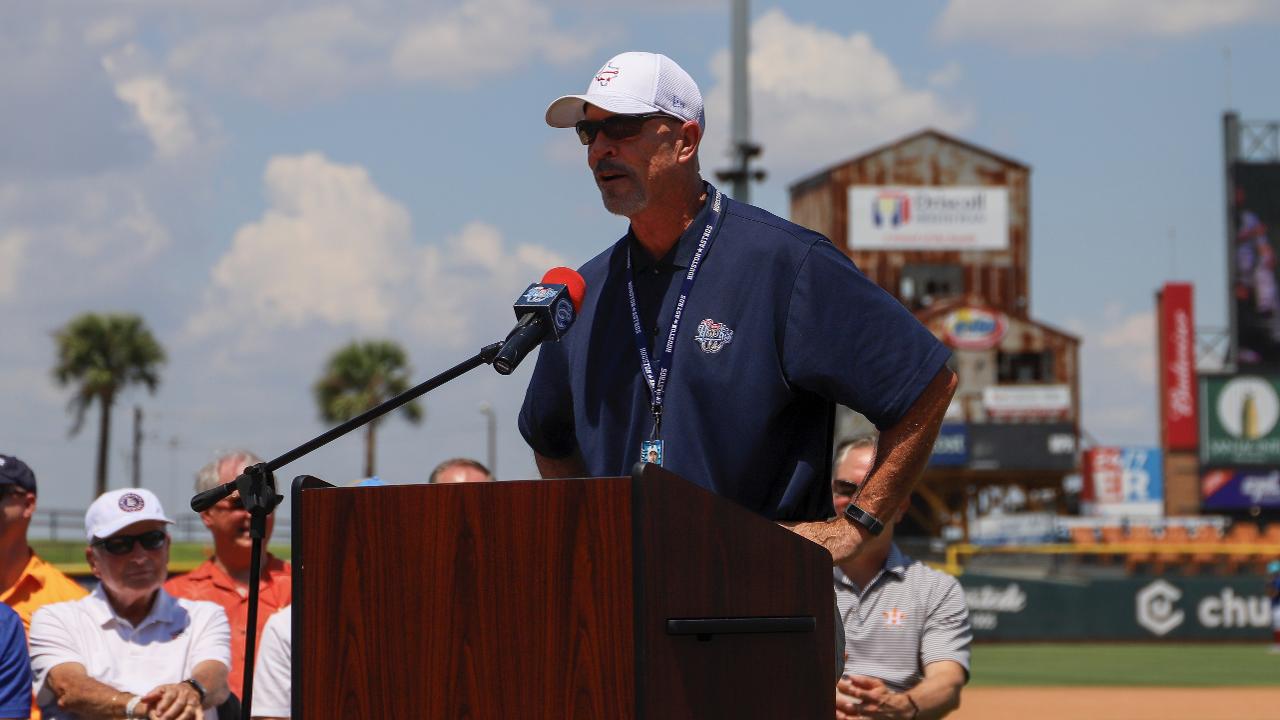 The Hooks honored longtime President Ken Schrom with a ceremony prior to Sunday's game versus Tulsa. (Olivia Rook/Corpus Christi Hooks)

CORPUS CHRISTI - In celebration of Ken Schrom's retirement after 43 years in professional baseball, 16 of which were spent as a front office executive of the Corpus Christi Hooks, the team hosted Ken Schrom Day on Sunday at Whataburger Field.

The Hooks officially named the area outside the ballpark entrance "Ken Schrom Plaza," with his family presenting a replica of the plaque that will stand at Whataburger Field for generations to come. The first 1,500 fans entering at the very plaza Sunday received a commemorative Ken Schrom Bobblehead, courtesy of ValueBank Texas.

WHEREAS, the Corpus Christi Hooks, Double-A affiliate of the Houston Astros, who play their home games at beautiful Whataburger Field, since 2005 have served as a beacon for family entertainment, community service and business development; and

WHEREAS, Kenneth "Ken" Schrom, who arrived in Corpus Christi in 2003 as a club executive of the then-unnamed Hooks, helped lay the groundwork for professional baseball in Corpus Christi from stadium conception to full operation; and

WHEREAS, during a seven-year Major League career as a pitcher with the Toronto Blue Jays, Minnesota Twins and Cleveland Indians, Schrom compiled a 51-51 lifetime record with a 4.81 ERA and 22 complete games in 900.0 innings. In 1983, he was named Twins Pitcher of the Year after posting a 15-8 record and 3.71 ERA. Schrom was Cleveland's Opening Day starter in 1986 and earned a spot on the American League All-Star team; and

WHEREAS, Schrom plans to retire at the conclusion of 2019 after 43 years in professional baseball. Originally from Grangeville, Idaho, he spent 32 years in the Texas League between El Paso and Corpus Christi.

NOW, therefore, pursuant to the powers vested in me as Mayor of the City of Corpus Christi, I do hereby proclaim,

in Corpus Christi, Texas, and encourage all citizens to honor and recognize Ken Schrom for his significant contributions in bringing professional baseball to Corpus Christi, his achievements as a player and mentor and his role as a leader for a model franchise in Minor League Baseball, and to congratulate Ken on his retirement!