Dunedin takes game one, but Miracle bounce back with 5-2 victory in game two 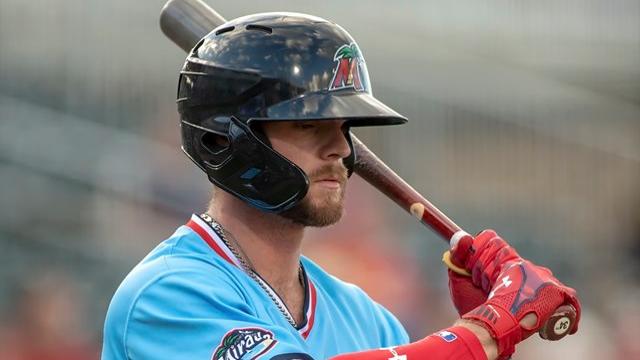 CLEARWATER, Fla. - Trey Cabbage blasted a three-run home run to lift the Miracle to a 5-2 win over the Dunedin Blue Jays in game two of a doubleheader on Tuesday afternoon at Jack Russell Memorial Stadium. Dunedin took game one, 3-2.

With the Miracle down 1-0 in the fifth, Cabbage belted his homer to the opposite field in left center field off the scoreboard. Fort Myers added single runs in the sixth and seventh on a sacrifice fly by Chris Williams and an RBI single by Ernie De La Trinidad.

Dakota Chalmers (1-1) earned the win with seven strikeouts in five innings. He allowed one run on three hits and walked three. Zach Neff picked up a six-out save, his sixth of the season. He allowed a run and struck out three.

Jose Miranda went 3-for-3 with a walk, two doubles, and two runs scored.

In game one, Dunedin struck first on a Kevin Vicuna RBI double in the second. Yeltsin Encarnacion drove in both runs for the Miracle with a pair of RBI singles and went 3-for-3 to extend his hitting streak to eight games. The first came in the fifth inning to tie the game.

Reggie Pruitt delivered an RBI double to put Dunedin up for good in the bottom of the fifth. Ryan Noda added a solo home run in the sixth. Encarnacion brought the Miracle within a run with his second RBI single in the seventh.

Maximo Castillo (11-5) picked up the win for Dunedin. The right-hander allowed an unearned run on four hits in 5.1 innings. He struck out five. Jackson Rees recorded the final five outs to earn the save. Lachlan Wells (2-5) suffered the loss for the Miracle. He allowed two runs on five hits in five innings.

The Miracle and Dunedin will play another doubleheader on Wednesday night at Jack Russell Memorial Stadium. First pitch for game one is 5:00 p.m.