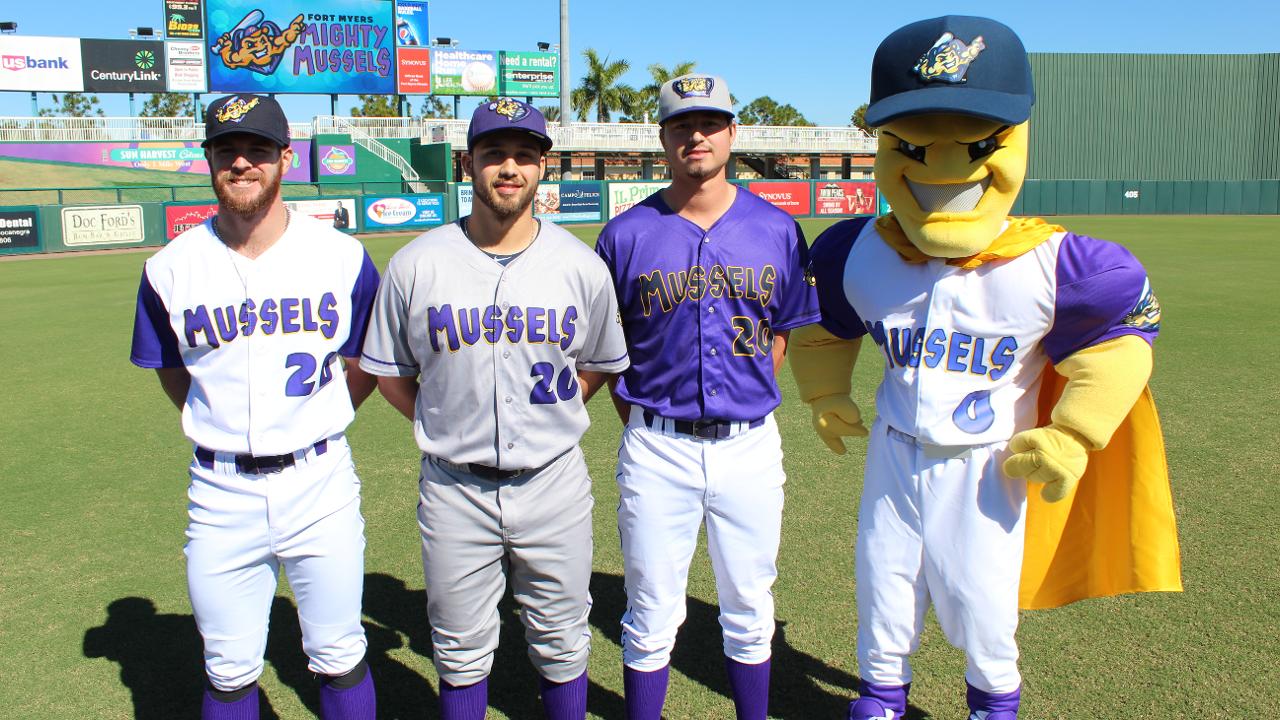 "This is an exciting moment in Southwest Florida's sports history," Kaufmann said. "Miracle fans are known around the Florida State League for their unwavering support, and we are confident they'll be eager to show off their 'Mighty Mussels' when the season begins in April."

Mussel Man, a hulk of an animated clam, will share mascot duties with Sway, the lovable, oversized palm tree that's been pumping up fans at Hammond Stadium since 2015. The Mighty Mussels will remain a Class-A Advanced Affiliate of the Minnesota Twins and play home games at CenturyLink Sports Complex.

The franchise began in 1926 as the Fort Myers Palms, a name that paid tribute to the city's stately royal palm trees paid for by Fort Myers' most famous winter resident, Thomas Edison. Fort Myers' official nickname is the City of Palms. Over the years, the baseball team changed locations and affiliations many times. Its names have included the Miami Hustlers, Miami Marlins, Miami Orioles and Miami Miracle before the team moved back to Fort Myers in 1992. It kept the Miracle name, though, which is believed to have originated from Miami's famed Miracle Mile shopping and business district in Coral Gables.

"The name 'Mighty Mussels' conveys a sense of strength and fortitude while being reflective of the natural environment that surrounds us, and Southwest Florida deserves a team name that establishes its own identity," said Bob Ohrablo, president of Zawyer Sports.

The team's new logo is a Mighty Mussel calling its shot with beach-inspired lettering. An alternate logo features the Mighty Mussel lifting a barbell with baseballs for weights.

Minor league baseball teams have long been known for their entertaining, sometimes wacky, gameday promotions. In recent years, though, that lightheartedness has extended to the team name. Newly adopted names like the Yard Goats, Blue Wahoos, Jumbo Shrimp, Trash Pandas, Chihuahuas and Flying Squirrels have replaced traditional animal-themed names or those mirroring their major league affiliates. In 2018 and 2019, the Miracle became the Fort Myers Groupers for one game each season, complete with new uniforms, hats and fish specials at the concession stand.

The rebranding process began in May when Jason Klein and Casey White, co-founders of the California-based marketing firm Brandiose, met with team ownership, Miracle fans, staff and community members to learn about the stories, history and personality of Fort Myers. Brandiose developed the logos, color combination, uniforms and mascot.

"Southwest Florida captures the imagination for all who visit or call this home," Klein said. "Our goal is to integrate Fort Myers folklore into the Mussels brand, and to create the most legendary entertainment experience in the region."

According to the Florida Fish and Wildlife Conservation, more than 60 species of mussels and clams live in Florida's freshwaters, and their filter-feeding activity helps cleanse water by removing bacteria, algae and organic material.

"We are confident the Mighty Mussels name will spark even more fan support, and we've even talked about a Flex Cam at the ballpark to capture fans flexing during the game," said Judd Loveland, who recently was promoted to general manager of the Mighty Mussels in charge of team operations and day-to-day stadium operations. "We can't wait for Opening Day on April 9."

Mighty Mussels merchandise, including T-shirts and hats, are available for purchase in the Team Store at Hammond Stadium, as well as online at MightyMussels.com.

About the Mighty Mussels

The Mighty Mussels, formerly the Fort Myers Miracle, are the Class-A Advanced Affiliate of the Minnesota Twins and have played home games at Hammond Stadium since 1992. The Miracle won the 2018 Florida State League Championship, the team's second title in five years, and won the first half title during the 2019 season. Notable alumni include Joe Mauer, Jose Berrios, Byron Buxton, Miguel Sano and Torii Hunter. Follow the Mighty Mussels online at MightyMussels.com and through its social media channels: Twitter, Instagram, Facebook and Snapchat. For questions or ticket information, please call the Mighty Mussels office at 239-768-4210.