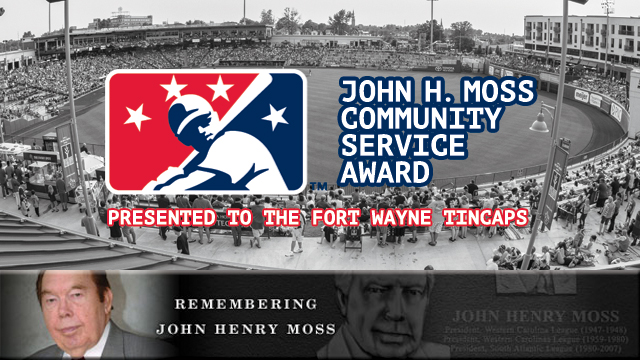 FORT WAYNE, Ind. -- Minor League Baseball has announced that the Fort Wayne TinCaps are the recipients of the 2015 John Henry Moss Community Service Award. The honor is presented annually to one of Minor League Baseball's 160 clubs for their outstanding ongoing commitment to charitable service as well as their support and leadership within the community and the baseball industry.

The TinCaps will receive this major Minor League Baseball award -- named after the former president of the Class A South Atlantic League -- at the Baseball Winter Meetings Banquet on Sunday, Dec. 6, at the Gaylord Opryland Resort & Convention Center in Nashville, Tenn.

"The TinCaps family is extremely honored to be selected as the national winner of the 2015 John Henry Moss Community Service Award," TinCaps President Mike Nutter said. "This is an amazing distinction for our organization."

From major initiatives like the Longe Optical TinCaps Reading Program presented by Longe Optical that reaches more than 117,000 kids in three states to charitable donations exceeding $500,000 and so much in between, the TinCaps are deeply connected to Fort Wayne and the surrounding region through service.

"The TinCaps commitment to their community and city is at a level that all teams should strive to reach," said Pat O'Conner, President & Chief Executive Officer of Minor League Baseball. "Through the Longe Optical TinCaps Reading Program, the Carson's Community Organization of the Game program, and their participation with more than 70 organizations and charities, the club exemplifies the characteristics of a community leader. On behalf of Minor League Baseball, I commend the team for their good work, and congratulate them on this honor."

While 2015 saw the continuation of many of the TinCaps' longstanding traditions of service like fundraising for local Little League organizations and hosting more than 1,300 military personnel, veterans, and their families at Military Appreciation Night, the past season also featured new programs. For example, the TinCaps instituted "Military Salutes" presented by OmniSource and Steel Dynamics prior to their 30 postgame fireworks shows in which active military members or veterans were recognized during an on-field tribute.

In a season in which the TinCaps won a Midwest League Eastern Division title, the most special moment of all came from a player who never even appeared in a game. On July 30, the team signed Jaymason Curry, a 14-year-old little leaguer from Fort Wayne, to a one-day contract. Jaymason, who had just finished months of cancer treatments, was given an official TinCaps uniform and was with the rest of the TinCaps players on the field during batting practice and in the clubhouse leading up the game. He filled in for manager Francisco Morales when it came time for the pregame meeting with the umpires at home plate and lined up with the team for the National Anthem. Jaymason then transitioned into the role of broadcaster for a couple innings on both TV and radio before enjoying the rest of the night with his family.

"While the TinCaps continued to win on the field in 2015, we know the greatest impact we can ever make is in our community. This is home for all of us," said Nutter, the 2015 Midwest League Executive of the Year. "We want to make Fort Wayne and our region a better place for everyone. We take great pride in working to enhance the quality of life in our region and being a part of the progress and momentum in the area."

TinCaps employees also embody the organization's mission to serve. All 30 members of the team's front office volunteer with multiple non-profit organizations around the area. On top of that, during their five-month stint in Fort Wayne this year, TinCaps players participated in more than 25 community outreach events.

For a comprehensive overview of the TinCaps' community service involvement, click here.

"We share this award with everyone in our community," Nutter said. "This is also a testament to our Major League partner, the San Diego Padres, and our incredible fans. They make all of our charitable efforts possible and successful."