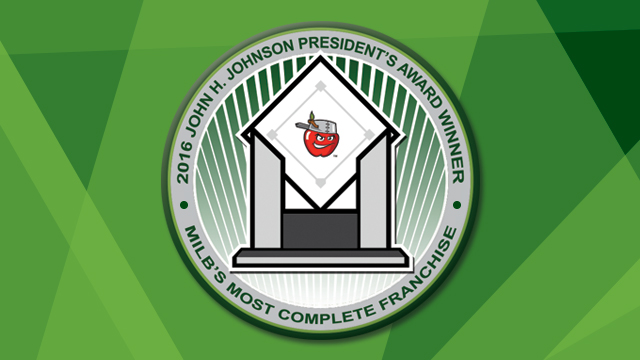 FORT WAYNE, Ind. - The Fort Wayne TinCaps, the Class A (Midwest League) affiliate of the San Diego Padres, are the recipients of Minor League Baseball's 2016 John H. Johnson President's Award. This is Minor League Baseball's top honor for organizational excellence, awarded each year to just one out of the 160 teams across all levels (Rookie Leagues to Triple-A).

The John H. Johnson President's Award has been bestowed annually by Minor League Baseball since 1974 to honor the "complete" baseball franchise. The award's criteria are based on contributions to baseball in the community, promotion of the baseball industry, contributions to league stability, and financial stability. Minor League Baseball senior officials select the winner. It's the first time the TinCaps have won this award, which will be presented at the Baseball Winter Meetings Banquet on Sunday, Dec. 4, in National Harbor, Maryland.

"We're honored to receive the John H. Johnson President's Award," TinCaps President Mike Nutter said. "This is a testament to the amazing fans, sponsors, media, and partners we have in our region. It's also recognition for our terrific staff that works incredibly hard. This is the top award we have in our industry and we're blessed to receive it."

During the 2016 season, the TinCaps welcomed 413,701 fans to Parkview Field, averaging 6,084 per opening. Both of those figures set franchise records in the ballpark's eighth year. Fort Wayne outdrew 12 of 30 Triple-A teams, 28 of 30 Double-A clubs, and ranked second out of 100 Single-A and Rookie organizations. On top of that, Parkview Field has hosted nearly 150,000 guests across 700-plus non-TinCaps events in the last year.

This past season at Parkview Field also marked the debut of The Summit presented by Tuthill, a one-of-a-kind group area atop The Tuthill 400 Club that overlooks center field. Additionally, the TinCaps upgraded their award-winning ballpark with the expansion of protective safety netting to the far ends of both dugouts and a new concourse surface. Since Parkview Field opened in 2009, the TinCaps have spent more than $6 million enhancing the ballpark.

This accolade for the TinCaps comes on the heels of having received Minor League Baseball's prestigious John H. Moss Community Service Award in 2015. The San José Giants are the only other team to have received more than one major award from Minor League Baseball since 2009. The TinCaps are the first club to garner a major MiLB award in consecutive years since the Nashville Sounds in 1980 and 1981. (Minor League Baseball has four "major" awards presented annually to clubs, including the Charles K. Murphy Patriot Award, which is new for 2016.)

The TinCaps continued their tradition of community service in 2016. For example, the TinCaps Reading Program presented by Longe Optical grew to encompass 296 schools and 90 libraries around the region, reaching more than 113,000 students. Meanwhile, other initiatives included showcasing a different local non-profit organization at each home game, donating a value of almost $700,000 to 600 organizations and charities through the TinCaps CARE program, helping to restore a local little league field, and supporting our military. Members of the TinCaps' staff also volunteer with 70 community organizations.

"It's been an amazing eight-year run at Parkview Field in Downtown Fort Wayne," Nutter said. "2016 featured our highest attendance ever and our biggest impact in the community. We're grateful to our corporate partners, season-ticket holders, and supporters that work with us and allow us to provide family-friendly entertainment. We share this award with the hundreds of part-time staff members who choose to work for our organization and provide outstanding customer service.

"We also thank Midwest League President Dick Nussbaum and League Administrator Holly Voss for all of their support," Nutter added. "I wish my great friend George Spelius could've been here to see this because I had the honor of working with him for 20-plus years. In addition, we share this with the other 15 Midwest League teams who do such an admirable job in their communities. Finally, we receive tremendous support from our owner, Jason Freier. He's a first-class person with an incredible vision who truly cares about our industry and the communities we call home. We wouldn't receive this award without his leadership."

"It is a tremendous privilege for the TinCaps to receive this award. It is a tribute to the extraordinary fans of Fort Wayne as well as to the talent and hard work of our staff," said Freier, TinCaps Owner and CEO of Hardball Capital. "To have well over a half-million fans come through Parkview Field year after year, in a metropolitan area of just over 400,000 demonstrates the support the TinCaps and Parkview Field receive. The secret to that success is our staff, which has had tremendous continuity and is filled with fantastic people who do great things not only at the ballpark, but out in the community every day.

"The City of Fort Wayne and Parkview Health took a chance and invested alongside us almost 10 years ago in creating Parkview Field and Harrison Square and the results have been spectacular. Downtown Fort Wayne has evolved into a vibrant and dynamic live, work, play environment and we know more good things are to come. We appreciate the trust that the City, Parkview, and their leaders have shown in the team and partnership we've shared over the past decade."

The John H. Johnson President's Award is named after the late former president of the National Association, which, because of his leadership, grew into what is now known as Minor League Baseball.