On the Road: Welcome to HODGETOWN

An exploration of the Amarillo Sod Poodles' new home 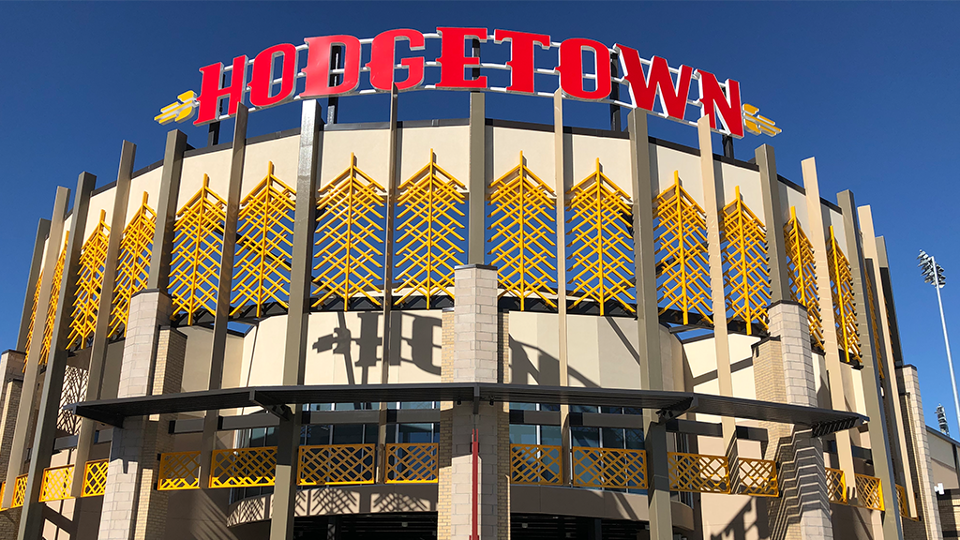 It took 37 years, but Amarillo is once again home to a Double-A Padres affiliate playing in the Texas League.

Tweet from @bensbiz: Before the @sodpoodles, Amarillo hosted a Texas League team called the Gold Sox. The Gold Sox played at Potter County Memorial Stadium; their last season was 1982. This is what the ballpark looks like now. pic.twitter.com/mkFeIgmjWn

Potter County Memorial Stadium (currently utilized by a private high school baseball team) is worlds removed from HODGETOWN, the new all-caps downtown home of the Sod Poodles. The Sod Poodles previously existed in the Texas League as the San Antonio Missions, who are now a Pacific Coast League entity. The PCL Missions replaced the Colorado Springs Sky Sox; that city now hosts a Pioneer League team called the Rocky Mountain Vibes (who relocated from Helena). All of the teams involved in this admittedly confusing game of Minor League musical chairs -- Amarillo, San Antonio and Rocky Mountain -- are owned by the Elmore Sports Group. Tony Ensor, Sod Poodles president and general manager, relocated to Amarillo after 14 years in the same position with the Sky Sox.

"Sod Poodle" is a slang term for a prairie dog, a common animal in the Amarillo area. But just because prairie dogs have always been prevalent, that doesn't mean that Amarilloans were familiar with the term. The team admits as much. Director of public relations Shane Philips, who also relocated to Amarillo after previously working with the Sky Sox, discovered this obscure colloquialism while doing a Google search deep dive during a staff brainstorming session with Jason Klein and Casey White of the design firm Brandiose.

"I was digging. It wasn't a surface term," said Philips, dropping some not-so-subtle prairie dog puns.

Amarillo's name-the-team contest had received thousands of submissions. "Prairie Dogs" -- or some variant thereof -- was a popular suggestion.

"We needed to do something original with it," Ensor said. "When Shane said, 'Sod Poodles' I looked at the Brandiose guys. 'You guys feel what I just felt? Did you guys feel that?' It all became Sod Poodles in that moment."

Ensor then dropped some prairie dog puns of his own.

To verify the authenticity of "Sod Poodles" as a slang term, Amarillo's front office consulted with prairie dog expert John Hoogland, who has spent 45 years studying the animals. He confirmed that they indeed had been occasionally referred to by that name, and that was enough for the team to forge ahead. Sod Poodles was announced as a name-the-team finalist, alongside Bronc Busters, Jerky, Long Hailers and Boot Scooters.

"There was no [fan] engagement at all with the other names," said Ensor. "It was all Sod Poodles."

Sod Poodles was immediately engaging, but it wasn't immediately embraced. Many locals felt condescended to by a group of outsiders, griping that they hadn't ever heard prairie dogs referred to in such fashion. But there was a genuine fascination mixed in with the criticism, leading to the inevitability of its selection. By the time the name was announced in November, Sod Poodles were an Amarillo phenomenon. A local bakery was selling Sod Poodle cookies and various stores were peddling unofficial merchandise. Additionally, Sod Poodles had been referenced in everything from a lawyer's television commercials, to Chick-Fil-A roadside signage, to the title of a church sermon ("Sod Poodles and Mind Boggles"). The team even had a theme song at the ready, courtesy of songwriter (and bootmaker) Carson Leverett, whose "Sod Poodles Anthem" was eventually recorded with a full band in Nashville and is now played during the seventh inning of every game.

These days, it's a fairly common Minor League branding story: incredulousness turning into acceptance turning into love. By the time Opening Night 2019 rolled around, Amarilloans were fully ready to embrace the Sod Poodles. Amarillo has a population of approximately 200,000, and the team has already surpassed the 200,000 mark in attendance (averaging 6,105 fans a game in an approximately 7,000 capacity ballpark). This writer attended games on June 12, 13 and 14, during which over 20,000 fans passed through the gates. The team store was packed during the entirety of every game, indicative of the extent to which the Sod Poodles have won over Amarillo's hearts and minds.

"[HODGETOWN] makes it feel like you're in a city, not Amarillo," said local radio journalist and podcast host Tom Young, echoing a common sentiment. "It's different than anything we've ever had before. It's amazing."

Prairie dog terms abound at HODGETOWN. The concourse suites are called "Coterie Suites," as a coterie is the term for a group of prairie dogs. The Sod Poodles Sentinel newsletter references the member of the coterie whose job is to alert others to potential danger. The ballpark's name itself is in part a prairie dog reference, as the series of interconnected underground tunnels and rooms in which they live is called a town. The "HODGE" portion pays homage to Jerry Hodge, a local business leader who rallied other prominent locals to create the economic conditions necessary for a Double-A team to establish itself. The team has 10 "founding partners," and 18 of its 20 suites were leased on a 10-year-commitment.

"Hodge called all the local business leaders," said Ensor. "They had civic pride. They wanted something special for Amarillo and created this dream we're all living."

As for why HODGETOWN is written in all-caps, Philips said the team simply wanted to put an "exclamation mark" on the name (not, literally, as its name is not HODGETOWN!). Mascot RUCKUS -- a prairie dog, natch -- similarly gets the uppercase treatment. The ballpark itself is located on S. Buchanan Street, a busy one-way thoroughfare in downtown Amarillo. The land on which it's located used to be a Coca-Cola bottling plant, and the dilapidated warehouse-style buildings on the outfield side of the ballpark are prominent reminders of this more industrial past. Amarillo City Hall is located on the third base side of the ballpark, close enough to get dinged by wayward foul balls.

Some of the buildings surrounding HODGETOWN, including Amarillo City Hall (lower left).

HODGETOWN's home plate entrance sits beneath a soaring, art deco-inspired facade, lending a sense of grandeur to a ballpark that is otherwise fairly pared down and intimate. As Sod Poodles director of marketing Tess Bloom put it, it's a "small ballpark for a small market." It boasts a 360-degree concourse and open space in which to roam, particularly in the large, grassy Kids' Zone located in right field. Other prominent features include the Fairly Group Club Level bar and lounge area and the 352 Bar in left field. This latter establishment is located just 352 feet from home plate, leading to the possibility of catching (or getting hit by) a home run ball while ordering a beer.

The 352 bar in left field is located that many feet from home plate.

The Dugout Suites are also of note, as access to them is gained via the same walkway that the players use to get to their respective dugouts.

Tweet from @bensbiz: .@sodpoodles Dugout Suites are close. Close to the action. The action is close. pic.twitter.com/EooMH2Qk8u

While it doesn't affect the fan experience, one notable drawback of the facility is the location of the press box. Broadcaster Sam Levitt -- who recently saw his first prairie dog -- calls games from a booth with a straight-ahead view of first base. Meanwhile, in the adjacent production room, heavily mustachioed PA announcer Ed Montana (a country musician who wrote a song about Amarillo's name-the-team finalists) introduces batters in a wry, quintessentially Texas drawl.

Those looking for out-of-the-ordinary concession items should seek out the Hot Diggity Dog cart, which includes the bacon-wrapped Amarillo Dog (topped with pulled pork, barbecue sauce and cheese) and the Sunrise Dog (a sausage topped with bacon, cheese, fried egg and country gravy). Also of note is the HTeaO sweet tea stand (boasting 12 flavors) and a Dickey's barbecue location in left field, adjacent to the 352 Bar.

Ensor, meanwhile, is quick to point out features of the ballpark that might not be readily apparent to the casual observer. These include a ribbon scoreboard located directly above the left field wall and non-tiered seating in the suite areas.

"I think that's one of the coolest aspects of the ballpark," he said. "It's like it's one big picnic up there."

HODGETOWN's intimate neighborhood feel, combined with the robust fan enthusiasm, has resulted in one of the best ballpark atmospheres in all of Minor League Baseball. The Sod Poodles are still young, but all involved are hoping this HODGETOWN honeymoon period won't end anytime soon.

"I can't say it's been anything other than magical," said Ensor.