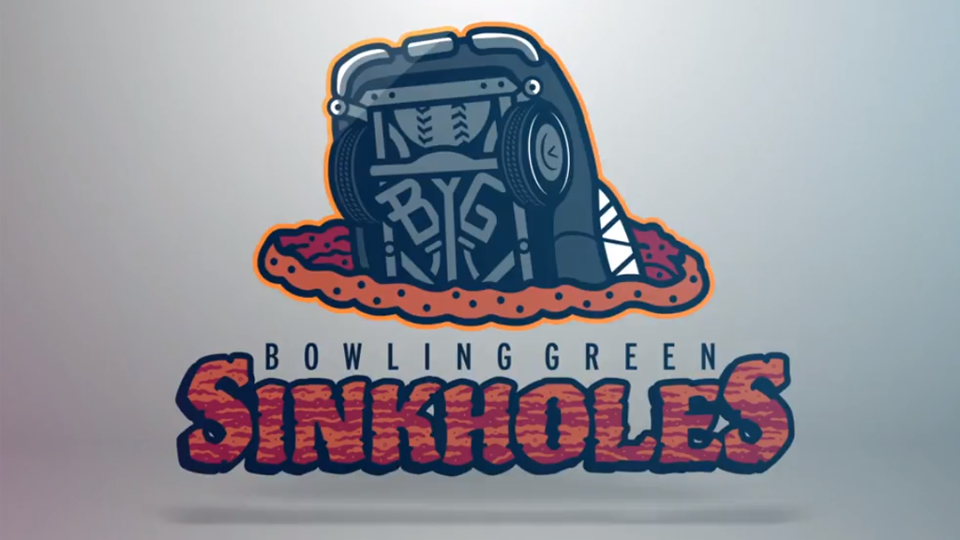 The Bowling Green Hot Rods will play as the Sinkholes on Friday, commemorating a 2014 incident at the National Corvette Museum.

On Feb. 12, 2014, Bowling Green's National Corvette Museum received global attention due to a happenstance that was equal parts disturbing, amusing and inexplicable. A 40-foot sinkhole opened under the museum and, as a result, eight classic cars took an unscheduled plunge into the abyss.

The tragic fate of that Corvette octet, plus time, equals a one-of-a-kind Minor League Baseball theme jersey. On Friday, the Bowling Green Hot Rods, Class A affiliate of the Tampa Bay Rays, are playing their 2019 home season finale as the Sinkholes.

In Recognition of the 5th Anniversary of the global event that shook Bowling Green when 8 classic corvettes fell into a sinkhole beneath the national corvette museum, the Hot Rods would like to announce on August 30th we will transform into the Bowling Green Sinkholes. pic.twitter.com/0P132xP00i

Since 1981, Corvettes have been produced exclusively at an assembly plant in Bowling Green. The National Corvette Museum opened in 1994 and the Hot Rods -- named for the region's connection to the automotive industry -- began play in 2009 after relocating from Columbus, Georgia. General manager Eric Leach said the idea to play as the Sinkholes came about in the immediate wake of the 2014 car swallowing.

"When it first happened, the Corvette Museum was in shock," he said. "We talked with them [in 2014], but it was still too raw. It wasn't something that they wanted to joke about. But through the years, in a strange sort of way, it became a godsend. It brought so much notoriety and press. They embraced it. Now they have a whole exhibit describing the sinkhole and how it impacted everything. There are outlines of where it was in the rebuilt building."

Indeed, the National Corvette Museum has been able to capitalize on the sinkhole. Despite dropping some 30 feet into the ground, all eight cars were recovered and three have been restored. A "Corvette Cave-In" exhibition opened in 2016 and a 360-degree virtual cave tour was unveiled in February. The Hot Rods' "Sinkholes Night" commemorates a pair of anniversaries -- the fifth anniversary of the sinkhole and the 25th anniversary of the museum itself. Bowling Green is hosting the National Corvette Caravan from Wednesday-Saturday, and the city will be flooded with car enthusiasts from all over the globe. Quite a few likely will spend Friday evening at Bowling Green Ballpark.

"Every hotel room within a 45-minute radius is sold out. The low estimate is that there will be 10,000-12,000 Corvette owners descending on Bowling Green," Leach said. "We normally wouldn't do this kind of [promotion] on the final game of the season, but we have all these Corvette owners in town, so we're selling different ticket packages and we have picnic options."

The Sinkholes logo set was designed by Brandon Lamarche, a former Hot Rods employee whose father, Jeff, is the plant manager at Bowling Green's Corvette assembly plant. The primary logo features a submerged car -- presumably a Corvette -- with "BG" and part of a baseball visible within the undercarriage. The jerseys are two-thirds "submerged" as well, depicting layers of buried automobiles. Leach noted that old Hot Rods logos are buried in the dirt along with the cars, such as those from the team's inaugural 2009 season as well as the franchise's previous Columbus Catfish incarnation. The sleeve patch features a glasses-wearing mole, decked out in a construction vest and brandishing a baseball bat-like broken axle.

While the 2014 incident at the museum was a particularly notable example, sinkholes are a fact of life in the greater Bowling Green area.

"It's part of the topographical makeup of Bowling Green and the region," Leach said. "Mammoth Cave is 35 minutes up the road, the largest cave system in America. It's a serious thing, having the ability for these sinkholes to open. Most are relatively small. Last week a cow fell into one and it had to be rescued out of it."

While trapped cows won't feature in Friday's game, the Hot Rods plan to have a variety of sinkhole-themed elements.

"We have some skits planned with our mascot, where he accidentally falls into a hole," Leach said. "There'll be some classic kiddie car races. And in our traditional fashion, there'll be some food parlays. Lots of teams have a donut burger, but we have the Sinkhole Burger with a Matchbox hot rod car stuck inside it."

It all adds up to the latest in a long line of creative alternate Hot Rods identies, two of which have won "Promo of the Year" MiLBY awards. In 2009, the Hot Rods staged Minor League baseball's first "What Could've Been Night" when they suited up as the Cave Shrimp. Seven years later, they debuted their moonshine-centric "Bootleggers" identity, which has become a recurring Thursday promotion.

"That's part of the culture here, from Cave Shrimp to Bootleggers to, now, Sinkholes," Leach said. "It engages the staff, engages the community and gets national publicity. It's fun. It's who we are and what we do."