A mouth-watering recap of food-based names throughout Minors 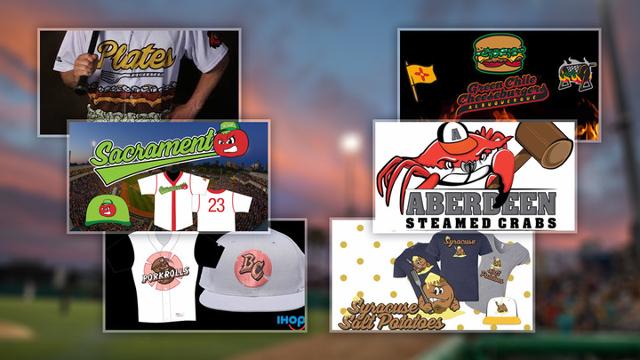 You are what you eat.

The 2017 season saw the continued growth of a promotional craze that shows no signs of abating: Minor League teams adopting temporary identities based on food items. This trend began with the Lehigh Valley IronPigs' Bacon uniforms in 2014, and the next season, the Fresno Grizzlies took the idea further by announcing their now regularly recurring Tacos moniker.

The recently concluded Minor League campaign saw a wide variety of food-based themes and names, with some teams expanding on previous promotions and others jumping into the fray for the first time.

The most important meal of the day

For the third consecutive season, the Mud Hens hosted an Eggs and Bacon series against the IronPigs. Lehigh Valley brought the bacon, of course, while Toledo suited up in egg-themed duds that befit an egg-laying species. The Eggs got shelled in the first game of the April 29 doubleheader but didn't crack under pressure and won the two remaining games of the series as bacon proved to be more fizzle than sizzle.

Brunch has proven popular in a lot of places, including Richmond. Capitalizing on this beloved meal option, the Flying Squirrels played 12:05 p.m. Brunch & Baseball games. During these contests, the team wore waffle-themed uniforms that allowed them to move syrup-titiously around the diamond.

Stockton, California, is the "Asparagus Capital of the World." The Ports, seeking to capitalize on this notable fact, unveiled an asparagus-themed alternate logo in 2012. This eventually led to the team wearing full-blown asparagus jerseys; 2017's iteration featured the vegetable in full stalk-to-tip glory.

Meanwhile, a little further north, the Sacramento River Cats played their first-ever game as the Tomatoes. Their transformation into this esteemed vegetable (fruit, if you want to get technical) occurred during July 29's Farm to Fork celebration of local agriculture.

On Aug. 5 and again on Labor Day, the Syracuse Chiefs became the Salt Potatoes. This upstate New York specialty is simple -- boil potatoes and salt, dip in butter -- but much beloved. Salt potatoes are but one potential ingredient in the endlessly adaptable Rochester, New York specialty known as the Garbage Plate. The Red Wings, declining to incorporate "garbage" into their name, played a game as the Plates on Aug. 10. In 2018, the International League club will utilize this moniker during all Thursday home games.

On June 16, the Albuquerque Isotopes saluted New Mexican cuisine by playing as the Green Chile Cheeseburgers. Fresno, the evening's opponent, commemorated the occasion by playing their first Tacos road game.

Tweet from @ABQTopes: Have you voted for the biggest food fight in baseball history as the #MiLBY Award Winner for Promo of the Year? 🍔🌮https://t.co/fUwxPPDGch pic.twitter.com/UrBSoPMfaX

In 2016, the Brooklyn Cyclones became the Coney Island Franks. This season they honored another New York City culinary staple by becoming the Slices. The Aberdeen IronBirds, also of the New York-Penn League, spent an evening as the Steamed Crabs.

In Lakewood, the BlueClaws took their long-running admiration of pork roll to new levels, by -- you guessed it -- playing a game as the Pork Rolls. New Jersey loved this new jersey:

For dessert, one only needed to advance two levels up from Lakewood within the Philadelphia system. On Aug. 7, the Reading Fightin Phils suited up as the Whoopie Pies.

As previously mentioned, Lehigh Valley and Fresno deserve the credit (or blame) for kick-starting the temporary food-based team name trend. The two teams have long "feuded" with one another on Twitter, regarding who is more innovative and that eventually spilled onto the field. The teams jointly announced a Bacon vs. Tacos competition this past March in which fans were asked to vote for one or the other. The IronPigs won, and thus the Grizzlies had to wear bacon caps during their game on June 22. This marked the first time in professional baseball history that an entire team wore another team's cap on the field.

Tweet from @IronPigs: We would like to wish the @FresnoGrizzlies good luck tonight, no matter the outcome you're winners to us with those sweet hats!#TeamBacon pic.twitter.com/2vKpC5ryc2

Meanwhile, the two teams continued to break food-related boundaries independently of one another. The IronPigs staged their second annual "Salute to Philadelphia" by playing as the cheesesteak-themed Whiz Kids. The Grizzlies added another dimension to their already-robust "Tacos" identity by wearing Oreo Taco uniforms on Aug. 24.

You know what goes hand in hand with food? Drink. For the second consecutive season, Asheville wore sudsy duds as the Beer City Tourists. Looking for something a little (or a lot) harder? The Bowling Green Hot Rods once again saluted their region's history of illicit whiskey production with Bootleggers Night. Somewhat similarly, the Peoria Chiefs took the field as the Distillers.

All day, every day

For the 14th consecutive season, Montgomery's Minor League Baseball team played each and every one of its games as the Biscuits.