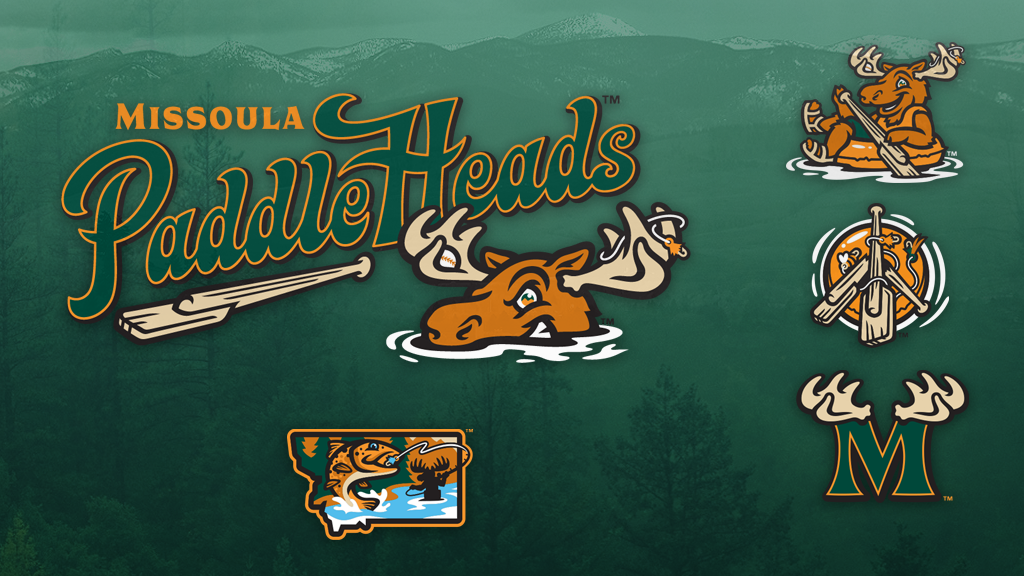 On Monday, after two decades as the Osprey, Missoula's Pioneer League team changed its name to the PaddleHeads.

The moose was let loose.

After 21 seasons as the Osprey, Missoula's Pioneer League team announced a name change at a team rebranding event held Monday morning at the Missoula Children's Theater.

The Osprey are now the Missoula PaddleHeads, Rookie Advanced affiliate of the Arizona Diamondbacks.

The PaddleHeads' name and logos, buttressed by vivid orange and green hues, have a variety of connotations. Moose antlers are also known as paddles, making a male moose a literal "paddle head." Paddle also serves as a reference to kayaking, canoeing and other river-based activities popular in Missoula and its surrounding west Montana locales.

The Clark Fork, Blackfoot and Bitterroot rivers all run through Missoula; the novella A River Runs Through It, adapted into a movie in 1992, was set in the city. PaddleHeads pays homage to this freshwater and wildlife legacy. The primary logo features a baseball bat paddle as well as a glowering, partially submerged moose. A baseball is nestled within one of its antlers, while fishing line is wrapped around the other.

The name change comes during a time of transition for Missoula's sole professional sports team, which was established as the Osprey in 1999 after relocating from Lethbridge, Alberta. Mike and Judy Ellis, owners of the franchise since 1993, sold it in October 2018 to Peter Davis and Susan Crampton Davis of Big Sky Professional Baseball. Matt Ellis, Mike and Judy's son, has worked for the team since its inception and continues to serve as the team's executive vice president.

"We'd had the same logo since 1999, and this is coming from someone who has to do creative content: the center of that logo is not where you think the center is. It was a real pain for graphic design," Rush said. "The goal was to find something that really represents what it means to be from Missoula. But we wanted to make sure it was a decision that the entire team was OK with. Matt Ellis, he and his parents moved the team here in 1999 and developed the Osprey branding. It was a special thing for him, so the fact that he got on board and is excited as he is says a lot about what we've been able to come up with." The Osprey name had a special significance, as Missoula was the only professional sports team named after a species that lives at the ballpark in its natural habitat. A specially constructed osprey nest, sitting atop a tall man-made platform and monitored by University of Montana researchers, is located just beyond the right-center field fence at the team's home of Ogren Park at Allegiance Field. The osprey families that live in the nest feed on trout from the Clark Fork River, which runs just behind the ballpark.

The team developed its new PaddleHeads identity in conjunction with Jason Klein and Casey White of Brandiose, a San Diego-based logo design company that has worked with dozens of Minor League teams over the past 15 years.

"Jason and Casey flew out and then we held focus groups with a lot of people, both baseball fans and not," Rush said. "We had fans submit ideas and ended up with more than 600 over the course of a month, and 400 of them were different. We had about a half-dozen variations of moose and one that referenced paddles as antlers.

"During a brainstorming session with Jason and Casey, we threw PaddleHeads out there. It's a double entendre. There's the moose antlers but also the Missoula lifestyle -- the kayaking, fishing, paddleboarding that are all happening outside the stadium. Paddles is one of those things. We didn't make it up, but it's still obscure enough that we can have that brand. That's one of the toughest things about the whole process. Everything and its mother is already trademarked."

Pick up some PaddleHeads gear »

Referencing previous Brandiose clients, he continued, "They definitely believed they had to create a brand that couldn't be ignored, that could hang alongside the [El Paso] Chihuahuas, the [Jacksonville] Jumbo Shrimp, the [Hartford] Yard Goats. That was the basic thrust -- how to create something like that for a Pioneer League franchise. Before the [Rocky Mountain] Vibes, it hadn't been done since the Casper Ghosts, a Pioneer League team jumping to national celebrity. Now the Missoula PaddleHeads have thrown themselves into the ring." Rush and Klein feel this potential for national prominence is a result of the variety and vibrancy of the logos. One mark shows the moose, clad in Birkenstocks, lounging in an inner tube while gripping his baseball bat paddle. (Klein said the bat-paddle will be "an icon throughout the brand.") Another logo, in the shape of Montana, depicts the moose in the background as he hooks a trout. There's also an antler-topped "M" and, finally, a mark that incorporates several of the above elements into a ramshackle peace sign.

"The peace sign is one of my favorite things about all of the marks," Rush said. "Missoula has a surprisingly liberal, hippie culture -- outgoing and open-minded people. A university town, a blue circle in a red state. There's a mountain to the north of downtown that had a peace sign on the hill."

Even more subtle is an Easter egg in the primary logo, contained within the submerged moose.

"The eye of the mascot, if you look closely, you can see [Missoula's] Mount Sentinel and Mount Jumbo, with the moon and the sun over it," Rush said. "From a color standpoint, everything is bright," Klein added. "The Missoula color palette, when we visited it was steel blue, Texas orange, Big Sky colors, real rough and worn over time. 'OK, let's hang out in that color universe and punch it up.' We saw great photos of rivers in summertime that were electric green, and the rust orange color of the buildings moved its way into the moose color.

"And a little bit of logo fanatic trivia, this orange was the orange that the Nashville Sounds originally went with on their launch [prior to moving into a new ballpark in 2015]. For a brief time, Nashville had this orange, but they abandoned it. We can safely say that Missoula is the only team with this electric neon hunter orange."

Monday's unveiling marked the PaddleHeads' official introduction to the Minor League Baseball landscape. Rush is optimistic about what the future holds.

"What we wanted out of this, and what I think we were able to accomplish, is to create a brand and image that speaks to the culture and people of Missoula and west Montana," he said. "We are a community that is frankly unlike anywhere else in the world. We're lucky to be here and wanted something for our community to be proud of."