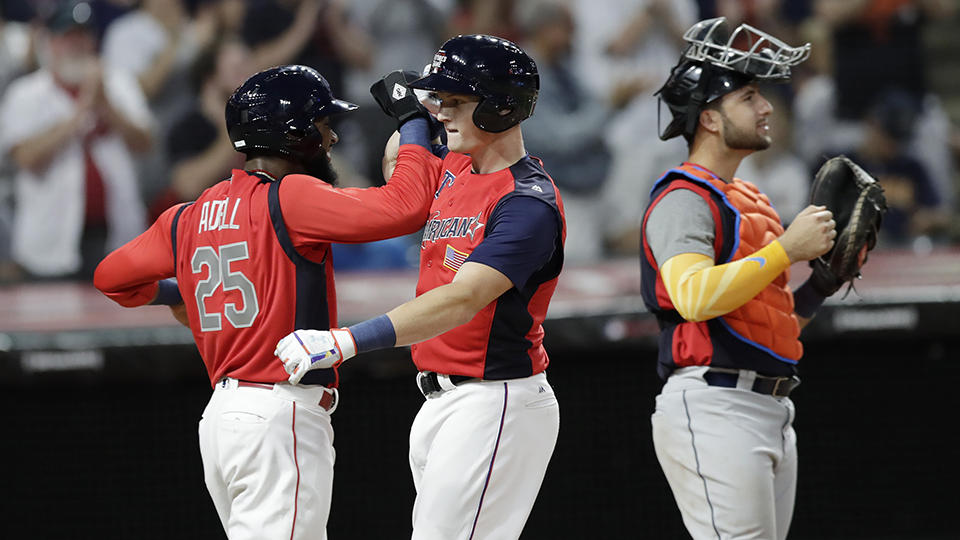 And yet after the final out of Sunday's newly formatted prospect showcase, the Futures Game was none of those things -- in a delightfully entertaining way.

The American League rallied for a 2-2 after eight innings for the first draw in the 21st edition of the All-Star Futures Game before an announced crowd of 34,386 at Progressive Field. It was the lowest-scoring contest since the game was first held in 1999 at Fenway Park, even though it technically went one extra frame. Major League Baseball announced on June 11 that the game would move from nine innings to seven while switching from a format pitting players from the United States against those from around the world to a typical AL vs. NL All-Star version.

"Wind," top Reds prospect Taylor Trammell said when asked what was the difference between last year's Futures Game and this year's, which a 15 mph breeze blowing in from center field. "And just baseball."

Yet it was one home run that decided this Futures Game in its own unique way.

Rangers No. 21 prospect Sam Huff was given the Larry Doby Award as Futures Game MVP for his two-run blast to left field -- the game's only roundtripper -- off Rockies left-hander Ben Bowden in the seventh inning. The ball traveled an estimated 418 feet, according to Statcast. No other ball went longer than 341.

"When I saw it go, my heart started going and in my head I just started smiling," Huff said. "It wasn't something I didn't think I would ever experience or do in my life."

The 6-foot-4, 230-pound slugger was able to enter Sunday's game due to a last-minute decision by AL manager Jim Thome and his staff. Considering Huff has hit 21 homers in 80 games between Class A Hickory and Class A Advanced Down East this season, it was important to get his bat in the lineup in some way, but with Jake Rogers and Ronaldo Hernandez also on the roster at his preferred position behind the plate, Huff was asked to move to first base, which he did in the fifth inning by taking over for Evan White. Two innings later, he went yard.

"They came to me probably 15 minutes before the game started," Huff said. "I thought, 'OK, I'll try first base out.' It was a good decision. It was fun over there. I normally don't even play over there. ... I used [Pirates prospect] Will Craig's glove, actually. He was generous enough to do that, so shout out to Will Crag for that one."

After Huff's long ball, the AL had chances to walk off in the seventh when Tigers No. 4 prospect Isaac Paredes doubled to right-center and ninth-ranked Red Sox prospect Jarren Duran singled to left to put runners on the corners with one out and chase Bowden. Enter Luis Patino, who became the long arm out of the bullpen that neither team thought it would need given the abbreviated format. The Padres' No. 3 prospect got Hernandez swinging on an off-speed pitch and top Twins prospect Royce Lewis the same way on a 98 mph heater to end the seventh.

Under the new format, the teams played just one extra inning, using Minor League rules that place an automatic runner at second base to begin the frame. After the NL couldn't plate top Braves prospect Cristian Pache from second in the top of the eighth, the weight again fell on Patiño's shoulders in the bottom of the frame with a plus-plus runner at second in Lewis. The hard-throwing 19-year-old righty responded again by getting Jorge Mateo and Luis Robert to fly to center. He closed out the tie by getting top Angels prospect Jo Adell to swing and miss for strike three on a 98 mph fastball up in the zone.

"I think we just mixed his stuff up," top Giants prospect and NL catcher Joey Bart said of Patiño. "He obviously has an electric fastball. We were throwing fastballs in, changeups in, sliders away. He had these guys guessing. When you're throwing a heater at 98 up and in, good luck. It's what worked for him. ... We couldn't have drawn it up any better."

Despite the awkward ending, the game had other standout moments. The biggest came in the fourth after the NL finally opened the scoring. Trammell followed singles by Kieboom and top Phillies prospect Alec Bohm with a base hit to score the game's first run off Tigers right-hander Matt Manning. After Craig was hit by a pitch and Dylan Carlson singled, Trammell got to thinking he could open up the game even more.

With Royals left-hander Kris Bubic on the mound and Dodgers No. 2 prospect Gavin Lux at the plate with two outs, Trammell attempted a straight steal of home. Bubic caught the move quick enough to fire home to Rogers, who tagged Trammell for what plate umpire Jose Navas -- who calls games in the Southern League -- called the inning's final out.

"I just wanted to make something happen, give us a nice little insurance run," Trammell said. "Gavin was up. He's a left-handed hitter, so I thought I could get a good clean slide in. [Coach Omar Vizquel] said, 'If you want to do it, you do it. Just see one pitch and you can go after that.' I saw one and knew I could get it. So I walked off, walked off, put my head down, he came set and then I went. It stinks."

Replay, which is used in the Major Leagues but not in the Futures Game, showed that Trammell may have gotten his hand in before the tag for what would have been the decisive run. But even with the way the game ended, the 2018 Futures Game MVP wasn't about to dwell on the highlight that could have been.

"The best part is I heard the crowd's reaction," he said. "It doesn't make it as bad. But I've seen that umpire multiple times. He's been consistent all year. The fact that he comes out every day knowing he's probably going to get yelled at for making a good call or even a bad call ... it's just the name of the game. I know that; he knows that. The box score can't change. I look at it that and think it's OK. Would I have loved it? Would it have given us a win? Yeah. But you can't change it."

The game also turned into a pitcher's showcase, with 16 of 18 hurlers not giving up a run. (Manning and Bowden were the only ones who did.) In terms of raw stuff, perhaps no one stood out more than Blue Jays right-hander Nate Pearson. MLB.com's No. 41 overall prospect threw four pitches at 101 mph, showing off the 80-grade fastball for which he's popular. But he also showcased a high-80s slider that kept Lux, Pache and Bart off-balance for a 1-2-3 inning.

"For me, I was trying to show something other than a fastball. Trying to get three quick outs, which I did," Pearson said. "I only threw fastball, slider, but it worked. ... It builds confidence in the slider. It's my second-best pitch and I have a lot of confidence in that."

There were other standouts. Adell singled, walked twice and made a nice diving snag in right field to showcase his full array of tools. Right-handers Sixto Sanchez of the Marlins and Dustin May of the Dodgers both topped 98 mph on the radar gun for the NL. Deivi Garcia of the Yankees and Ian Anderson of the Braves had the same line with one strikeout and 14 pitches (10 strikes) in scoreless first innings as the AL and NL starters, respectively.

But for all the individual performances on Sunday, it was difficult to overlook how this edition of the Futures Game met the same fate as the 2002 Major League All-Star Game in Milwaukee. Then again, baseball happens.

"We wanted to win," Pearson said. "We were hoping to walk it off in the bottom of the seventh. Obviously, we didn't. Nobody wants to tie. We wanted to get all our pitchers in. Thankfully, we went to extras so we could get in one more. I think only one didn't throw. You hate to see that. But I was looking forward to winning. It is what it is."

"We didn't know if we were even supposed to go out on the field," Trammell said of the situation after the eighth inning. "Do we shake hands or leave? But we have respect for guys on the AL side. It was a hard-fought game today. I had as much fun as possible."