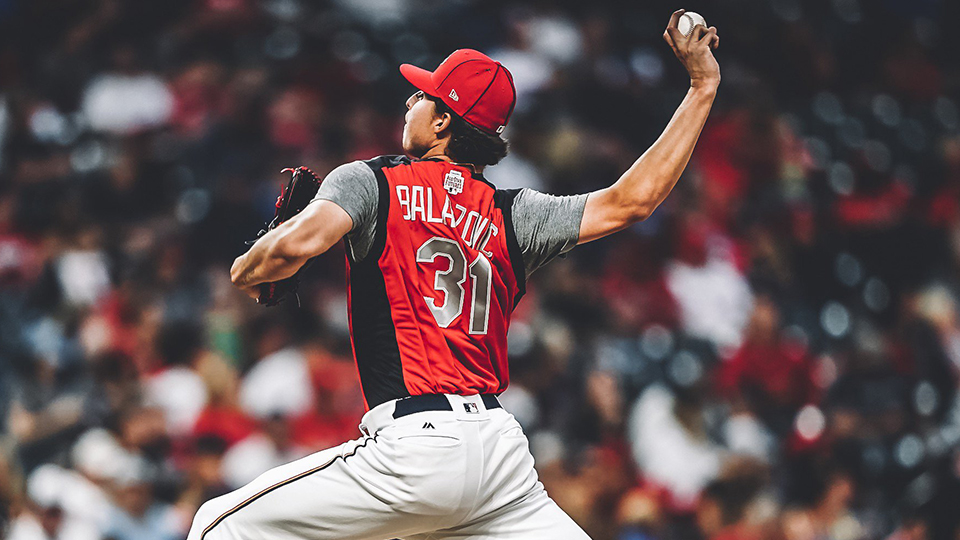 Jordan Balazovic has struck out 33.8 percent of the batters he's faced across two levels this season. (Minnesota Twins)

CLEVELAND -- In another year, Jordan Balazovic would have been defending the World. However, the All-Star Futures Game changed formats this year, going from a U.S. vs. The World matchup to one between American and National leagues -- mimicking the actual All-Star Game. In other words, this Canadian will wear a jersey with "American" emblazoned across his chest.

While it may seem a lost opportunity to represent his home and native land, Balazovic isn't about to get lost in the details.

"It doesn't really matter," he said. "I've played with guys from all over the world. Nothing different. ... I don't mind. It would have been cool to play for the World, but also just being here is awesome. Can't complain."

Maybe that's because the 20-year-old right-hander -- MLB.com's No. 100 overall prospect -- has had one of the most winding roads to the Futures Game at Progressive Field.

For starters, Balazovic was taken in the fifth round of the 2016 Draft out of St. Martin Secondary School in the Toronto suburb of Mississauga. That makes him the fourth-lowest drafted player in the 2019 showcase, ahead of only seven-rounders Sam Huff (Rangers) and Jarren Duran (Red Sox) and Indians outfielder Daniel Johnson, who was taken one pick after Balazovic. By comparison, 26 of the 50 players on the AL and NL rosters were taken in the first or competitive balance rounds.

Given his cold-weather background and raw nature coming from the prep ranks, Balazovic was put on the slow road through the Minnesota system, playing in the complex-level Gulf Coast League in both 2016 and 2017. After posting a 4.91 ERA with 29 strikeouts over 40 1/3 innings in that second GCL campaign, he was held back in extended spring training last year before joining Class A Cedar Rapids in June. He finished with a 3.94 ERA over 61 2/3 frames but showed signs of promise with a 30.7 percent strikeout rate and 4.3 K/BB ratio.

That promise has led to a true breakout in 2019. The Twins returned the righty to the Midwest League, where he made his first true Opening Day roster and saw him dominate with a 2.18 ERA and 33 strikeouts against four walks over 20 2/3 innings in four starts before he got his first bump to Class A Advanced Fort Myers. He's been in the Florida State League and has continued to settle in nicely with a 3.00 ERA and 58 punchouts over 45 innings. The rest of the prospect world has taken notice, and not only has Balazovic rocketed from his preseason ranking at No. 19 in a crowded Twins system to his current spot at No. 5, he also got the call for Sunday's game, his first All-Star Game of any kind since going pro three years ago.

"I don't even have words for it, honestly," he said. "Last year, I started in extended. Got called up for an outing. Got sent back down. Then a week later, got called up again and spent the rest of the season there. Now, everything's going by so quick. It feels like it's happening so fast. It's awesome trying to take it all in."

Behind Huff, AL rallies for tie in Futures Game

Balazovic's rise to prospect prominence might look like one of fits and starts, but in truth, it's more typical development, even if it's not the one normally seen by Futures Game stars. One of the biggest keys to that ascent has been adding velocity over his four seasons in the Minors to the point where he throws regularly in the mid-90s, a jump that came after Balazovic realized what his physique could handle over a full season in the pros.

"I put on a little bit of weight since last year and I feel like that's allowed me to use my lower half more than before," said the right-hander, who's listed at 6-foot-4 and 175 pounds. "That's probably the biggest thing, knowing my body a little bit more and how it can handle the extra weight."

But a fastball alone does not a starting pitching prospect make, and Balazovic draws above-average grades for his slider. But it's the changeup that the Twins hurler credits with helping make his jump. Often an unused pitch by prep players until they reach the pros, Balazovic's change has improved to the point where it's confusing hitters -- given the similarity to the fastball without the velocity -- and becoming more than just a show-me offering.

"I was happy I got the chance to go back to [Cedar Rapids], just so I could work on that pitch and be able to use it in certain counts, like when I'm behind," Balazovic said. "Just get that comfortability with it. I feel like that helped me a lot to move up to [Class A Advanced], and it's just gotten better since then. That and my breaking ball and tunneling the fastball with my breaking ball. I've been using that sequence a lot more. I feel like that helped me get those swings and misses."

The improvement of all three offerings and Balazovic's ability to throw them for strikes has led the righty to fan 33.8 percent of the batters he's faced this season between Cedar Rapids and Fort Myers. That's 13th-best in the Minors among the 500 pitchers who've thrown at least 60 innings. And it's the jump in stuff and results that has Balazovic standing out in the loaded system of the AL Central leaders that already features fellow Futures Gamer Royce Lewis and fellow Top-100 prospects Alex Kirilloff, Brusdar Graterol and Trevor Larnach. And it secured a spot on the AL roster Sunday.

But don't worry -- even with the format change, Balazovic was quick to point out there's still a Canadian flag patch on the left side of his uniform, right below his heart. And there's a Twins logo near his right shoulder, his pitching shoulder. Both serve as a reminder of how far he's come to reach this point and how far he has to go.

"It's awesome what I've accomplished," he said. "But it's not the end goal. That's where my focus is: just try to do the best I can and force their hand. I'm not trying to do anything else but throw the baseball."