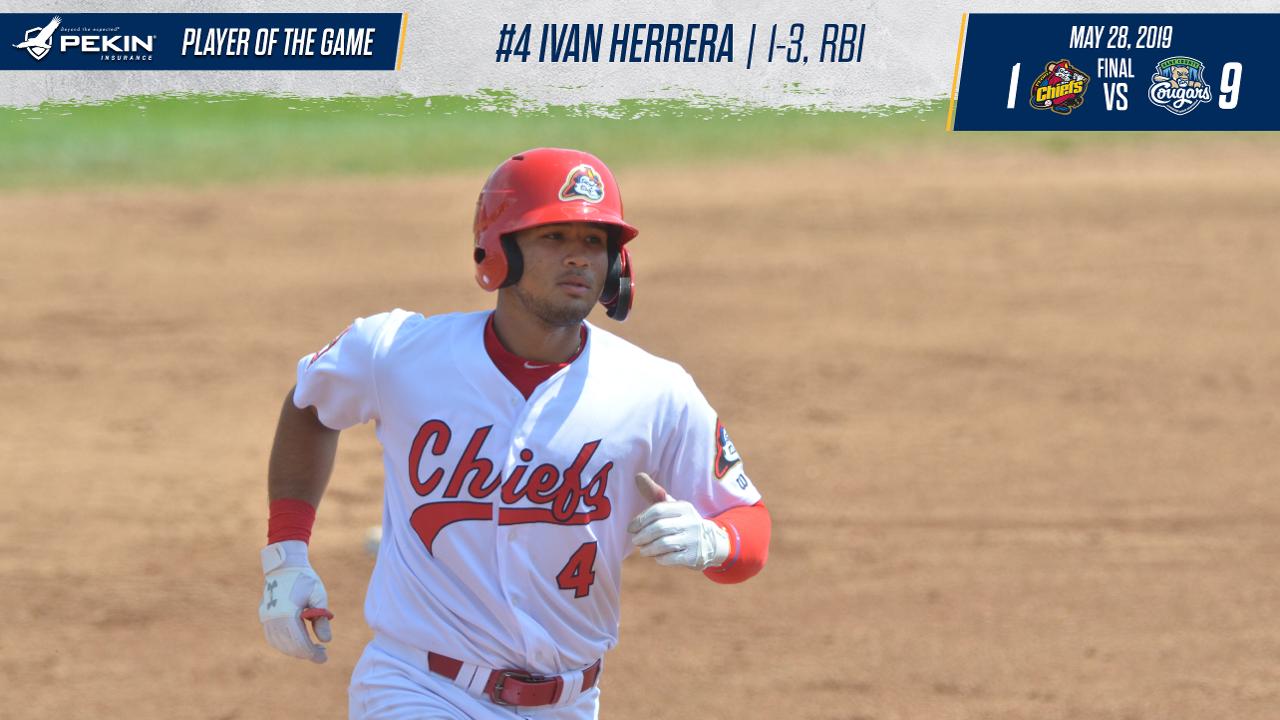 Peoria, IL - With the Peoria Chiefs trailing the Kane County Cougars 9-1, rain ended the game with one out in the top of the seventh inning Tuesday night. The Chiefs fall to a season-worst eight games under .500 at 21-29 with two games left in the homestand.

The Chiefs had a chance to break the scoreless tie in the bottom of the third. With one out, Brandon Riley and Brendan Donovan walked to put runners on first and second. Delvin Perez singled, but Riley was easily thrown out trying to score from second and Donovan was tagged out between third and home in a rundown for an inning-ending double play. Instead of having the bases loaded with one out for Nolan Gorman, the inning ended with the game scoreless.

The Cougars drew first blood in the top of the fourth against Chiefs starter Diego Cordero. A single and an error with two outs put runners on first and third before Cordero balked home the first run of the game.

Kane County added to their lead in the top of the fifth. After a single and a wild pitch, a one-out single scored the first run to increase the Cougars lead to 2-0 and a double put the Cougars up 3-0. A two-out single scored the final run of the inning for the 4-0 lead. Zack Shannon hit a solo home run off Cordero in the sixth inning for a 5-0 lead.

The Chiefs cut into the deficit in the bottom of the sixth against Justin Lewis. With one out, Nolan Gorman doubled and scored on a single by Ivan Herrera to put Peoria on the board down 5-1.

The Cougars blew the game open in the top of the seventh against Sebastian Tabata. He hit the leadoff batter and threw a wild pitch before giving up a two-run homer to Alek Thomas. Tabata walked the next two batters, committed a balk and loaded the bases on a third walk. Fabian Blanco came in and allowed a run to score on a wild pitch before walking in a run.

With the bases full of Cougars and one out in the seventh, the tarp went on the field at 8:57 p.m. The game was officially called at 9:27 p.m. with the 9-1 score standing as official.

Cordero (2-4) took the loss after pitching six innings allowing five runs, four earned on nine hits with four strikeouts and two balks. Tabata allowed four runs on one hit with three walks and one hit batter without recording an out. Blanco walked two and struck out one in his 1/3 of an inning and the bases were loaded against him when the game was called.

The Chiefs continue their series with the Kane County Cougars Wednesday at 6:35 p.m. Promotions can be found on the team website or social media accounts Peoria will start LH Colin Schmid (1-1, 3.75) against Kane County RH Jackson Goddard (3-2, 2.81). The broadcast can be heard, starting with the Pre-Game Show at 6:20 p.m. on the Peoria Chiefs Tune-In Page, which is free and also has a free app for smartphones and tablets.