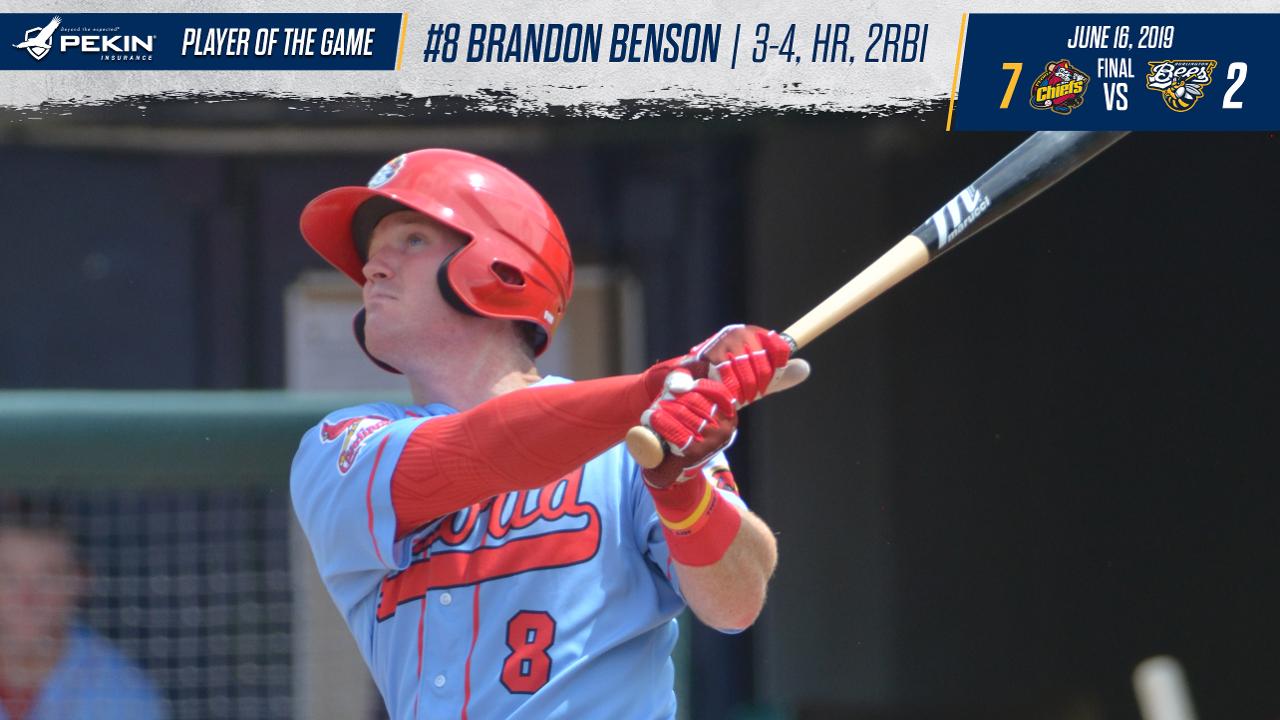 Peoria, IL - The Peoria Chiefs ended the first half of the 2019 season with a 7-2 win over the Burlington Bees Sunday afternoon at Dozer Park. The Chiefs finish the first half with a 30-39 record, marking the 18th straight year they have won at least 30 games in the first half.

Burlington got on the board early in the top of the first against Chiefs starter Franyel Casadilla. Jordyn Adams led off with a double and scored on a single from Kevin Maitan for the 1-0 lead.

Peoria tied the game in the bottom of the first against Burlington starter Cristopher Molina. Nolan Gorman walked with one out, and advanced to third on a single from Juan Yepez. Gorman scored the tying run while Yepez was caught in a rundown between first and second.

The Chiefs took their first lead of the game in the bottom of the third. On the first pitch, Brandon Benson hit a solo homerun, his second of the season, to put the Chiefs ahead 2-1. The homerun was the Chiefs' first since Benson's homerun on June 5th, a span of 102 innings.

The Bees tied the game in the top of the fifth. Francisco Del Valle hit a solo homerun with one out to tie the game at two.

The Chiefs regained the lead in the bottom of the fifth. Alexis Wilson, Benson, and Josh Shaw each singled to load the bases. Delvin Perez grounded into a double play but Wilson scored the go-ahead run for the 3-2 lead.

Peoria increased their lead in the bottom of the sixth. Yepez and Brendan Donovan walked to start the inning and Brandon Riley hit an infield single to load the bases with one out. Wilson hit a sac fly to score Yepez from third to increase the Chiefs lead to 4-2. Benson followed with a single that scored Donovan from second for the 5-2 lead.

The Chiefs continued to pad their lead in the bottom of the seventh. After Perez reached on a fielder's choice, Yepez hit his second double to put runners on second and third. With two outs, Brendan Donovan singled to score Perez and Yepez to increase the Chiefs lead to 7-2.

The Midwest League All-Star break begins Monday, the Chiefs open the second half at Dozer Park against the Cedar Rapids Kernels Thursday at 6:35 p.m. Promotions can be found on the team website or social media accounts. The broadcast can be heard, starting with the Pre-Game Show at 6:20 p.m. on the Peoria Chiefs Tune-In Page, which is free and also has a free app for smartphones and tablets. The game is also available on MiLB.tv to subscribers.