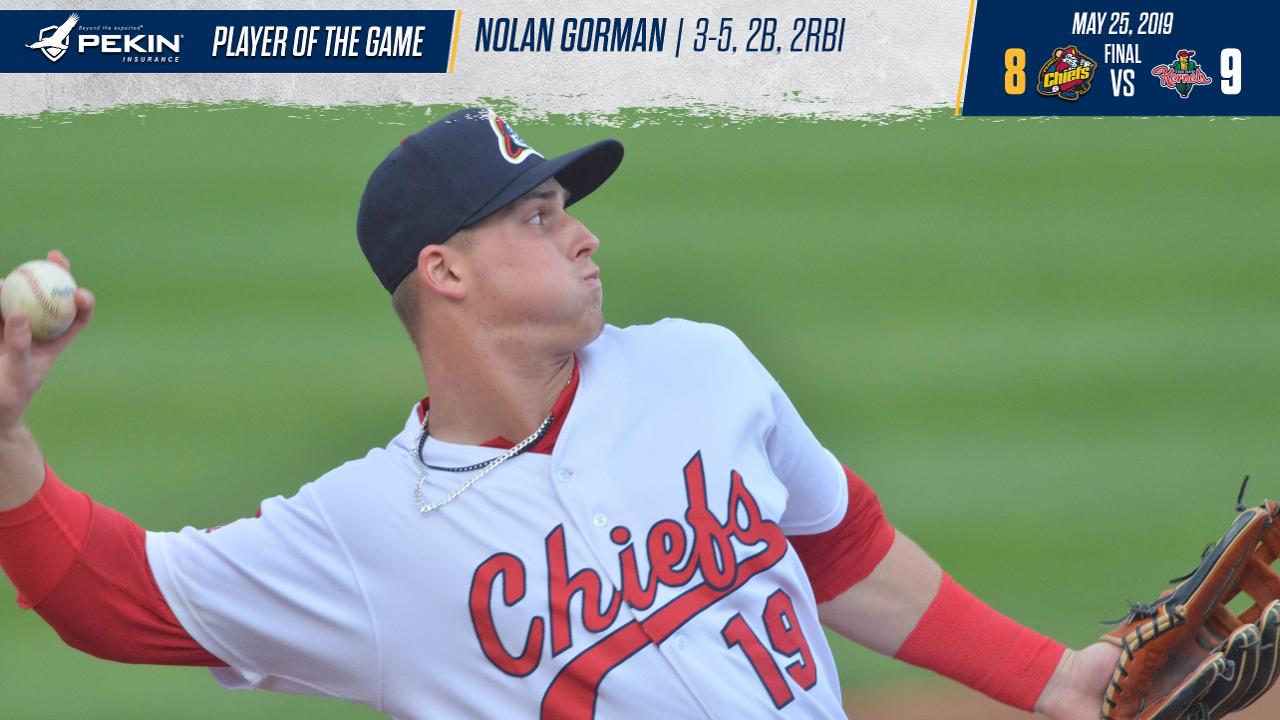 Cedar Rapids, IA - Despite scoring eight runs and knocking 14 hits, the Peoria Chiefs fell 9-8 to the Cedar Rapids Kernels Saturday night. The Chiefs drop to 21-27 on the season with game three of the series set for Sunday at 2:05 p.m.

The Chiefs got on the board early in the top of the first against Kernels starter Cole Sands. Brendan Donovan led off with a walk and advanced to second on a bunt single by Delvin Perez. Nolan Gorman singled to score the first run of the game and put runners on the corners. Perez scored from third on a wild pitch for the 2-0 lead.

Cedar Rapids answered right away and tied the game in the bottom of the first against Chiefs starter Alvaro Seijas. With two outs Gilberto Celestino hit a two-run homerun to tie the game at two.

Peoria regained the lead in the top of the second. Jhon Torres led off with a single, but was thrown out at second on a fielder's choice by Wadye Ynfante. Ynfante stole second and scored on the second hit by Perez to put the Chiefs ahead 3-2.

The Kernels tied the game without recording a hit in the bottom of the second. Ben Rodriguez was hit by a pitch and the next three batters walked to tie the game at three. Seijas responded with an inning-ending double play to limit the damage.

Cedar Rapids took their first lead of the game in the bottom of the fourth. With runners on first and third, the go-ahead run scored on a sac fly and with two outs the Kernels hit back-to-back singles to push three runs across the plate for the 6-3 lead.

Peoria cut into the deficit in the top of the fifth. Donovan and Perez hit back-to-back singles to start the inning. With one out, a double steal put runners on second and third as Ivan Herrera singled to score Donovan and cut into the Kernels lead 6-4.

The Chiefs continued to fight and took the lead for the second time in the top of the sixth. Torres and Ynfante singled to start the inning and then scored on Donovan's double to tie the game at six. With two outs, Gorman doubled to score Donovan and put the Chiefs ahead 7-6.

The lead changed for the fifth time as the Kernels tied the game in the bottom of the seventh. With two outs and runners on first and second, Snyder singled to score the tying run against Freddy Pacheco. Evan Sisk came in and struck out Michael Davis for the final out of the inning to strand runners on second and third.

The Chiefs took the lead for the fourth time in the top of the eighth against Kernels reliever Zach Neff. Delvin Perez reached on a fielding error by Kernels shortstop Wander Javier with two outs. Gorman singled to put runners on first and third and Ivan Herrera singled to center to score Perez and give the Chiefs the 8-7 lead.

The Chiefs continue their series with the Cedar Rapids Kernels Sunday at 2:05 p.m. Peoria will start LH Diego Cordero (2-3, 2.61) against Cedar Rapids RH Josh Winder (2-1, 3.48). The broadcast can be heard, starting with the Pre-Game Show at 1:50 p.m. on the Peoria Chiefs Tune-In Page, which is free and also has a free app for smartphones and tablets.