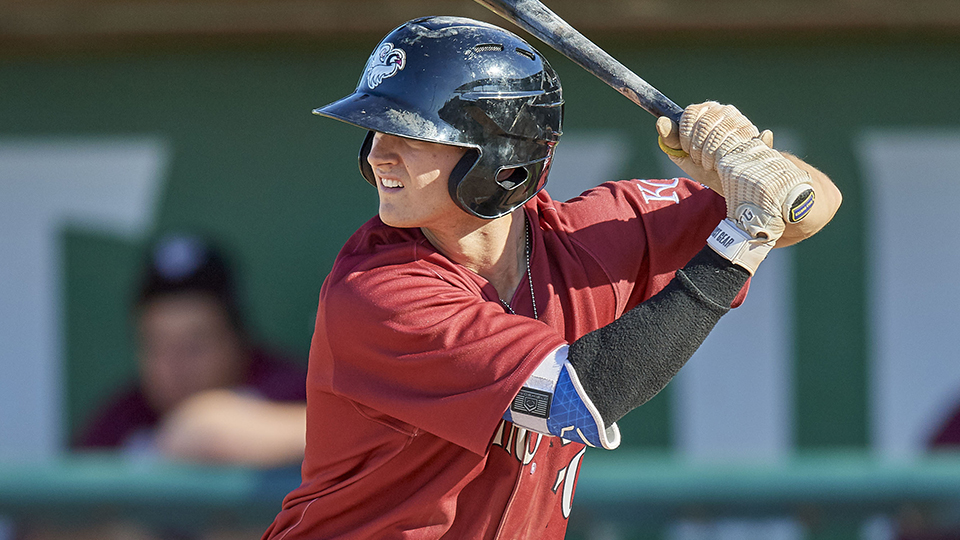 Clay Dungan had not homered in 43 games since July 17 against Orem. (Stephen Smith/Four Seam Images)

Clay Dungan hit a go-ahead three-run homer in the seventh inning as the Chukars beat the Mustangs, 6-4, at Melaleuca Field to reach the Championship Series. Idaho Falls will face Ogden, which completed a two-game sweep of Grand Junction on Tuesday.

"These guys fought like they did the whole season," Idaho falls manager Omar Ramirez said. "These guys competed, and it was a tough couple days because of the weather, but these guys were focused."

Rain suspended the finale of the best-of-3 series on Tuesday night and kept it from being played on Wednesday as well. The teams finally got back on the diamond Thursday afternoon, despite concerns over the condition of the outfield.

"You'd rather play the same day and not wait, but it is what it is," Ramirez said. "When you're up against weather, there are some things you can't control, and that's one. It was a beautiful day today to clinch the division."

The game picked up with Billings leading, 1-0, in the second inning, but Idaho Falls scored twice in the bottom of the frame before James Free homered in the third to tie it at 2-2.

Four innings later, with the score knotted at 3-3, Dungan came up with two on after Isaiah Henry was hit by a pitch and Jose Marquez walked. Dungan led the league with 91 hits during the regular season and ranked second with a .357 batting average but slugged only two homers in 65 games. Despite that lack of power, the ninth-round pick in this year's Draft was just the player Ramirez wanted up in that situation.

"When they walked Marquez, they were playing with fire because we got the second-best hitter in the league coming up next," the skipper said. "I thought, 'This is what I want and this pitcher has pretty good stuff, but we had the right guy at the plate.' He's been doing that the whole season, and he came through for the team. Got a good pitch to hit and put it on the other side of the fence."

Billings threatened in the ninth, cutting the deficit to 6-4 on Quin Cotton's RBI double and bringing the tying run to the plate. But right-hander Brady Cox came on, struck out TJ Hopkins and got Free to pop to third baseman Jimmy Govern to end the series.

Idaho Falls made the playoffs on the strength of its first-half North Division title, edging Missoula by 1 1/2 games. The Chukars were the league's worst team in the second half at 13-25 and finished with the sixth-best overall winning percentage but won four of their final five games to get back on track for the playoffs.

"I was telling the guys we cannot just turn the switch on and off whenever we want, but I think they did," Ramirez said. "The last 10 games, we picked it up. The pitching was better, defense was better, timely hitting was better, and that's what happened this series against Billings."

The Chukars will have a quick turnaround before hosing Ogden in Game 1 of the best-of-3 Championship Series on Friday.