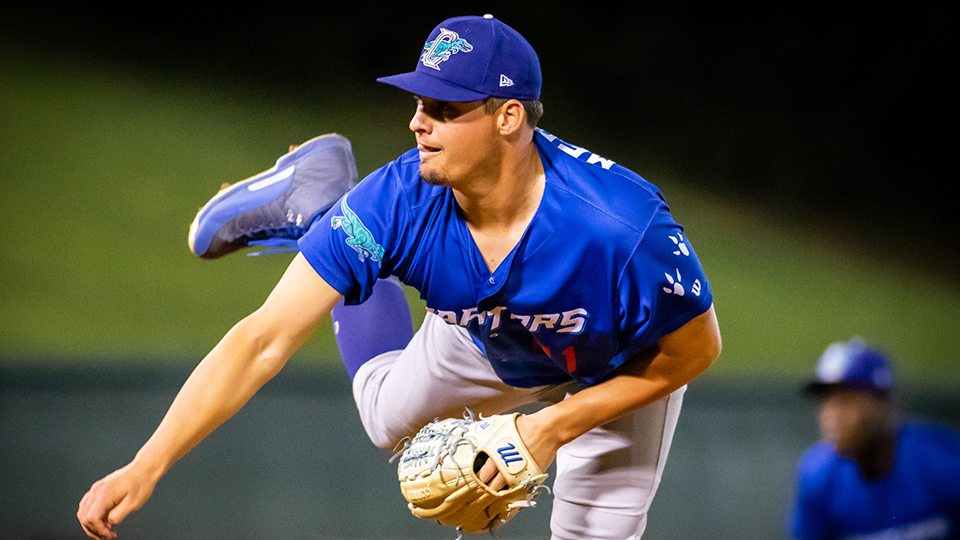 Corey Merrill had never thrown more than two full innings during his first professional season after undergoing Tommy John surgery. He had a career night in a big spot for Ogden on Friday night.

The Dodgers prospect struck out seven over three innings of hitless relief as the Raptors beat Idaho Falls, 5-3, in Game 1 of the best-of-3 Pioneer League Championship series at Malecula Field.

The Raptors trailed, 3-1, in the fourth when Idaho Falls loaded the bases with nobody out. Merrill (1-0) relieved Jacob Cantleberry and ended the threat by striking out Wyatt Mascarella, Tyler Tolbert and Jose Marquez.

Ogden rallied in the fifth, taking advantage of an error and grabbing the lead on a sacrifice fly by Jimmy Titus and an RBI groundout by Jon Littell.

Merrill, a 2017 37th-round Draft pick, fanned Clay Dungan on three pitches to begin the bottom of the fifth and, after walking Travis Jones and plunking Rhett Aplin, set down Juan Carlos Negret and Jimmy Govern on ground balls. He completed the longest outing of his pro career by striking out the side in the sixth.

"Honestly, I was talking to a couple of the guys in the office after the game and in my opinion I think it was the outing of the year," Raptors manager Austin Chubb said. "He came in and didn't try to do too much. He's a cutter guy. He stayed through the middle and let his cutter work. It's got some late bite and guys were swinging over the top of it. It got us through the middle of the game.

"I was down in Arizona during extended [spring training] and I saw him throwing live BP, getting back to 100 percent. He's progressively gotten better this year. He looks strong, and we are really excited for him."

Ogden tacked on an insurance run on a pair of defensive miscues in the seventh. Sauryn Lao reached second on an error by Negret in right field and came home on an error by Dungan at short.

"We had used a few guys out of the 'pen up until that point," Chubb said. "It wasn't a sigh of relief, but adding that run was huge."

Mark Mixon replaced Merrill and gave up a leadoff single in the seventh before recording a pair of outs. Mitchell Tyranski retired all four batters he faced, striking out the side in the eighth, and Nick Robertson fanned one in a perfect ninth for his second postseason save.

"Tyranski and Robertson have been shutdown guys for us all year," the skipper said. "We feel confident if we can get the ball to one of those guys with the lead, we feel pretty good of our chances."

After completing a two-game sweep of Grand Junction in the Pioneer League semifinals on Monday, Chubb said he knew it might be a few days before Ogden would return to the diamond due to inclemant weather that delayed Idaho Falls' series against Billings.

"Once we saw there was some rain in the forecast, we thought we could potentially have four days off," he said. "We got three, the same amount of time we had off for the All-Star break. But it was a little more nerveracking. We held some workouts, but we were waiting around and getting antsy. We can't make excuses. It is what it is."

With a quick turnaround before Game 2 at home on Saturday, Chubb said the game plan had to be modified.

"I think we used a couple more guys then we expected," he said. "We feel good about the guys we have coming out of the 'pen tomorrow. Hopefully, we can put some runs up on the board."