Recognized as one of Baseball's most accomplished marketers and promoters 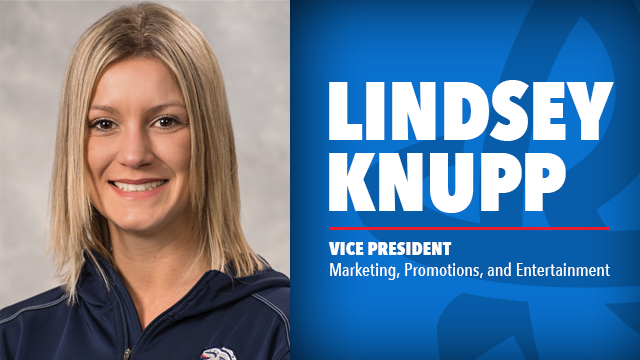 MADISON, Alabama - November 13, 2019 -- Entertainment is serious business in Minor League Baseball and the Rocket City Trash Pandas won't fool around when it comes to the fan experience.

The team announced today the hiring of Lindsey Knupp, one of the most accomplished marketing executives in the game, as Vice President, Marketing, Promotions and Entertainment.

Knupp comes to the Trash Pandas from the Lehigh Valley IronPigs, where she oversaw what many observers call the best in-game experience in Minor League Baseball. This past season, the IronPigs won the Larry MacPhail Award, recognizing the top promotional effort in the sport.

"When researching our business, every time I spoke to a friend in the industry and asked about the best fan experience in the game, I was always directed to Lehigh Valley and the amazing show that Lindsey produced," said Trash Pandas President and CEO Ralph Nelson. "I feel our fans have supported our brand like none other - we are returning the favor by creating the best in-game fan experience in the business.

"We have always said we would bring the best of the best to North Alabama and Lindsey Knupp is exactly that."

Knupp will be the caretaker of the team's public image, head the Trash Pandas' game promotions, giveaways, and all entertainment in Toyota Field, ensuring the experience in the ballpark is second to none. In fact, her title could very well be Vice President of Fun.

"I am so excited to get started building a unique and special fan experience from the ground up," said Knupp whose first official day is Nov. 21. "This is my second go-around with a start-up team and it is both a challenge and a privilege. Like everybody in Baseball, I have followed the birth of the Trash Pandas, and it is exciting to now be part of this team and great community."

"I am proud that we were able to attract one of the biggest talents in the game to the Trash Pandas," Ralph Nelson said. "I always admired Lindsey from afar and am thrilled that she is here now. I'm also proud that we continue to build a management team with such talented female baseball executives. Lindsey, Elaine, Mary and Lisa bring extraordinary skill and experience to the Trash Pandas."

During Knupp's 12 years with the Triple-A IronPigs, the team won five Golden Bobblehead Awards for its promotions, more than any other Minor League Baseball team. The awards include: Best NonGameday Event (2011), Best In-Game Promotion (2013), Best Theme Night (2016), Best Digital Campaign (2018) and Best Overall Promotion or Event (2018). She was recently praised by ESPN sports business analyst Darren Rovell for being among the "Best Marketers in Minor League Baseball."