Fans can get their photo taken with the Championship Trophy, take batting practice on the field, and celebrate the first Midwest League title in 14 years. 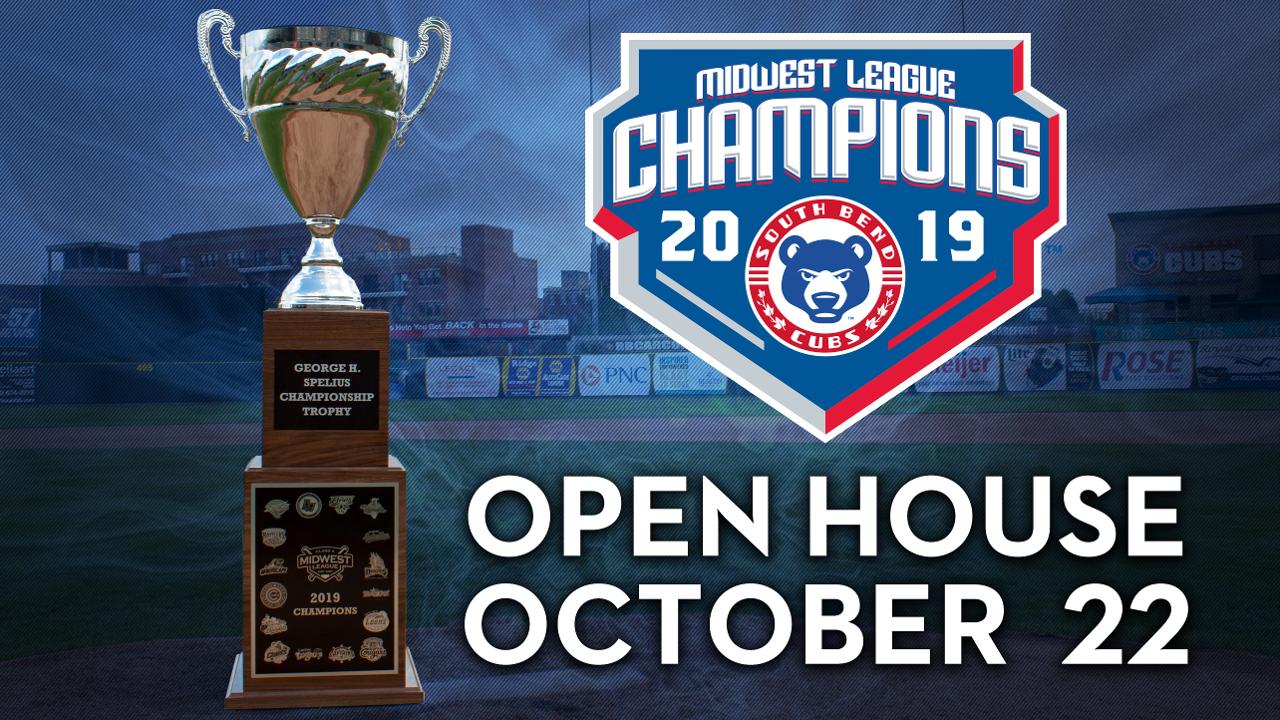 SOUTH BEND, IN - Having won their first Midwest League Championship in 14 years and first as a Chicago Cubs affiliate, the South Bend Cubs will host a Championship Open House at Four Winds Field on Tuesday, October 22. Gates open at 6:00 p.m. with free admission and parking.

"Our October Open House events are an annual tradition," said South Bend Cubs President Joe Hart. "Every year we get the opportunity to invite our fans one last time to Four Winds Field and celebrate the accomplishments of the past year. This year, we're proud to celebrate our first Cubs Championship!"

The 2019 Midwest League Championship Trophy will be on display for fans to see and get their picture taken with it. There will also be new Championship apparel available for purchase at the Cubs Den Team Store and fans can take 25% off their entire purchase from 6:00 p.m. to 8:00 p.m. Plus, South Bend Cubs infielder Levi Jordan and catcher Gustavo Polanco will be in attendance along with messages sent by members of the 2019 Championship team.

In addition to the Championship celebration, fans will also have the opportunity to take batting practice at home plate from 6:00 p.m. to 7:30 p.m. and play catch on the field from 7:30 p.m. to 8:30 p.m. Enjoy live music by the Grooveheads from 6:30 p.m. until 8:00 p.m. by the Team Store. All on field activities are subject to change depending on the weather.

To make the party even bigger, the concession stand will have special Two Dollar Tuesday drink pricing. All sodas and 16oz. domestic draft beer will be available for $2.00 each. As fans enter the stadium, they will receive a raffle ticket for special giveaways throughout the night including autographed memorabilia.

Other amenities open will be the 1st Source Bank Performance Center, Miller Lite Tiki Hut, special appearances by Stu and Swoop, and watch Game One of the World Series on the video board. Food and beverages will also be available for purchase.

A special VIP event will take place for season seat holders in the Pepsi Stadium Club. Those interested in purchasing season seats for the 2020 season can call the South Bend Cubs front office at (574) 235-9988.