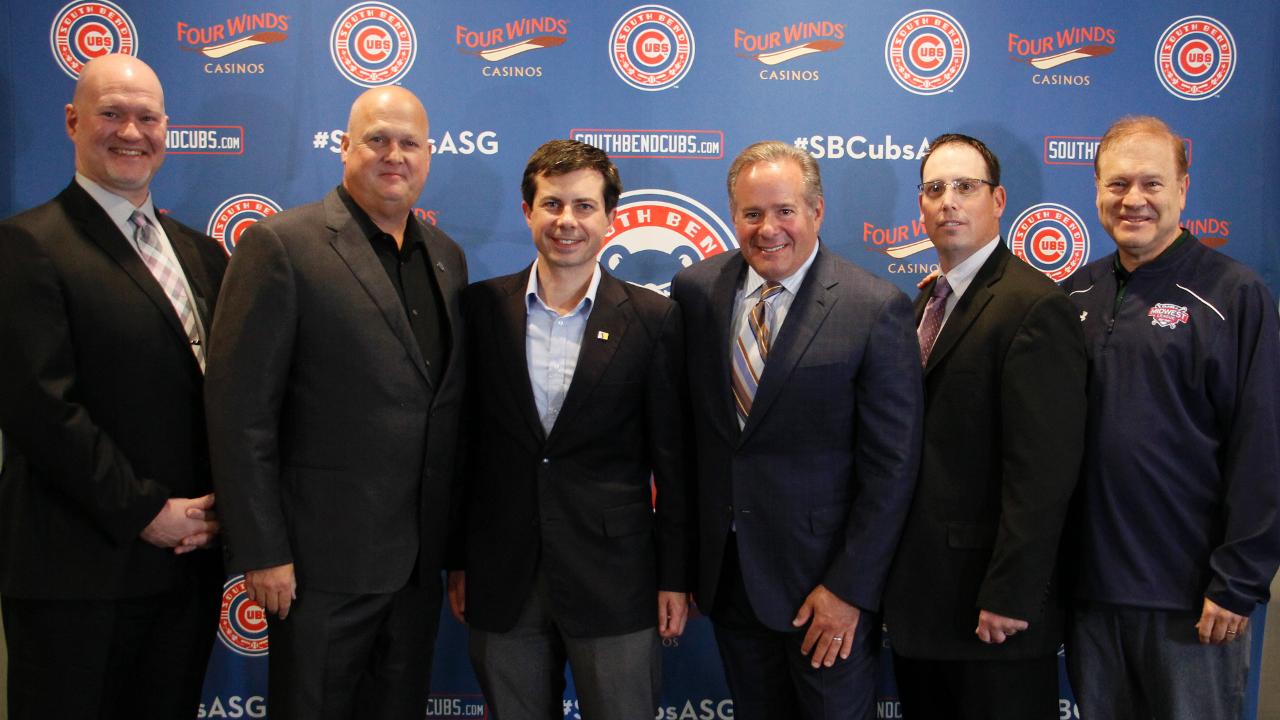 SOUTH BEND, IN - For the first time in 30 years, the Midwest League All-Star game will be held in South Bend, Indiana. The announcement was made official today from the Pepsi Stadium Club at Four Winds Field by Andrew T. Berlin, Owner of the South Bend Cubs, Dick Nussbaum, President of the Midwest League and South Bend Mayor Pete Buttigieg.

"In addition to the announcement that we've been selected to host the All-Star Game & Festivities, I'm proud to announce that both will be presented by Four Winds Casinos, the 2019 All Star Game Title Sponsor," said Berlin. "We're grateful to the Pokagon Band of Potawatomi Indians and Four Winds Casinos for their support of the baseball experience in South Bend. As partners, they've helped to make exciting moments like this one possible over the past five years."

"It's moments like these, when we can help bring national attention to our region through an event like the All-Star Game, that make us proud to support family-friendly entertainment and the stadium where it all happens in the City of South Bend," said Scott Brewer, Senior VP of Government Affairs and Community Relations for Four Winds Casinos. "It's thrilling to see hundreds of thousands of fans coming back downtown to enjoy Four Winds Field and the 'Great American Pastime' every summer. The 2019 All-Star Game & Festivities will be another amazing experience for all of us."

The 2019 Midwest League All-Star Game Presented by Four Winds Casinos takes place Tuesday, June 18, 2019, and will feature some of the most promising players in professional baseball today. Many of them will go on to find success in the Major Leagues.

"We are thrilled to host the 2019 Midwest League All-Star Game in South Bend," Buttigieg said. "After a 30-year wait, South Bend is proud to once again welcome players and fans alike to our renewed downtown and thriving community."

"All-Star games have become a real festival for communities who host them," Nussbaum added. "It doesn't matter if they're Major League games or Midwest League games. Thirty years ago, the All-Star Game came to South Bend, and it has been far too long for it to return. I guarantee Andrew Berlin, Joe Hart, Nick Brown and their dedicated staff will reward the fans of the South Bend Cubs and the Midwest League to an experience they will never forget. Four Winds Field in downtown South Bend will make this Midwest League President proud of his hometown."

The 2019 game will lead off with a Fan Fest at Four Winds Field on Monday, June 17 and will feature a home run derby with the top hitters in the Midwest League, an autograph session with several former Chicago Cubs players along with the 2019 Midwest League All-Star players. In addition, other family friendly activities include the Splash Pad, Toyota Fun Zone, catch on the field and running of the bases.

About the South Bend Cubs
The South Bend Cubs are the Class A minor league affiliate of the World Series Champion Chicago Cubs. Over the past 31 seasons, the team has won five Midwest League titles, most recently in 2005, and has captured 12 division titles. In 2015 the team was named Ballpark Digest's Team of the Year and received the John H. Johnson President's Award, the highest award in minor league baseball. In June 2017, Four Winds Field, home of the South Bend Cubs, was voted Best Class A ballpark in the country by Ballpark Digest. The team is owned and operated by Swing-Batter-Swing, LLC whose principal shareholder is Andrew T. Berlin of Chicago, Ill.