Members of the South Bend Cubs front office will also participate in the plunge to raise money for Special Olympics Indiana. 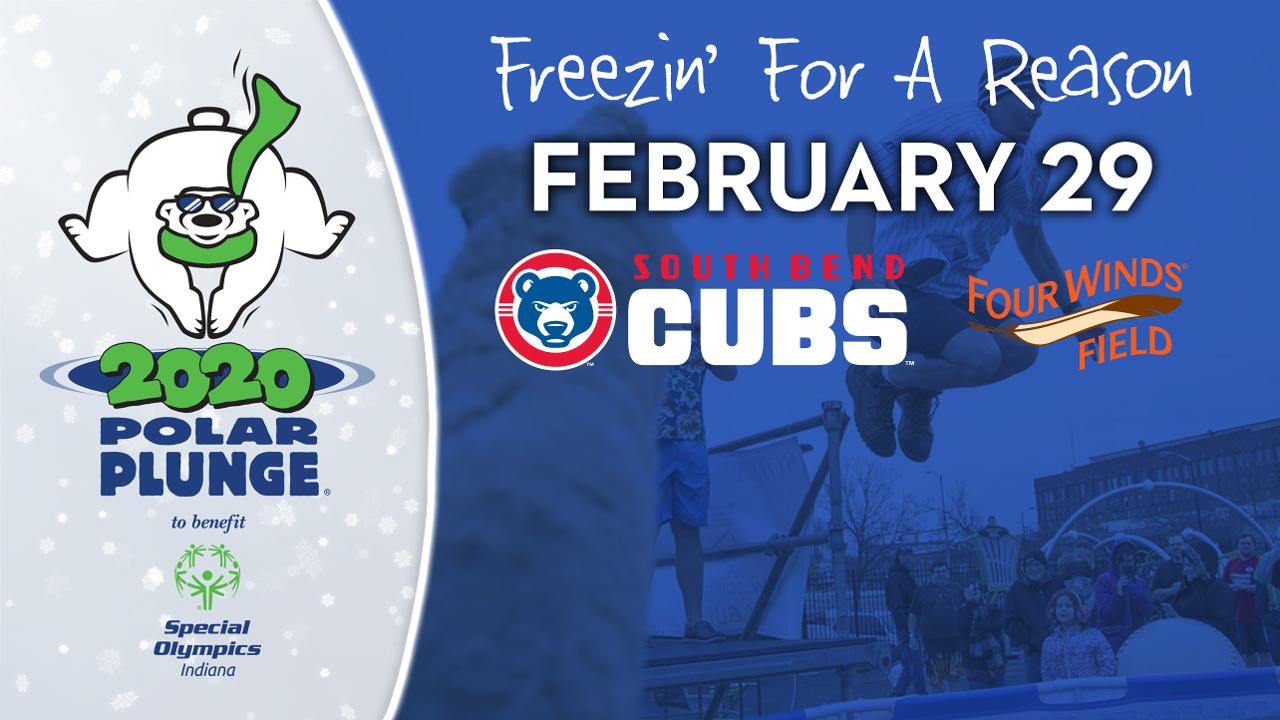 SOUTH BEND, IN - Leap year will take a whole new meaning this February as the South Bend Cubs will host the 4th annual Michiana Polar Plunge. This event will benefit Special Olympics Indiana and will take place on Saturday, February 29, 2020. Registration begins at 10:00 a.m. the with the plunge starting at 12:00 p.m. After taking the plunge, participants are invited to celebrate at the After-Splash Bash in the Pepsi Stadium Club.

"One way we accomplish our vision is through fantastic community partners, the South Bend Cubs are one such partner," stated Mohler. "From their owner, Mr. Berlin, to their general manager, to the players, and every staff member. The South Bend Cubs are a premier organization. We are excited to partner with them again next February for the 2020 Polar Plunge. Go Cubs!"

"Every year, our fans and fellow plungers have helped exceed our fundraising goal for Special Olympics Indiana," said South Bend Cubs Director of Media and Promotions Chris Hagstrom-Jones. "To help us get to $24,000, we're adding a couple of prizes for our top fundraisers. The individual who raises the most money will receive a free outdoor suite to a South Bend Cubs game in April and the chance to throw out a ceremonial first pitch. To the group that raises the most money, they will each receive a ticket voucher good for any April South Bend Cubs game."

Fans who do not wish to plunge can also donate to the South Bend Cubs front office team. Fans who donate at least $15 will be entered to win a set of four tickets to a South Bend Cubs game. Three lucky winners will be chosen after February 29. Donate by visiting SouthBendCubs.com or clicking this link.

To participate in the 2020 Michiana Polar Plunge, individuals or groups must raise a "bear" minimum of $75 in pledges. All funds raised will benefit Special Olympics Indiana. Participants can register as an individual or gather friends, family members, co-workers, civic group or school group and register as a team. Register by visiting soindiana.org and clicking on the events page. Funds raised by this event will help local athletes train and compete at local, area and state level.

Special Olympics Indiana is a not-for-profit organization that provides year-round sports training and athletic competition in more than 20 Olympic-type sports for children and adults with intellectual disabilities, reaching more than 16,000 athletes across Indiana. The organization receives no federal- or state-appropriated funds, is not a United Way agency and relies entirely on corporate, civic and individual donations. For more information about Special Olympics Indiana, call (317) 328-2000 or visit www.soindiana.org.