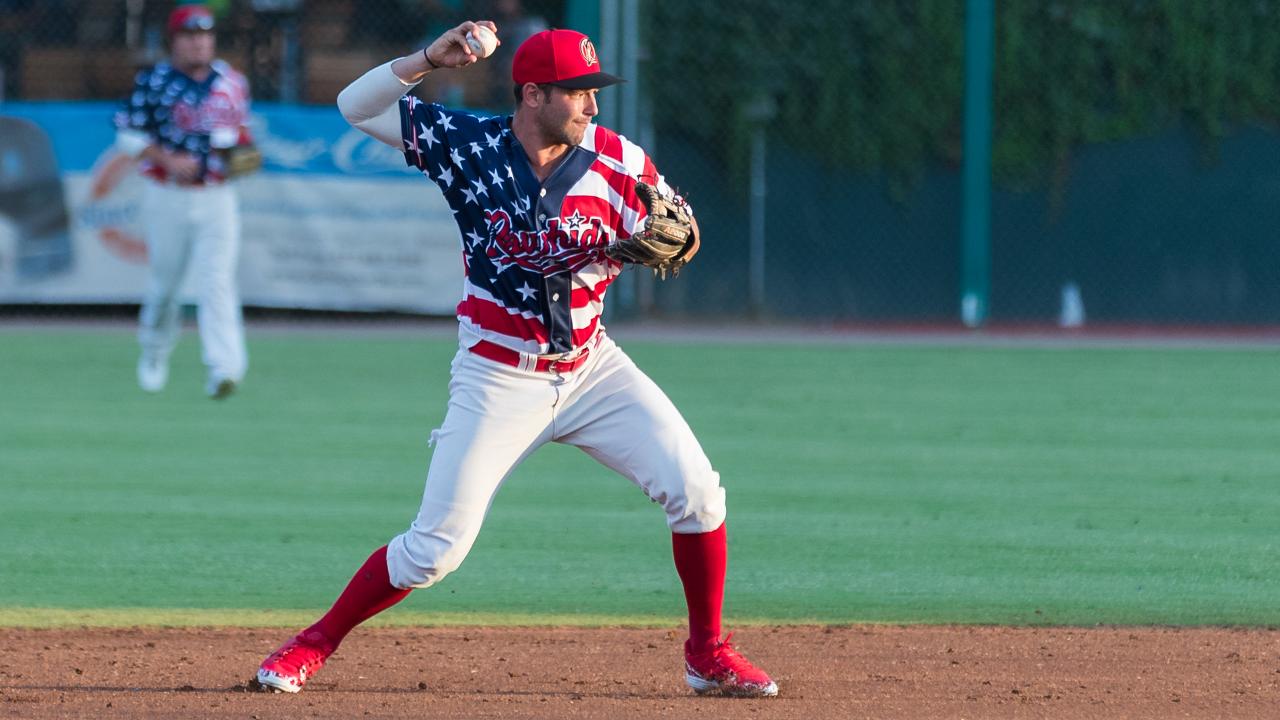 VISALIA, CA - Through six innings, Jeff Bain was all-but automatic. Coming off of a start where he allowed eight runs against the same Stockton team he faced tonight, Bain locked in from the first pitch, retiring the first four hitters he faced.

When Brett Siddall hit a flyout to the wall to end the second, Bain (W, 4-2) took his game to another level. He struck out the side in order in the third, and each of the next seven men that he set down was by strikeout. He cruised into the sixth when, with two outs, Chase Calabuig reached on a two-base error. But Bain got Viosergy Rosa to fly out to center to end the inning.

With his pitch count rising, Bain was lifted after the sixth, but struck out a season-best eight hitters, one shy of his career high, and walked three. his performance was the first no-hit start by a Rawhide pitcher this year.

Carlos Bustamante worked around a leadoff walk to keep the no-hitter intact through the seventh, then he punched out the first two hitters of the eighth, bringing up Trace Loehr. Loehr muscled a soft line drive past the reach of Luis Alejandro Basabe and into right to end the no-hit bid at 7.2 innings.

Offensively, Visalia (66-65/28-32) gave Bain plenty of support to work with early on. Drew Ellis led off the second by lining a double into left center off of Ports starter Zack Erwin. Erwin got the next two hitters before Anfernee Grier blasted a ball into the gap in right center. Ellis scored with ease and Grier hustled his way to a triple, putting Visalia up 1-0.

Three pitches later, Adam Walton left the yard to left for his second home run of the homestand, and Visalia led 3-0.

Erwin (L, 8-10) settled down over the middle innings and set down nine straight Rawhide hitters before Jasrado Chisholm singled with one out in the sixth. Renae Martinez then reached on a grounder down the line that took a trick hop and bounced off the wrist of third baseman Brallan Perez.

Runners were at the corners for Pavin Smith, who took advantage when Martinez was put in motion by doubling into left, plating two runs and putting the Rawhide up 5-0.

Stockton (72-60/27-34) did not advance a runner to second base until the sixth inning, though they loaded the bases against Mason McCullough in the ninth. With two outs, McCullough got a lineout to right from Perez to end the game.

The Rawhide now hold a two-game lead over the Ports in the second half standings with nine games remaining in the regular season. Their magic number to eliminate Modesto and clinch a playoff berth is now at eight.

Visalia's last no-hitter came in July of 2003, when Jeff Francis no-hit Modesto. They have never thrown a no-hitter since re-branding as the Rawhide a decade ago.

The Rawhide look for the series win tomorrow night when they send RHP Connor Grey (10-9, 4.93) to the hill against Ports RHP Kyle Friedrichs (2-2, 3.92). First pitch is at 6:00 PM and tickets are available on rawhidebaseball.com.

The Visalia Rawhide are a professional baseball team in the Class A Advanced California League and are the only professional sports team in Tulare and Kings counties. The team has been an affiliate of the Arizona Diamondbacks since 2007 and is entering their 72nd year of play in 2018. The Rawhide renovated their home at Recreation Ballpark in 2009 and have since become the largest gathering of individuals in Tulare County, having set an attendance record for the seventh time in the past eight seasons in 2017. In 2018, the Rawhide look to continue their reputation for hosting competitive baseball while providing affordable family entertainment. To be a part of the 2018 Visalia Rawhide season, please contact the Visalia Rawhide Ticket Office at 559.732.4433, visit us online at rawhidebaseball.com, or follow us on Facebook (TheRawhide), Instagram (@VisaliaRawhide), and Twitter (@VisaliaRawhide). This story was not subject to the approval of the National Association of Professional Baseball Leagues or its clubs.