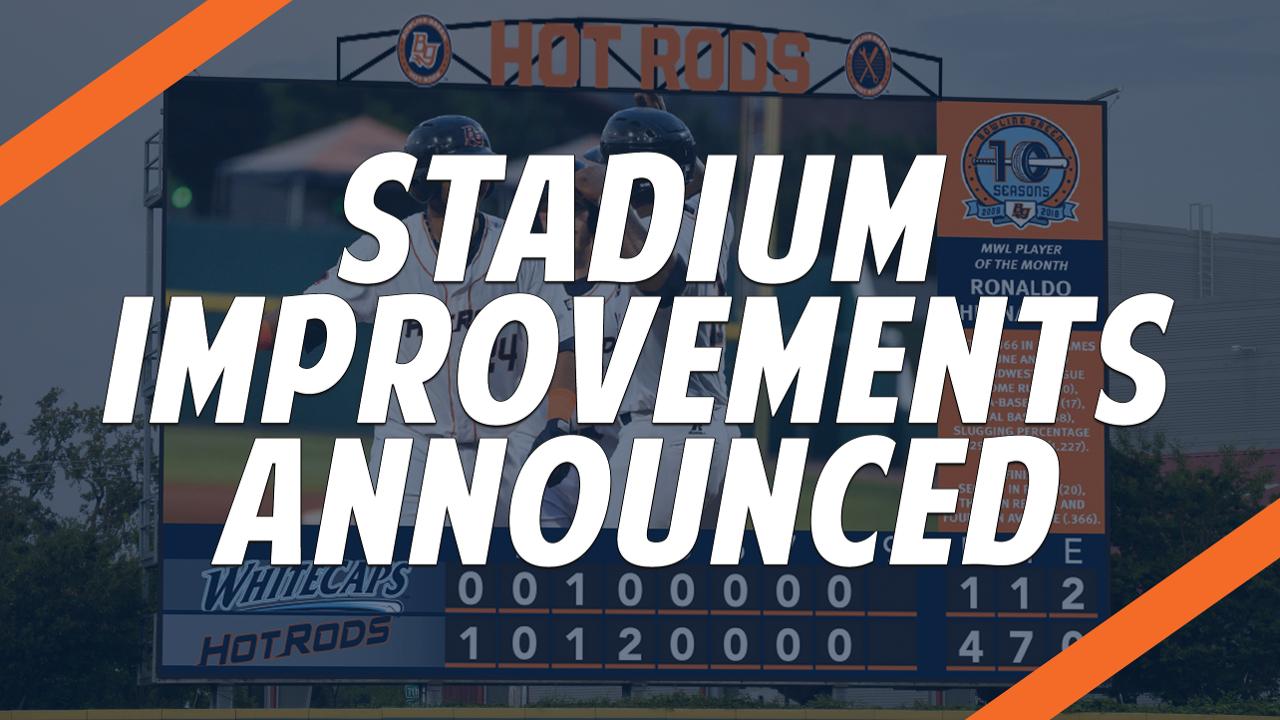 BOWLING GREEN, KY - The Bowling Green Hot Rods, in conjunction with the Warren County Downtown Economic Development Authority, announced a stadium improvement plan for Bowling Green Ballpark in excess of 2 million dollars today. The improvement plans are all scheduled to be completed by opening day April 6th, 2019, as the Hot Rods begin their 11th season in Bowling Green.
"We are tremendously excited about the future of the Hot Rods and Bowling Green Ballpark. said Hot Rods owner Jack Blackstock." These changes will only continue to enhance the fan experience at the Hot Rods games, but also changes the landscape of what we are able to do for special events."

One of the most visible changes will be a new HD scoreboard and LED board at Bowling Green Ballpark. Foremetco Sports, out of Atlanta Georgia, will be installing the new 35 ft tall by 56 ft wide video board that will almost triple the size of the current videoboard in place. The new HD board will have the highest resolution of any videoboard in Minor League Baseball by taking advantage of the latest technology offered in outdoor boards. Both boards will feature 13.3 mm that allow for a true HD view. The extra enhancements in equipment will also allow the Hot Rods to have an in-house game feed as well as broadcast their games on MiLB TV for the first time in franchise history.
The ballpark improvement plan will complete the 360-degree walkway around Bowling Green Ballpark. The original design of the ballpark was to have the walkway as part of the stadium, but it was eliminated during the construction phase due to budget concerns. Behind the walkway will be additional signage structures added that were also part of the original plans.

With the walkway completed there will be a new "Splash Zone" constructed for kids behind the centerfield wall. The 1500 square foot splash zone will be a zero-entry splash area featuring a 10-foot-tall water fountain shaped like a baseball bat and ball. It will also have 30 ground to air water fountains. In addition to the splash zone behind the batters' eye will be two new restrooms and two changing rooms for those who choose to bring their swimsuits. Local contractors, Stewart Richey Service Group, will be overseeing the entire outfield projects and working in conjunction with Countryside Play Structures on the splash zone.

"Finishing the 360 walkway and the splash zone are two of the ideas that our staff have been dreaming about adding for the past five years." Said Eric C. Leach, Hot Rods General Manager and COO. "We feel that both of these additions will allow us to utilize the entire ballpark space and continue to bring quality family entertainment to South Central Kentucky."

The entire suite level will be receiving new glass as part of the Club renovation. The current glass has a limiting three-foot glass opening to view the game. The new glass will be ten feet tall from floor to ceiling allowing for better views and a more open feel. Hot Rods owner Jack Blackstock said that after visiting dozens of ballparks across the country one of the things he noticed was how impactful having an open feeling on the suite level is to the customer experience. The only major difference was in the glass being much bigger and by making that change it will enhance the fan experience. Scott, Murphy, and Daniel will be the lead contractor for the suite level and Reinhart Club projects during the off-season.

Fans will also see a lot of smaller changes around the ballpark for the 2019 season. Notable changes have already started with the sandblasting of the front entry which will feature new signage coming soon. As fans enter the ballpark next season they will be going through new gates that will be extended outward to allow easier entry on busy nights with giveaways. Additionally, new tables and chairs will be added to the left field "Goin' Yard" picnic area.
The Bowling Green Hot Rods 11th season starts at home on Saturday, April 6th. Full and partial season tickets are on sale now by visiting www.bghotrods.com or calling 270-901-2121.

Dropbox link to artist renderings of the projects along with a gif of the videoboard changes is attached. https://www.dropbox.com/sh/0g8bvwbgqmlth4w/AADCdwkfJtJ-8TNuSHLwOwuna?dl=0