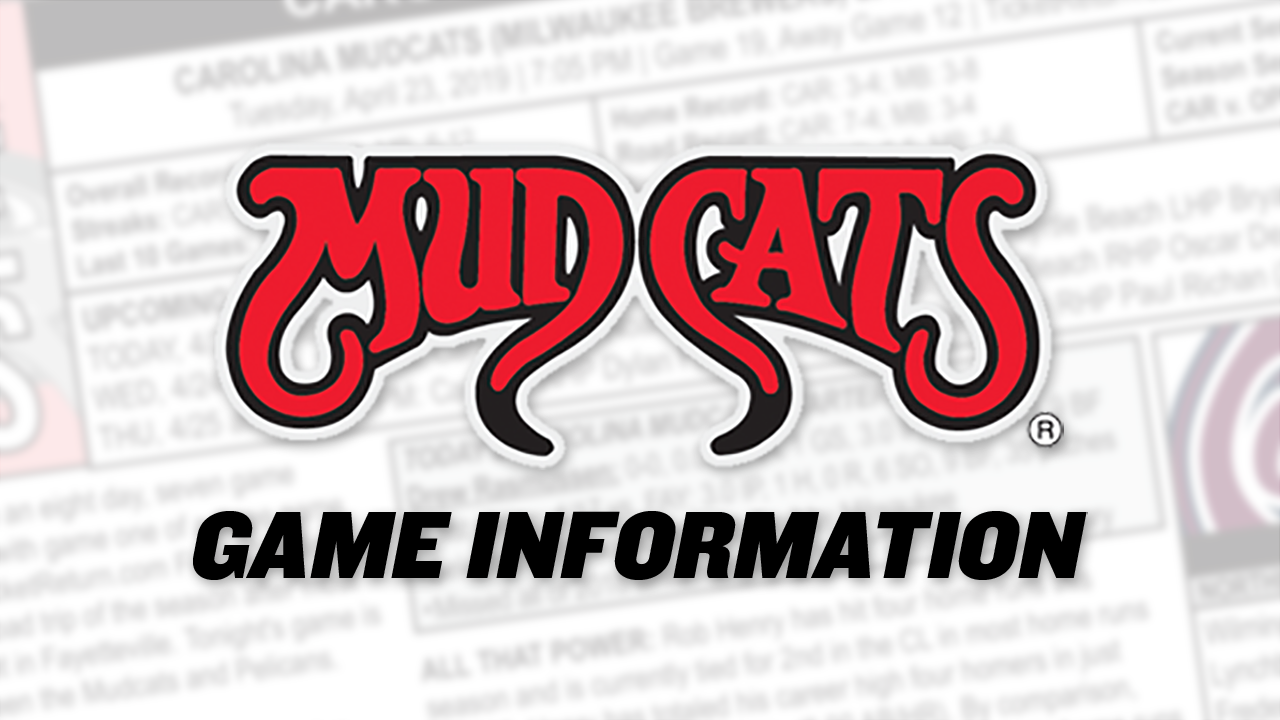 TODAY: Having lost four straight, the Mudcats play the final game of the 2019 season today with game four of a four game series in Salem, VA versus the Salem Red Sox... Today's game is also the 15th and final meeting between the two teams this season. The Red Sox took a 3-0 lead in the current series with a series and second half championship clinching victory yesterday; they also took an 8-6 lead in the overall season series between the two teams.

ABOUT THE LAST ONE: The Mudcats fell to 65-73 overall with yesterday's 3-1 loss to the Red Sox; matching last season's overall record as the 2018 team finished the year going 65-73 overall. The Mudcats have finished below .500 in each of the last two seasons and below .500 19 times in the club's 29 season history.

EARLY FAREWELLS: C Payton Henry suffered a season ending leg injury on 8/27... OF Tristen Lutz has not played since 8/17 and is not expected to return... CL MVP and C Mario Feliciano was promoted to Double-A Biloxi on 8/25... CL Pitcher of the Year and starter RHP Noah Zavolas reached his season long innings limit in early August (8/14) and will not return... Manager Joe Ayrault and Hitting Coach Bobby Bell have returned to their homes in Florida due to Hurricane Dorian.

BICKFORD'S RUN: Phil Bickford has pitched through 26.2 consecutive scoreless innings (6 BB, 39 SO, 13.2 SO/9) dating back to 6/30. He has not allowed a run since giving up a three-run home run that scored two inherited runners on 6/30 vs. the Nationals at Five County Stadium. That homer came off the bat of Bickford's first batter faced after he had taken over in the ninth in relief of Clayton Andrews; Bickford went on to record two outs after the homer and has not allowed a run since... Bickford has additionally pitched through 13 straight scoreless appearances from 7/9 through 8/28 (26.0 IP, 6 BB, 39 SO, .108 AVG)... Among Carolina League pitchers with at least 30.0 IP, Bickford is currently 3rd in K/9 (14.6), 2nd in K% (41.1%) and 2nd in xFIP (2.03) per Fangraphs.

MVP: Mario Feliciano was named the 2019 Carolina League Most Valuable Player on 8/22 (promoted to Double-A Biloxi on 8/25). Feliciano was the first Mudcats player to win the MVP award since the Mudcats joined the Carolina League for the 2012 season. Feliciano, however, is the fifth player overall in team history to be named league MVP as Mark Johnson (1994), Jason Kendall (1995), Gaby Sanchez (2008) and Dave Sappelt (2010) were all named Southern League MVP during Carolina's Double-A and Southern League era (1991-2011). Feliciano also earned post-season All-Star honors at catcher.

P.O.Y.: Noah Zavolas was named the 2019 Carolina League Pitcher of the Year on 8/22. Zavolas is the second Mudcats pitcher in team history to earn the Carolina League's Pitcher of the Year award, joining Cody Anderson who won the same award following the 2013 season. Former Mudcats pitcher Travis Wood was additionally named the Southern League's Most Outstanding Pitcher during his 2009 season with Carolina. Zavolas also earned post-season All-Star honors at starting pitcher.