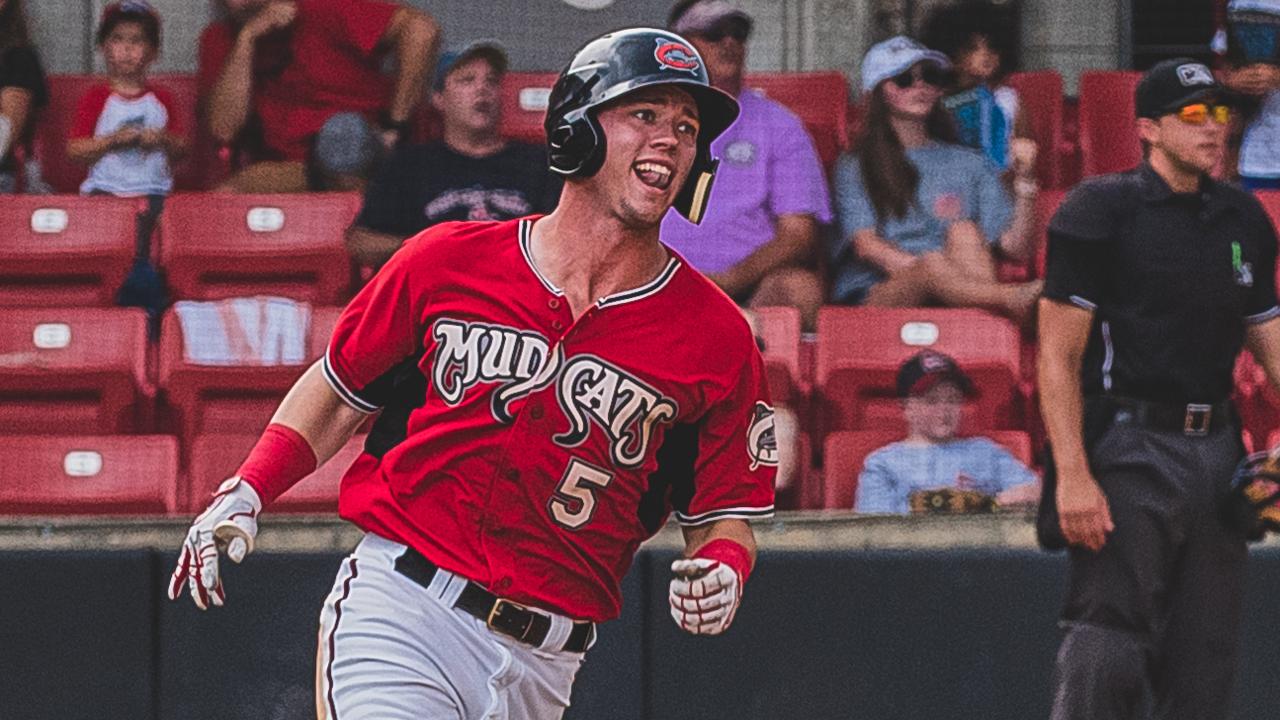 ZEBULON, N.C. - The Mudcats rattled off their fourth straight win after pounding out 12 runs on nine hits and a season high 12 walks while defeating the Lynchburg Hillcats 12-5 in game one of a three game series at Five County Stadium on Sunday afternoon.

Carolina (10-8, 49-38) led first after scoring four two out runs in the first after Rob Henry had a RBI single and Zach Clark followed two batters later with a three-run double off the center field wall. Henry's run scoring hit accounted for his 34th RBI overall and his 21st when batting with two outs in an inning this season.

Lynchburg (11-7, 43-42) quickly cut the Carolina lead to 4-2 in the second after Gavin Collins hit a two-run homer off starter Nelson Hernandez, but Devin Hairston doubled and scored on a double from Tristen Lutz in the last of the second as Carolina led 5-2 after two. Lutz went 1-for-1 with three walks and two RBI in the game.

Carolina's 5-2 lead, disappeared quickly in the third, however, as the Hillcats scored three runs including two on a home run from Oscar Gonzalez. The home run was the second of the game allowed by Hernandez, it was also Gonzalez's seventh overall and fourth at Five County Stadium this season.

The game was tied at 5-5 after the third, but Carolina went on to break it with two runs in the fourth and would not look back the rest of the way. Ryan Aguilar had Carolina's go-ahead RBI single in the fourth and Mario Feliciano drove in the second run with a ground out to short. Aguilar went 1-for-3 in the game with two runs, two walks and one RBI.

Carolina led 7-5 after the two run fourth and all seven of those runs were allowed in by Lynchburg starter Justin Garza. Garza (L, 4-6, 5.12) struck out four, walked five and allowed seven runs on five hits over three and 1/3 innings in the series opening loss for the Hillcats.

Hernandez (W, 9-6, 4.65), meanwhile, earned the victory for Carolina despite allowing two Lynchburg home runs in the game. In all, Hernandez allowed five runs (four earned) on six hits and struck out three in the victory. He finished his outing by working a scoreless fourth and fifth before leaving the game after reaching 87 pitches (53 strikes). He was later followed by relievers Cody Beckman and J.T. Hintzen who combined on four scoreless frames the rest of the way. Beckman pitched two scoreless with two hits, one walk and one strikeout. Hintzen worked the final two frames and struck out three (all in the eighth).

Carolina led 7-5 after the fourth, but went up 9-5 after Hairston brought across two more Carolina runs with a two-run single to center in the fifth off reliever Aaron Pinto. Hairston went 2-for-4 with two runs and two RBI in the game.

The Mudcats later jumped ahead 12-5 in the seventh after reliever Anderson Polanco walked five and allowed three runs in the seventh. Polanco also walked two with the bases loaded in the seventh and walked six overall while allowing three runs on one hit and six walks over an inning and 2/3.

Reliever Jonathan Teaney finished the game for the Hillcats and struck out one, walked one and allowed one hit over an inning and 1/3.

Carolina will look for its fifth straight victory on Monday night when the series continues with RHP Noah Zavolas starting game two of the three game series beginning at 7:00 p.m. at Five County Stadium.

The game will air live on the Mudcats Radio Network, The Big Dawg 98.5 FM and online at carolinamudcats.com via TuneIn Radio. The game will also stream live in full high-definition video on MiLB.tv via Minor League Baseball's subscription service.