Fourth-Year Mudcats voice honored by peers in the Carolina League 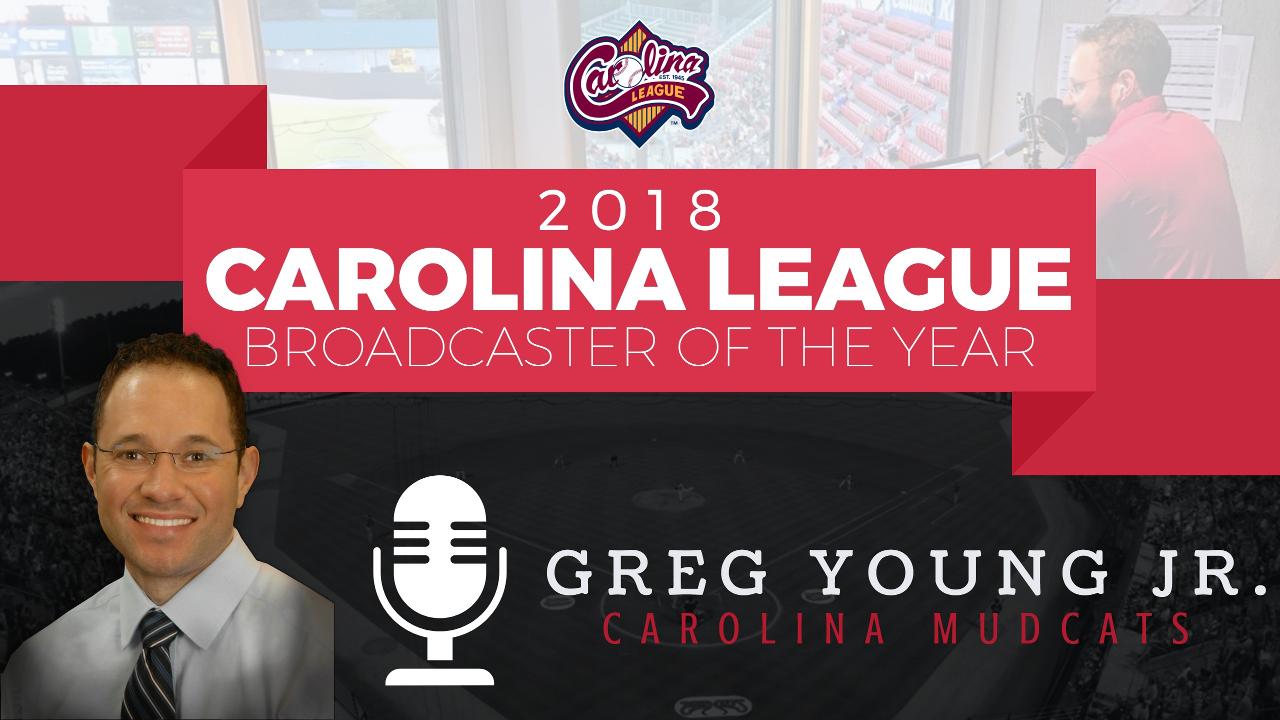 ZEBULON, N.C. (August 31, 2018) - Greg Young, the play-by-play broadcaster for the Carolina Mudcats, has won the seventh annual Carolina League Broadcaster of the Year award. Young garnered the most votes in a poll among the league's broadcasters.

Young is in the midst of his fourth season with the Mudcats and 10th overall in Minor League Baseball. The Hidden Valley Lake, Calif., native began his baseball career as a broadcast intern with the Modesto Nuts (High-A, then-Colorado Rockies, current-Seattle Mariners) before becoming the club's director of broadcasting from 2008-11. He joined the broadcast team in 2014 with the Tennessee Smokies (Double-A, Chicago Cubs) before being tabbed in 2015 as the Voice of the Mudcats.

A 2005 graduate of Sacramento State University, Young called both the 2011 California League vs. Carolina League All-Star Game and the 2018 Carolina League All-Star Classic Game. During his time in Modesto, he worked as a sports anchor at KESP AM970. He also spent time with Comcast Hometown Network and their coverage of the San Jose Giants (High-A, San Francisco Giants) and Fresno Grizzlies (Triple-A, then-Giants, current-Houston Astros).

In addition to his work in baseball, Young spent parts of four seasons from 2006-09 as the play-by-play voice of the Major Indoor Soccer League's California Cougars. He also broadcast high school football and basketball games for Comcast Hometown Network.

"It is an absolute honor and is truly humbling to be this year's recipient of the Carolina League Broadcaster of the Year award," Young said. "Especially when it follows last year's winners in Scott Kornberg and Kyle West; two of the very best broadcasters and two of the greatest people I know. Being recognized with this award helps me begin to believe that I have perhaps carried on the standard set by the great Mudcats broadcasters before me, including 2013 Carolina League Broadcaster of the Year Darren Headrick as well as Patrick Kinas, Pete Schopen and Bob Licht. I was honored when Mudcats vice president and general manager Joe Kremer brought me on board in 2015 to carry on the tremendous responsibility of presenting the magic of Mudcats baseball to fans both near and far. I am still incredibly grateful for have been afforded that chance and I strive to grow in that role every day.

"An award like this means so much, because it comes directly from my peers - the same fine and tremendously talented broadcasters who pour everything they have into every game they call. I can think of numerous reasons why all of them are more deserving of this recognition, but it is incredibly fulfilling to know that I have earned their respect. I am a big believer in hard work and that said work will always pay off in the end. That mentality was instilled in me by my parents, Greg and Belinda Young. I owe them more than I could ever repay and I thank them for everything they have done to support me in this journey. I am also incredibly grateful to all of the managers, coaches and players that I have had the pleasure of working with over the years. Thank you to the Milwaukee Brewers for allowing me the opportunity to work with such great people up and down the organization. Special thanks to manager Joe Ayrault, who always goes above and beyond to help make my job easier day in and day out. My most sincere thanks as well goes out to all of the great baseball fans here in North Carolina and everyone who has tuned in over the years for all of their support."

Tweet from @CarolinaMudcats: Greg is in the midst of his fourth season with the club, and is the second Mudcats' broadcaster to win the award.Here are just a few of his fantastic calls from the 2018 season. #MudcatsFUN pic.twitter.com/XCFwjuE8Zu

"The Mudcats organization is extremely proud to hear that Greg Young has been named the Carolina League Broadcaster of the Year," said Kremer. "Greg is dedicated to his profession, very hard-working, always prepared. I cannot think of anyone more deserving of this award, congratulations."