A System on the Rise 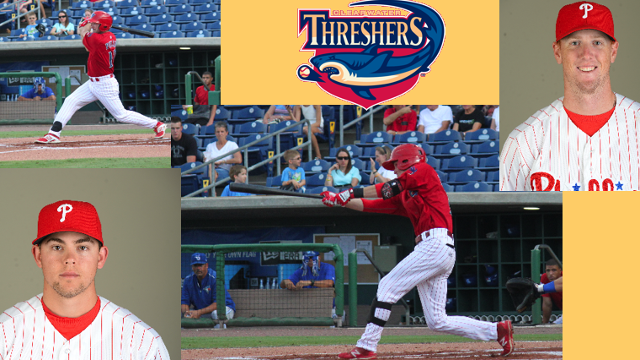 CLEARWATER, Fla. -- The Philadelphia Phillies farm system as a whole has improved exponentially over the last two seasons, evidenced in an overall minor league record of 447-391 in 2015.

The Phillies made seven major trades in the last year, bolstering their organizational talent pool by leaps and bounds. After Baseball America ranked the Phillies' farm system 22nd of the 30 teams entering 2015, the Phillies now rank No. 8 coming into this season. In fact, seven of Philadelphia's top-30 prospects were acquired in trades during 2015, and 13 of those top-30 have entered the system since December of 2014.

Last year the Clearwater Threshers emerged with the top overall mark in the Florida State League, rallying to win the first half in the FSL North, and cruising to a second-half title as well. After an impressive 2015 campaign, Clearwater returns the majority of its coaching staff this summer.

Greg Legg is back for his second-consecutive season at the helm, after the league's Manager of the Year led Clearwater to an FSL-best 79-58 record last summer. Legg embarks upon his 35th season in the Phillies' organization, having been drafted by Philadelphia in 1982.

Aaron Fultz is the sole newcomer to the Threshers coaching staff, as the former big-league hurler joins Clearwater from Lakewood, where he served as the pitching coach in 2015. Rob Ducey returns to the Threshers for his second season as the Clearwater hitting coach, while Mickey Kozack is back for his third year as the Threshers athletic trainer.

Right-hander Thomas Eshelman highlights the young six-arm mix that comprises the Threshers' opening rotation. Ranked by MLB.com as the Phillies' No. 15 prospect, Eshelman joined the Phillies organization after coming over from the Houston Astros as part of the Ken Giles trade in December. Eshelman was the second round draft pick by Houston in 2015 after helping lead Cal State Fullerton to the College World Series.

In his final collegiate season, Eshelman struck out 139 batters compared to just four walks, an astounding strikeout-to-walk ratio that paced the nation for the third consecutive year. The 21-year old debuted with two starts in the Gulf Coast League in 2015, before moving up to low-A Quad Cities.

Elniery Garcia will join him in the rotation after a solid full season in Low-A Lakewood. The 21-year old southpaw started 21 games and pitched to a 3.23 ERA. Garcia was consistent throughout the season - beginning on May 10, his ERA stayed under four through the remainder of the year, and only once did Garcia fail to last at least five innings.

At the age of 23, Ranfi Casimiro is the eldest of the bunch, as the 6'8" right-hander will make his Threshers debut after two full seasons in Lakewood. Casimiro finished ninth in the SAL in ERA (3.35) and sixth in WHIP (1.15), and cut his walk total by more than half from 2014 (65 BBs) to 2015 (30 BBs). Likewise, 21-year old Tyler Viza makes his high-A debut after lowering his ERA by two runs in his second season in Lakewood.

Lefty Matt Imhof returns for a second season in Clearwater after going 8-5 with a 3.94 ERA in 18 starts last year. Will Morris will join the Threshers as a starting candidate as well, following a summer in which the 22-year old put up a miniscule 1.64 ERA across 14 appearances at Lakewood.

The bullpen appears to be the team's strength entering 2016. The back-end will feature right-hander Matt Hockenberry and lefty Joey DeNato, who both served as closers for Lakewood last year. Hockenberry converted 19 saves in 22 tries for the Blue Claws, ranking second in the SAL in the saves department. A ninth-rounder out of Temple in 2014, Hockenberry finished with a 2.24 ERA in 42 games.

DeNato ended the year with three games up in Lehigh Valley after dominating for Lakewood, finishing with a 1.24 ERA in 43 games with the Blue Claws. The 24-year old converted 10 saves in 12 opportunities, and recorded an impressive 16 pick-offs. The lefty allowed just one run over his final two months (29.1 IP) in a Blue Claws uniform.

Joining them are Alexis Rivero - who collected seven saves of his own for Lakewood and three more for Clearwater last year - and fellow righty Jairo Munoz, who posted a 2.67 ERA with Lakewood and saved six games in the DSL. Munoz was originally signed by the Royals but found himself out of professional baseball in 2014. The Phillies signed him in January of 2015 and Munoz did not disappoint, compiling a 2.17 ERA in 24 appearances split between four levels.

2015 Threshers Jesen Therrien, Miguel Nunez, and Victor Arano return after strong seasons in Clearwater last summer. Arano, who started 22 games for Clearwater a year ago, is slated to begin the season in the Threshers bullpen.

Mark Leiter, Jr., John Richy, and Brandon Leibrandt - all of whom found success in Clearwater last year - will start the season on the Threshers disabled list.

With the top of the Phillies' farm system stacked with catchers, 2014 Thresher Gabriel Lino and 2015 Thresher Chace Numata will return as the Clearwater backstops.

Numata, 23, split time with Andrew Knapp and Willians Astudillo behind the dish last year, and threw out 37.5% while posting a .263 average in 73 games.

Second baseman Scott Kingery enters this season ranked by Baseball America as the Phillies' No. 14 prospect. After being drafted in the second round out of the University of Arizona last June, Kingery made the jump all the way to Low-A Lakewood, batting a steady .250 in his first professional season.

The 21-year old converted from the outfield after his first two collegiate seasons and was considered an advanced second baseman coming out of the draft. Kingery showcased solid speed and instincts on the base paths by swiping 11 bases in 12 attempts while with the Blue Claws.

Like Kingery, fellow 2015 draftee Kyle Martin made his professional debut in Lakewood last summer and performed admirably, batting .279 in 65 games. The first baseman out of the University of South Carolina is ranked as Philadelphia's No. 30 prospect after posting the third-highest slugging percentage on Lakewood in his debut season, collecting 19 doubles, four triples, and five home runs.

No. 12 prospect Malquin Canelo will return to start the season in Clearwater, after spending the latter half of 2015 in a Threshers uniform. Canelo is still only 21 years old, and showed a vast improvement in the power department by slugging .466 in 63 games in the first half with Lakewood last year. The shortstop - who posted just two home runs in his career prior to 2015 - finished with eight dingers combined between Lakewood and Clearwater.

After missing the majority of 2015 with a wrist injury, Zach Green is set to return to action this season. Green was a third-round pick out of Jesuit HS (CA) in 2012, and was the Phillies' No. 18 prospect entering 2014. Injuries have slowed his progress, but the 22-year old is just three seasons removed from leading the New York-Penn League with 13 home runs.

Mitch Walding mans the hot corner for the second-straight year, after a mechanical adjustment led to a 20-point increase in his average during the last month of 2015. Walding batted .317 in August and was 7-for-19 (.368) in September. A slick defender, he also finished tied for the second-best fielding percentage (.944) among third basemen who played at least 80 games in the FSL.

Drew Stankiewicz rounds out the infield after hitting .283 and playing all four infield positions combined between Lakewood and Clearwater last season.

Andrew Pullin returns to roam the Threshers outfield after tying for most homers in the FSL (14) and ranking fourth in RBI (73) in 2015. Both were career-highs for the 22-year old, who was named an FSL post-season All-Star.

Carlos Tocci is another familiar face, after splitting time between Lakewood and Clearwater in 2015. Tocci is ranked by Baseball America as the Phillies' No. 10 prospect. Now 20 years old, Tocci showed added power last year by compiling a career-high four home runs and 29 extra-base hits between the two levels. He was named to the SAL All-Star team after hitting .321 with the Blue Claws, and posted a solid .258 average upon promotion up to Clearwater.

Herlis Rodriguez earned a bump up to the Threshers for the playoff series against Daytona in September, and joins Clearwater's outfield following a breakout season in Lakewood. The 21-year old finished ninth in the SAL with a .294 average, belted a career-high 10 home runs, and led the Blue Claws with 61 RBIs.

Cord Sandberg moves up after he turned in a .255 average and drove in 59 runs with the Blue Claws in 129 games last summer. A dual-sport athlete who also starred as a football player at Manatee High School in Bradenton, Sandberg was selected in the third round in 2013. The 21-year old's average has climbed with each successive pro season, including a second-half last year in which he batted .290 in 68 games.

After a season in which the Phillies minor league system finished with the fourth-best overall mark amongst the 30 organizations, much of that talent pool is set to spill into Clearwater in 2016. The season kicks off on Thursday, April 7, as the Clearwater Threshers head to Florida Auto Exchange Stadium to battle the Dunedin Blue Jays at 6:30 p.m.