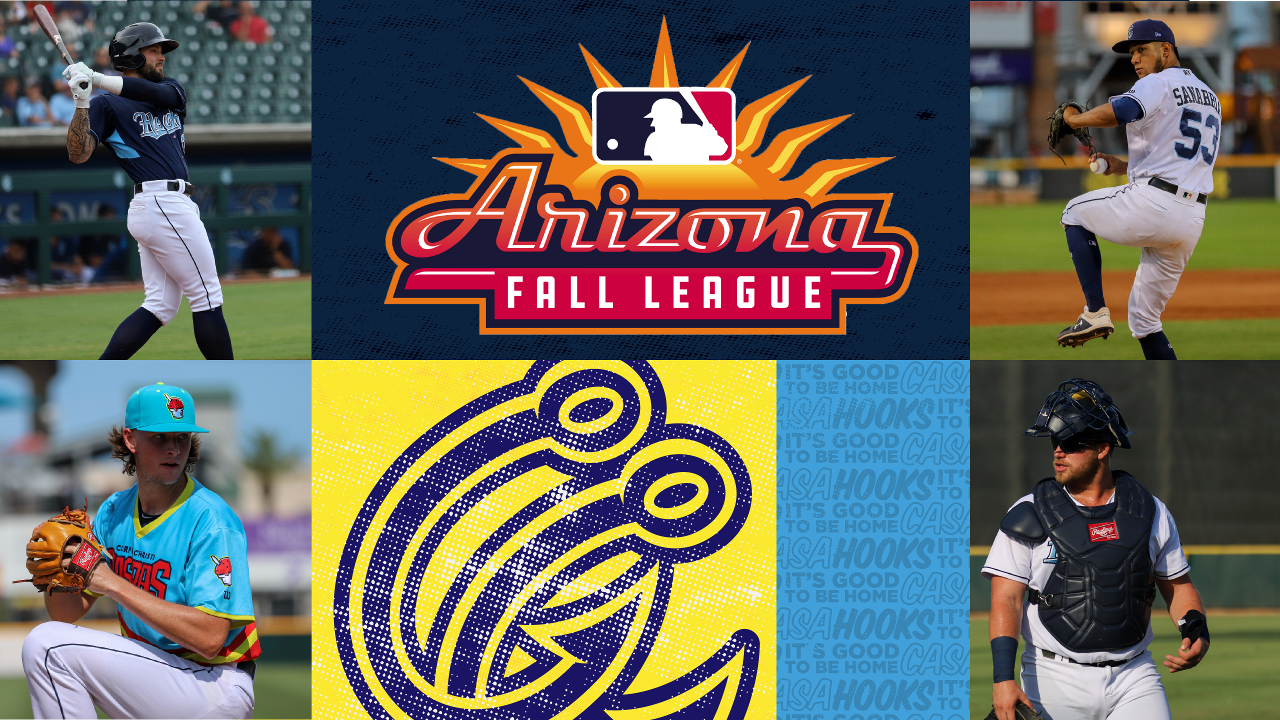 J.J. Matijevic, Forrest Whitley, Carlos Sanabria and Colton Shaver all played extensively for the Hooks in 2019 and will play for the Peoria Javelinas in the Arizona Fall League. (Photos by Olivia Rook/Corpus Christi Hooks)

The season picks back up Wednesday for select minor leaguers - including four 2019 Hooks players - with the start of the Arizona Fall League season.

Commonly known as the Fall League, the six-team circuit in the Phoenix area allows teams to send a handful of players for an extra month of development and game action. The Houston Astros, who were previously affiliated with the Scottsdale AFL club, are sending six minor leaguers to play for the Peoria Javelinas.

Before they departed the Hooks for the offseason, communications coordinator Dan Reiner caught up with the four headed to Peoria to get details of their assignments.

Though it's unusual for a player to spend two seasons in the Fall League, the Astros felt their top pitching prospect could use more work after struggling to begin the year with Triple-A Round Rock and subsequently missing a large portion of 2019 due to injury.

"It wasn't in the plans to go back there and it's obviously kind of a disappointment, but at the same time, it's necessary," Whitley said candidly. "Obviously, I missed a good chunk of the season this year, so it'll be a good opportunity to get some quality work in, get some innings in and hopefully just have a good performance like I did last year to propel me into 2020."

"The lineups that I faced there last year were really talented and I expect the same this year," he said. "I'll go in with the same mentality to just be myself. That's what I did last year and if I execute, I should have some pretty good success."

The San Antonio native, who turned 22 on Sunday, said there's nothing specific he or the Astros plan to focus on besides the normal routine of working on command and mixing pitches.

"A little bit of a mechanical change, a little bit of a pitch usage change," Whitley said. "Other than that, just kind of continue those things. The last few outings I had here were pretty solid, so just continue doing that when I'm there."

The University of Arizona product and 2017 Competitive Balance Round B draft pick will get nearly six weeks to make up for lost time due to a 50-game suspension he received this season.

"It's never good to miss games, but I missed 50 this year," Matijevic said. "To come back, play well and just learn from that experience to take into the Fall League, I'll definitely do that and try to get better and try to get as many at-bats as I can."

After batting .251 with 11 home runs and 37 RBIs in 78 games between Corpus Christi and Advanced-A Fayetteville, Matijevic, Houston's No. 18 prospect according to MLB.com, and Hooks hitting coach Tim LaMonte discussed using the Fall League to focus on his hitting mechanics. Having the chance to return to his old stomping grounds is just a bonus, he said.

"I can't wait to get back to Arizona," Matijevic said. "Last offseason was the first time I hadn't been there in probably five years. Going back there now is really exciting and I can't wait to stop down in Tucson when I get out there and see my old coaches."

Matijevic will play mostly at first base, though he could see some time in the outfield.

A catcher in high school and at Brigham Young, the Astros converted Shaver to an infielder after drafting him in 2017. That lasted until this year, when an organizational shortage at catcher led Houston to give him a chance behind the plate.

He started nine games at catcher for Fayetteville and 20 games there for the Hooks, combining to throw out 26 percent of would-be base stealers and allowing only four passed balls. The Astros are sending him to the Fall League to continue his development.

"Working on catching in general, working on my footwork, my blocking, my receiving, pitch-calling. Having it as a new position, I've got to improve on all of that," Shaver said. "It'll be good for me to get those extra reps before next season."

The Fall League notoriously draws many of the game's top prospects and this year is no different; MLB.com's No. 4 prospect Jo Adell, No. 7 Royce Lewis and No. 19 Joey Bart are among those slated to play. Despite being a 39th-round draft pick, Shaver said he's proven himself as a prospect and is ready to take the field with and against some of the game's best.

"The draft says a lot, but I know what my work ethic means to me and I know what I'm capable of," Shaver said. "I'm always going to work to be the best player I can be each and every day. Playing out there, their names are who they are and they're definitely top players for a reason. I'd like to go out there and compete and show what I can do as well."

One of the under-the-radar pitching prospects in Houston's system, Sanabria is getting an extended look with his Fall League assignment.

"I feel very privileged to get this opportunity to get the Astros to see me develop and work with me to improve as a pitcher," Sanabria said through a team translator.

He said his goal is to keep working on his command and improving his repertoire.

The Arizona Fall League begins play September 18 when the Javelinas take on the Salt River Rafters at 8:30 p.m. CT. The 2019 Fall Stars Game will be held Saturday, October 12, and the league's Championship Game is on Saturday, October 26.